It is with much sadness and great appreciation that this month’s column is written in memory of Amy Messier, who passed away unexpectedly on December 4, 2021. Amy had been a volunteer at Duck Pond Wildlife Rehab Center in Vassalboro for almost 20 years. Although unable to work most of this past year due to a couple of surgeries, she was looking forward to resuming her critter care this coming spring. 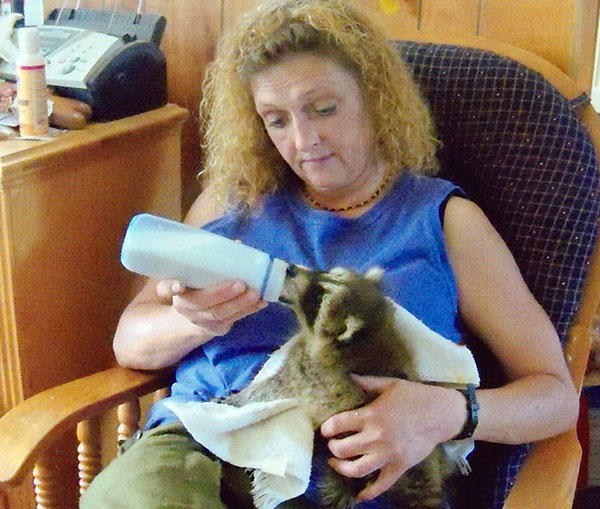 Amy was born in Rhode Island in June 1962 and is survived by two sisters, two brothers, and several nieces and nephews. According to her obituary, she held various clerical and administrative positions, including as a Human Resources Director, but her passion was her deep love for animals. She volunteered as a wildlife rehabilitation technician at several wildlife rehab centers across the country before moving to Vassalboro, where she met Don and Carleen Cote at Duck Pond. She devoted countless hours cleaning and disinfecting cages, as well as feeding and tending to the needs of hundreds of young, sick, and injured wildlife.

I met Amy in late 2019, when I began writing Critter Chatter following the passing of Don’s wife, Carleen. If I remember correctly, Amy was preparing meals for resident opossums and porcupines, but it didn’t take long for me to learn that her favorite critters were the young raccoons. From several posts I’ve seen on Facebook, she was always willing to help other rehabbers learn “tricks of the trade,” and her passing is truly a loss not only to family and friends, but to the wildlife community.

I recently asked Don if he had any special stories about Amy. He said when she first started as a volunteer, she worked very closely with Carleen, as they both had a fondness for raccoons. He remembered a five-year period when there was an explosion of injured, sick, and orphaned raccoons, ranging from 135 to a high of 194 admissions annually. Amy and Carleen certainly had their hands full, and their common interest led to a special friendship. After Carleen’s passing in 2018, Amy was in charge of the raccoon admissions and oversaw their care.

In addition, she was the computer whiz kid. Don doesn’t have a computer, but Amy used her own to set up an email account for Duck Pond, as well as a Facebook page (neither are currently monitored or maintained, so please do not use until further notice). Don noted that Amy often used the internet to order various supplies, query diseases and treatment information, and established multiple, invaluable contacts with other rehabbers.

While looking through some of Carleen’s older columns, I found one from 2008 in which she wrote the following:

“A volunteer, Amy, and I check all the tarps to cover the pens for tears to see if they need to be repaired or replaced. In years past, we have attached the tarps with bungee cords. These became playthings for the raccoons to chew on, then with a strong wind, the tarps would blow off the pens. This year we changed our game plan. We would anchor the tarps with wire.

We gathered up all the needed materials, opened the tarps, and decided which way they go over the pens (most of the time, we get it wrong, putting the short side over the pen and having to start over again!). This whole process requires climbing up on ladders. One day, after having to climb across the top of the pen, then moving back to the ladder and attempting to step down, the ladder fell over. Hanging by my elbows, I screamed for Amy to come to my rescue! Of course, the curious raccoons wanted to join in the fun and grabbed at the tarps and wire and played with my hair.”

It’s easy to envision this scenario playing out, I’m sure with laughter punctuating the yells for help.

I didn’t know Amy well, but our love for animals was obviously a common denominator. We had texted right before Thanksgiving, and she was upbeat, anxious to resume tending to her furry friends and offering the TLC she so generously provided. She will be greatly missed.

The continued assistance from other rehabbers is truly appreciated as Don has had to cut back on admissions and long-term residents. We ask that you check these websites to see if there is a rehabber closer to you to help make critter care at Duck Pond more manageable: https://www.mainevetmed.org/wildlife-rehabilitation or https://www.maine.gov/ifw/fish-wildlife/wildlife/living-with-wildlife/orphaned-injured-wildlife/rehabilitation.html Donald Cote operates Duck Pond Wildlife Care Center on Rte. 3 in Vassalboro. It is a nonprofit State-permitted rehab facility supported by his own resources & outside donations. Mailing address: 1787 North Belfast Ave., Vassalboro, ME 04989 Phone: (207) 445-4326. email: thewildlifecarecenter@gmail.com (please note: this email address is not being monitored at this time)