All wild animals are hosts to parasites: internal, such as tape, hook, pin, or round worms, or external, such as mites, ticks, and fleas. Some of these little buggers (literally!) are also zoonotic (as noted in May’s article about rabies) and can infect animals as well as people.

Mange is an itchy skin disease caused by mites that burrow and feed under the skin or hair follicles. It’s common in foxes, but sometimes porcupines and raccoons suffer from it as well. Hair loss and crusting from scratching and biting are usually seen and may result in secondary skin infections and poor general health. Sadly, Donald Cote of the Duck Pond Wildlife Care Center in Vassalboro has had first-hand experience with this intense skin itching after disposing of a dead fox he found in the woods; a trip to the ER confirmed diagnosis and he endured several weeks of treatment. 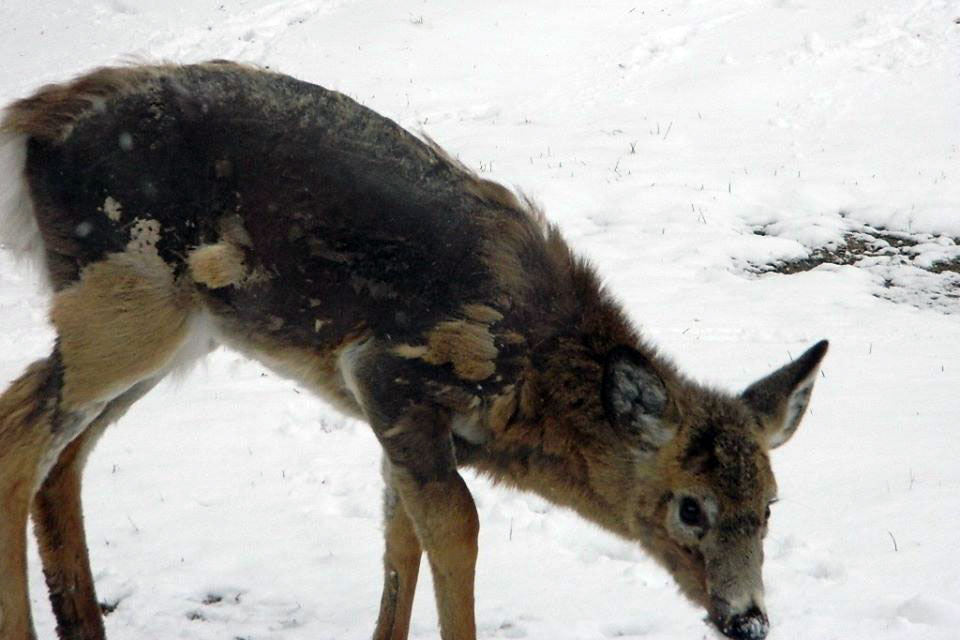 Animals suspected to have mange must be isolated from others. It is imperative to provide consistent treatment, with thorough spraying and cleaning of pens, bedding (hay is burned), and feeding dishes. Treatment is typically an oral paste and/or topical rinses over three to five weeks; correct dosage is important, especially in small animals, as too much can be toxic and cause death. When ready for release, the animal is relocated to a totally different place in the wild than where it was found to avoid re-infestation from shared dens or litter mates in the area. In fact, the site should be avoided for any release for a full year. I found it interesting to learn that although the Cotes had been assured that any mites left in the ground during the fall would freeze over winter, they later found that mites not only survived cold temps, they also moved 25 feet away to other enclosures!

Duck Pond’s first case of parvo virus was in 1991. Parvoviruses affect carnivore species, are highly infectious and environmentally persistent. Transmission occurs when the virus is shed in the feces of an infected animal and ingested by another; young animals are at greatest risk, especially among litter mates. Clinical signs include lethargy, depression, lack of appetite and after a few days, vomiting and diarrhea. The virus can be detected in fecal samples or tissue cultures.

Carleen wrote a column about its heartbreaking devastation: of 50 raccoons she had cared for, many since infancy, only nine survived. Despite extensive decontamination of the building with chlorine bleach, it resurfaced in July 1992, with only seven of 40 raccoons surviving. The next three years were disease-free as the Cotes isolated raccoons as they arrived until they were relatively sure they carried no diseases.

There is no cure for parvo and it can live in the ground for years, even in the absence of sick animals. It is very difficult to treat and control once a facility has been contaminated and is resistant to many common detergents and disinfectants, as well as to changes in temperature and pH. Although the incubation period in wild animals is extremely variable, new admissions are typically quarantined for at least two weeks and ideally tested before being in contact with other animals. Quarantine is for animals that have potentially been exposed, while isolation is for infected/symptomatic animals. A parvo isolation area must be a separate, easily disinfected area (a physically separate building is recommended) with dedicated equipment and restricted access; protective clothing should be required when entering the space (boots, gloves, water-resistant clothing). There is a canine vaccine  that is typically given to kits at six weeks of age, but it’s semi-live and doesn’t necessarily kill the virus in raccoons. Donald now prefers to send raccoon intakes to other wildlife rehabbers until they are determined to be parvo-free. Donald Cote operates the Duck Pond Wildlife Care Center on Rte. 3 in Vassalboro. It is a nonprofit federal and state permitted rehab facility which is supported by his own resources and outside donations. Mailing address: 1787 North Belfast Ave., Vassalboro, ME 04989 TEL: (207) 445-4326 EMAIL: thewildlifecarecenter@gmail.com