Critter Chatter – Oh, Deer! What’s Up With That? Part 2

As a follow-up to last month’s article about the whitetail buck with three legs and only one horn, I’d be remiss not to write about the other permanent resident buck at the Wildlife Center. Rather than simply missing an antler, this deer has two, but they’re both deformed and remain in velvet. He’s the oldest deer at Duck Pond Care Center, at about 10 years old (the average age in the wild is four to six years).

Don couldn’t recall the specifics of where this buck had come from or under what circumstances, except that he had been living in captivity since he was a fawn. Most of his life had been spent under the care of a well-meaning individual who could no longer provide the upkeep and attention required, so he came to Duck Pond. Don always contacts local zoos or game farms in an attempt to place older animals, but these facilities typically want young critters. Because this adolescent buck had been around humans all his life, releasing him would likely have resulted in an untimely death sentence, so he has remained with Don as part of the small, non-releasable herd. 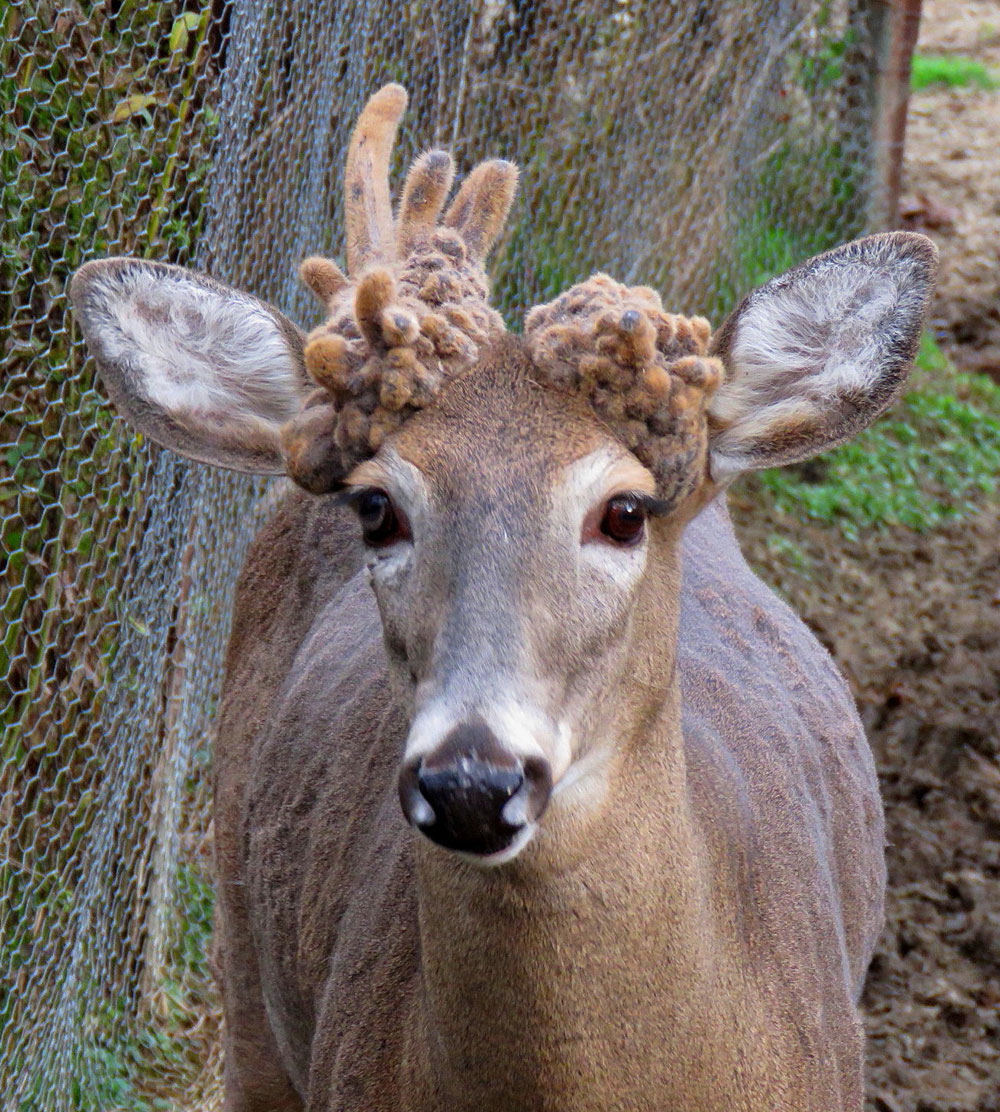 As noted in last month’s column, missing antlers or deformities are not that uncommon. In fact, research demonstrates that more than half of wild bucks have a genetic potential for abnormalities. There are a variety of reasons: skull trauma (often due to fighting); antler or nerve damage during growth; healed leg fracture/injury; insufficient testosterone; disease or infection; systemic problems; age; and genetics. The abnormality usually recurs throughout the deer’s life, unless it’s due to a skeletal injury, in which case it may gradually disappear with each annual antler cycle.

Antlers are comprised of fast-growing tissue, capable of growing up to an inch or more per day during peak development in spring/summer. The increased daylight hours of spring and over the summer prompt the pituitary gland to produce hormones, which in turn release an “insulin-like growth factor” that stimulates antler growth. “Velvet” is the thin layer of hairy skin that covers growing antlers in early spring. Normally, in preparation for fall breeding season, blood supply to the velvet stops, causing it to dry and fall away from the calcified cartilage of the hardened antler. Damage to an antler during the velvet stage can result in antlers growing in weird shapes or strange directions, but more often they’re the result of reduced hormones.

As I wrapped up my note-taking from talking with Don, I left him to safely trap a chipmunk that had slipped past him as he moved the little guy from the incubator to a small cage. There’s never a dull moment at Duck Pond Care Center!

Although admissions usually slow down at this time of year, Don will get calls from folks worried about young animals now on their own, adjusting to life in the wild without their mothers’ care. Some are simply learning how to be independent, but others may indeed be orphaned or injured, struggling to survive. While Don continues to take them in, he does transfer rescues to other rehabbers who are generously providing assistance to help keep critter care at Duck Pond manageable. Please check the following websites to see if there is a rehabber near you: www.mainevetmed.org/wildlife-rehabilitation or www.maine.gov/ifw/fish-wildlife/wildlife/living-with-wildlife/orphaned-injured-wildlife/index.html – Donald Cote operates Duck Pond Wildlife Care Center on Rte. 3 in Vassalboro. It is a nonprofit, State-permitted rehab facility supported by his own resources and outside donations. Mailing address: 1787 North Belfast Avenue, Vassalboro ME 04989 Phone: (207) 445-4326. Please note that the prior wildlifecarecenter email address is not being monitored at this time.