Facebook wildlife and rehab groups often share photos of interesting critters, but I don’t know how many readers have ever seen a piebald animal. My husband and I were fortunate to see a wild piebald deer in the Hancock area a couple of years ago, and when I recently came across old photos of a piebald fawn, porcupine, and woodchuck cared for at Duck Pond Wildlife Center, I thought it would be a good topic for a column. 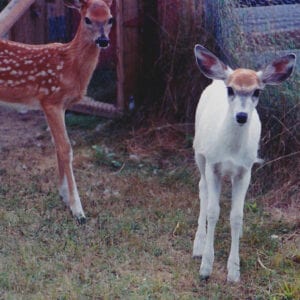 Most people are familiar with albino coloration, or lack thereof. There is no such thing as “part albino” — albinos are ALL white due to the absence of color pigmentation (melanin). Although typically recognized by their pink or red eyes (caused by blood vessels showing through the unpigmented iris), not all albinos have this dramatic-looking eye. Albinos in the wild are very rare in any species. Because they stand out and are easy prey, most die at a young age, and their poor eyesight contributes to their difficulty in finding food and avoiding predators.

Albinism is often confused with “leucism,” which is another genetic condition that occurs during an animal’s embryo development. Leucism is the partial loss of pigmentation resulting in white, pale, or patchy coloration of skin, hair, feathers, or scales. Leucistic birds have fully white plumage, but unlike albinos, have normal-colored eyes, legs, feet, and bills. While leucism does occur naturally in wild birds, it is typically seen in captive or exotics deliberately bred to encourage this type of genetic mutation.

More common than a complete absence of pigment cells is the “piebald” effect, which are localized, irregular patches of white on an animal that has otherwise normal color patterns. The word originates from “pie” (as in the black and white plumage of the magpie) and “bald” meaning white patch or spot. Although I knew “piebald” is used to describe white pigmentation, I didn’t realize how varied it can be.

A pied animal has a pattern of unpigmented (white) spots on a pigmented background of hair, feathers, or scales; the skin under the white background is not pigmented. The ratio of white to normal-colored skin can vary considerably between generations, as well as between siblings from the same parents. Piebaldism is a recessive trait, so both parents must carry the gene to produce piebald offspring. In addition to the rare coloration, it will likely have a “Roman” nose, short legs, overbite with short lower mandible, and scoliosis (arching spine). This condition is very rare and affects less than 2% of the white-tailed deer population. 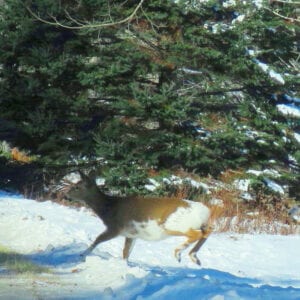 A piebald doe in Hancock, Maine. Photo by Jayne Winters

We more often see piebaldism in horses (called “pintos” or “paints”), as well as in cattle, dogs, cats, foxes, squirrels, pigs, and snakes. Dogs that may have a spotted or multicolored coat are often called piebald if their body is almost entirely white or another solid color with spotting and patches on the head and neck. The beagle’s tricolor is actually caused by the piebald gene — we learn something new every day! So, the next time you see a wild or domestic critter with white patches or spots, just think about those behind-the-scenes gene work that created it — a true gift of nature.

As noted in April, Donald and Amy are dealing with health issues, so the Care Center is receiving assistance from other rehabbers to help with admissions. We ask that you check these websites to see if there is a rehabber closer to you to help make critter care at Duck Pond more manageable: www.mainevetmed.org/wildlife-rehabilitation or www.maine.gov/ifw/fish-wildlife/wildlife/living-with-wildlife/orphaned-injured-wildlife/rehabilitation.html