Donald Cote and his late wife have operated the Duck Pond Wildlife Center for more than five decades. Five decades of 24/7 devoted care to nature, large and small, furred and feathered. While we naturally prefer to hear about the successful stories, the “feel good, happily-ever-after” anecdotes, there are certainly sad outcomes which are inevitable in this type of rescue work.

My visits with Don are never boring; he’s a wonderful storyteller, animated, and at times, quite outspoken in expressing his opinions. An hour passes quickly and I must admit, it would be easy to stay longer to chat except for the nagging thought that I’m preventing him from many chores. One story he has wanted to share for some time is about three deer that wandered into a junkyard through a gate which had been left open. 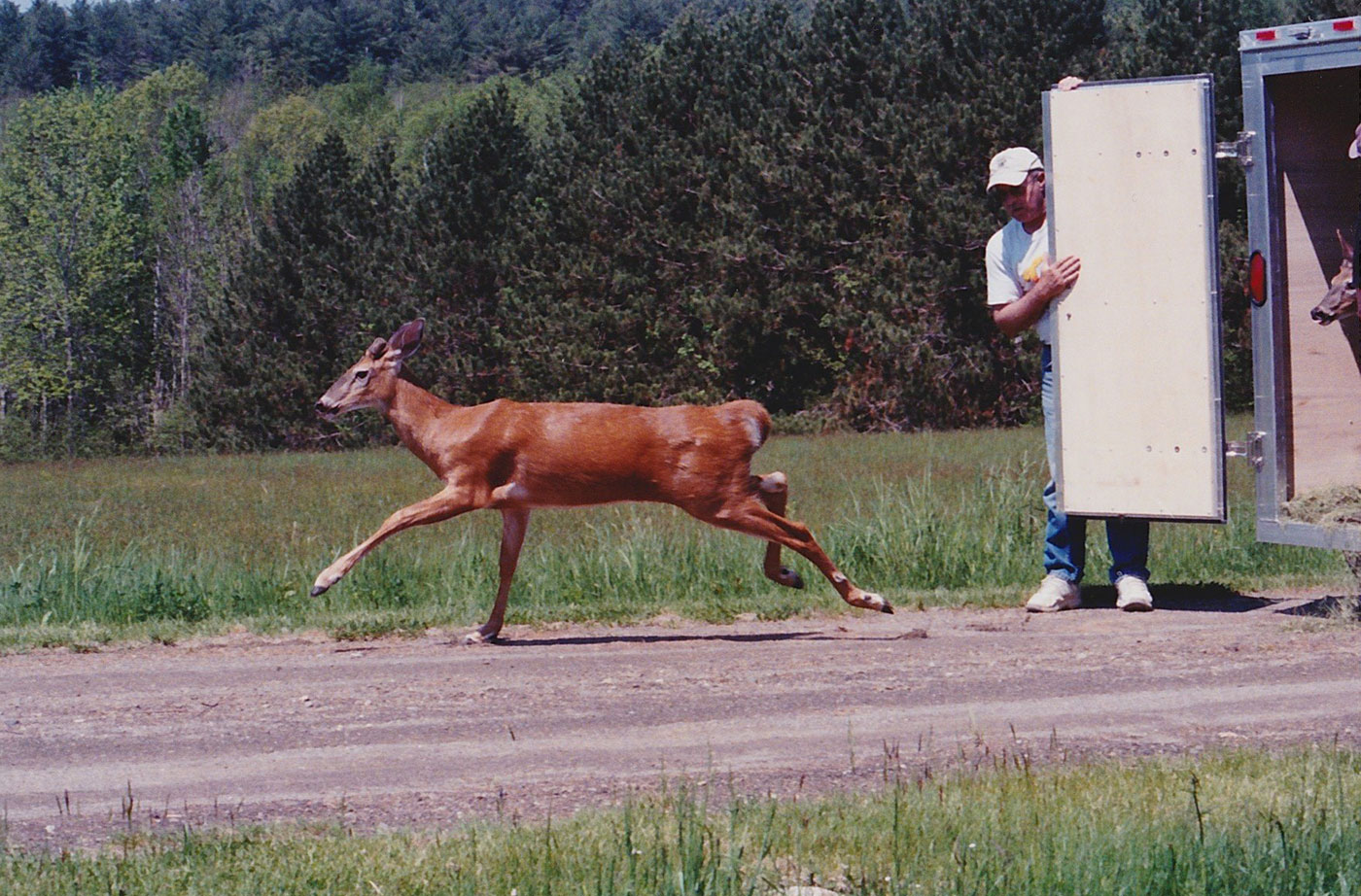 Following an urgent call about a doe and two youngsters, likely her yearling and new fawn, being confused and trapped by the yard’s fencing, Don met with an employee and the town’s Animal Control Officer (ACO) to assess the situation and hopefully rescue the deer. An attempt to encourage the deer to move out of the enclosure by slowly driving a truck to “herd” them resulted in their jumping into a 100’ x 50’ six-foot-deep, lined pond which was on site to catch vehicular oil. The local fire department was contacted and responders were able to encourage the deer to get out of the pond; two deer left the area by an open gate, but the smallest one – about six months old and 75 lbs. – remained, and in a panicked state, just kept running along the fence line. The decision was made to leave it alone overnight in the hopes it would calm down and find its way out.

The next day, however, the fawn was still there, butting its head into the chain link fence in its attempt to get out. Don met several volunteers at the site, and the deer was ultimately cornered and put into a trailer for transport to Duck Pond for observation. He was transferred to a large pen, given food and water, and closely monitored. Two days later, he appeared to have a seizure, likely from the repetitive head butting into the junkyard fence. An anti-inflammatory injection often used for prevention of seizures was given, but without any real change in behavior; sadly, the fawn suffered another episode a couple of days later and was found dead shortly thereafter. Although it was obvious that the stress of the previous few days, along with a probable head injury, caused the deer’s death, Don still wonders if it was by seizure(s) or possibly a heart attack.

Despite the best efforts of many caring people, outcomes are not always positive and there may not be definitive answers as to why. Helping wildlife is certainly not an easy task, but the reward of seeing a rehabilitated animal released into its natural habitat again far exceeds the disappointing losses. Donald Cote operates the Duck Pond Wildlife Care Center on Rte. 3 in Vassalboro. It is a nonprofit federal and state permitted rehab facility which is supported by his own resources and outside donations. Mailing address: 1787 North Belfast Ave., Vassalboro, ME 04989 TEL: (207) 445-4326 EMAIL: thewildlifecarecenter@gmail.com