Critter Chatter – Gray Fox: In a Class of Its Own

Don Cote of Duck Pond Wildlife Rehab has a soft spot for foxes. Although he rehabs mostly reds, I sense he’s partial to the grays. When I visited a few weeks ago, he led me to an enclosure that housed a beautiful gray fox, which will be released this spring, and proceeded to explain the differences between the two species.

Maine’s red fox population is widespread, occurring in all 16 counties. Adults weigh 7-15 pounds and are red/orange in appearance with a white chest, black legs, and bushy white-tipped tail. The gray fox is most often found in central, Midcoast, and southern Maine, although Don stated there is evidence it’s moving north. They weigh about 10 pounds and are “grizzled” in coloration, with a mix of white, red, black, and gray fur, often with a touch of red on the neck, ears, and lower legs. They are easily discerned from reds by the black stripe down their tail with a prominent black tip at the end, with the tail making up almost one-third of their total body length. The gray has fairly short legs, with an elongated torso in comparison to other foxes. Its eyes are oval-shaped, with a thick black stripe running from the inner corners down to its mouth.

Both species have excellent hearing and eyesight, which prove particularly useful when hunting for prey hidden under the snow or ground. Both species are primarily nocturnal, but are seen during the day especially in spring and summer when hunting for their young families. They eat a wide variety of plants and animals, depending on the season, including small birds, eggs, mice, voles, rats, rabbits, insects, snakes, carrion, berries, apples, corn, seeds, and nuts. Foxes are found in diverse habitats and do well in a mix of fields and forest; the loss of natural habitat, however, has forced them to adapt, and they’ve become quite tolerant of living near people. 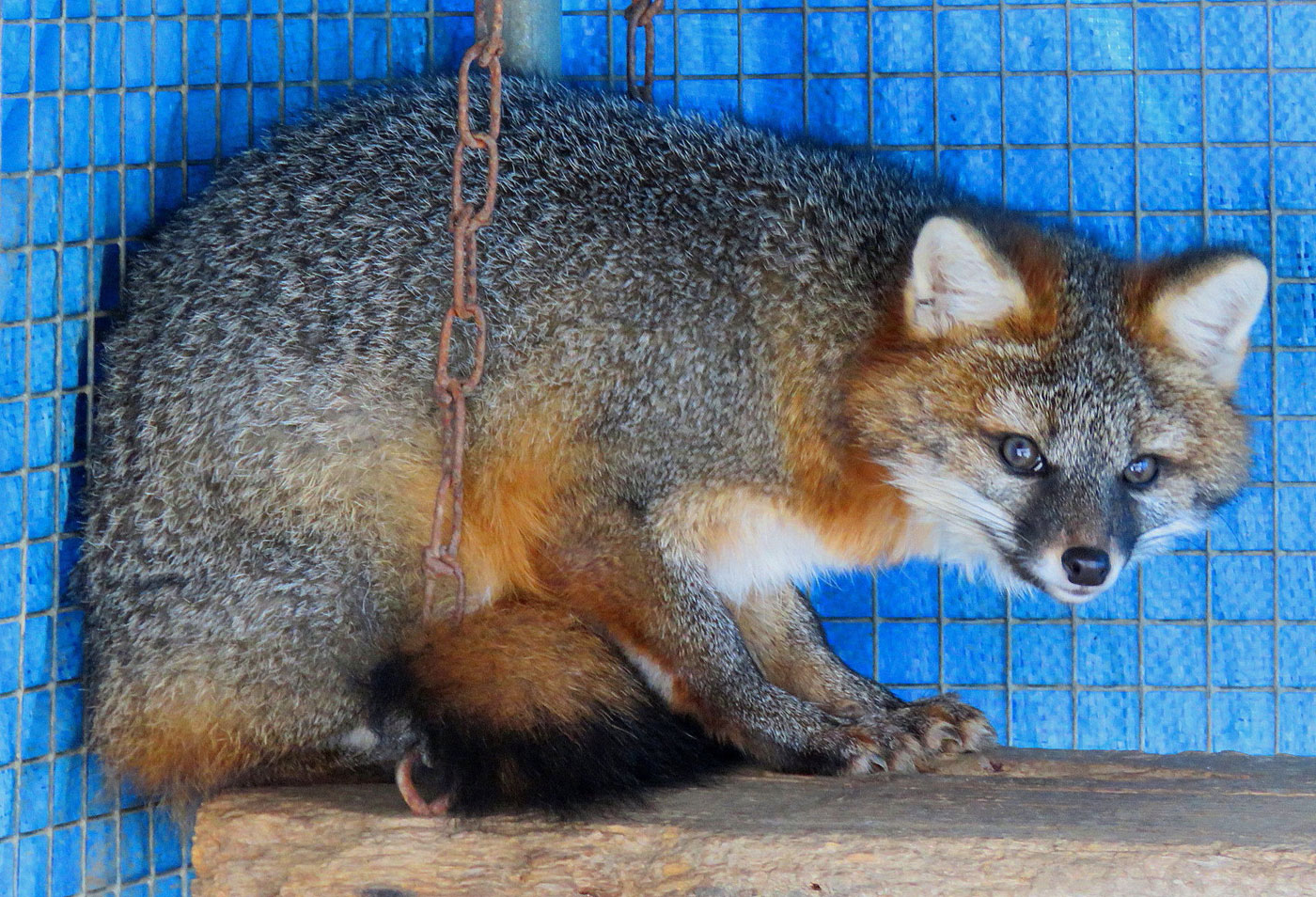 Important to note, however, is that the gray fox isn’t simply a gray-colored red fox—it belongs to a different genus altogether. DNA testing reveals it isn’t closely related to other canines and is likely the oldest fox species in the world – more than 10 million years old! It isn’t really known why they’re so different, but one theory is that they may have been isolated to a particular area of the world and needed to develop certain characteristics to survive. Like a cat, its nails are retractable, making it the only member of the canid (dog) family in North America that can easily climb trees (reds climb, but not as well as grays) and jump from branch to branch. Their sharp claws give them the ability to climb as high as 50 to 60 feet, aided by forearms which can be rotated.

In doing further research, I found that the gray fox has a body built for speed, easily reaching 28 miles per hour. It loves to swim and utilizes ponds/lakes by chasing its prey into the water. Due to its build and stamina, the fox doesn’t tire easily, but the prey will become exhausted, making it vulnerable to drowning, after which the fox retrieves it.

Don told me they admit only one to four gray foxes a year and shared the sad story of two that had been hit by a car. Both were taken to the vet for evaluation and although neither had fractures, died of internal injuries within hours. Another gray that came to Duck Pond Rehab had come into contact with a porcupine, its mouth and snout filled with quills. For those who don’t know, porky quills are extremely painful and can be life-threatening. They have to be removed in one piece very carefully with pliers, as if broken or missed can migrate to other parts of the body. Although Don and Amy, a longtime volunteer at the Center, removed the quills, the fox had to be tube fed until it could see the vet, but sadly died before the appointment.

The gray fox currently in residence was admitted this past fall and will be released in the spring.