I wasn’t sure what this month’s article would be about, but after just a few minutes of talking with Don, we agreed a thank-you was in order to some local farmers who recently helped during a shortage of fresh milk for this year’s fawns. 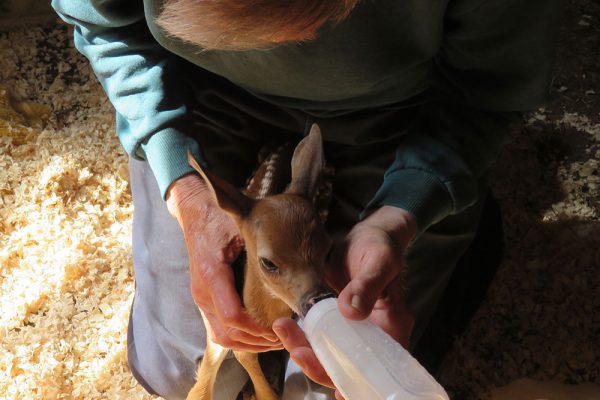 When I visited Duck Pond Wildlife Rehab in June, I was immediately drawn to one of the newest admissions: a days-old fawn whose mother had been hit by a car. She was one of about 16 Don has cared for so far this summer and after a little urging from Don, quickly drained her noontime bottle. Although one of Don’s “favorite” critters (the other being foxes), fawns require 24/7 care due to their feeding schedules. Don usually orders powdered milk from a company in Arizona in anticipation of many injured or orphaned coons and fawns arriving in April/May. The company makes milk that is protein/fat specific for wild animals in zoos and those in the care of rehabbers. The obvious advantage of the dry form is you make only what you need so nothing is wasted or spoils; the liquid is warmed in the microwave, but is only good for 24 hours. The cost is $200/pail, plus shipping, and Don typically uses eight pails a year. For the very young fawns, he prefers to feed with fresh goat milk that he’s been able to obtain locally, averaging 165 gallons/year. Luckily, fresh milk can be frozen until needed. The first morning feeding is 6-7AM, with subsequent bottles provided every six hours around the clock. Even though they’re hungry, some fawns – especially the youngest – are reluctant to take a bottle. Changing the nipples on the bottle often does the trick, but by then the milk may need to be warmed again. Fawns will drink milk until Labor Day and then gradually switch over to grass, leafy greens (clover, dandelions, etc.) and finally, grain.

Last month found Don in dire need of goat milk as the order from Arizona had been delayed. I contacted Jamie and Heidi Bray, friends of mine who have a small farm in Somerville. I had recently visited their newborn goat kids and knew mom Kiwi was providing a good supply of milk. They were happy to drop some off at Duck Pond and put Don in contact with good friends Anil and Kelly Roopchand, who own Pumpkin Vine Family Farm, a pasture-based goat dairy also located in Somerville. Don made a drive out to the farm and was duly impressed with the tour and milking operation by Anil’s and Kelly’s son, Keiran. He was especially appreciative of the milk donations: neither the Brays nor the Roopchands would accept payment. In addition, Don has been in contact with Tom and Lynn Ryan of Little Valley Farm in China, who have supplied him with fresh goat milk for years. With another possible Winslow source, it looks like he and the fawns are all set for the summer! 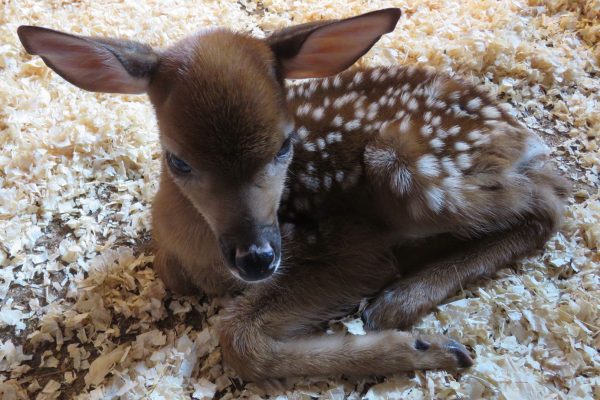 Once the fawns are large enough to fend on their own, they’re released in the group they were brought up with rather than individually, as there’s more security in numbers. And Don is adamant about not releasing after October, right before hunting season.

As I got ready to leave, Don had a call from an IF&W biologist about four gray squirrels whose nest had been accidentally displaced by CMP workers repairing a line. After assessing them, they’ll likely be transferred to another rehabber in Boothbay for further care. I also got a few photos of a gray fox kit that was too small for an outside pen and was being housed in a dog carrier in the house. You never know what you’ll find at Duck Pond!

Don continues to keep admissions and long-term residents at a limited number by transferring many rescued critters to other rehabbers who have generously offered to assist in their care. Please check these websites to see if there is a rehabber closer to you to help keep critter care at Duck Pond more manageable: www.mainevetmed.org/wildlife-rehabilitation or www.maine.gov/ifw/fish-wildlife/wildlife/living-with-wildlife/orphaned-injured-wildlife/index.html – Donald Cote operates Duck Pond Wildlife Care Center on Rte. 3 in Vassalboro. It is a nonprofit, State-permitted rehab facility supported by his own resources and outside donations. Mailing address: 1787 North Belfast Avenue, Vassalboro ME 04989 Phone: (207) 445-4326. Please note that the prior wildlifecarecenter email address is not being monitored at this time.