Typically, one or two fishers are brought to the Wildlife Center each year for rehabilitation. I’ve only seen photos of them, so was interested in learning more after discovering one was in residence with Don Cote this past summer. And when I say “in residence,” I mean that literally, as it was kept in a carrier in the living room for several weeks because there was no outside pen available. Discovered in the Bangor area without siblings or mother, the fisher wasn’t old enough to survive on its own. Don arranged transfer with the woman who found it and assumed its care on May 29. 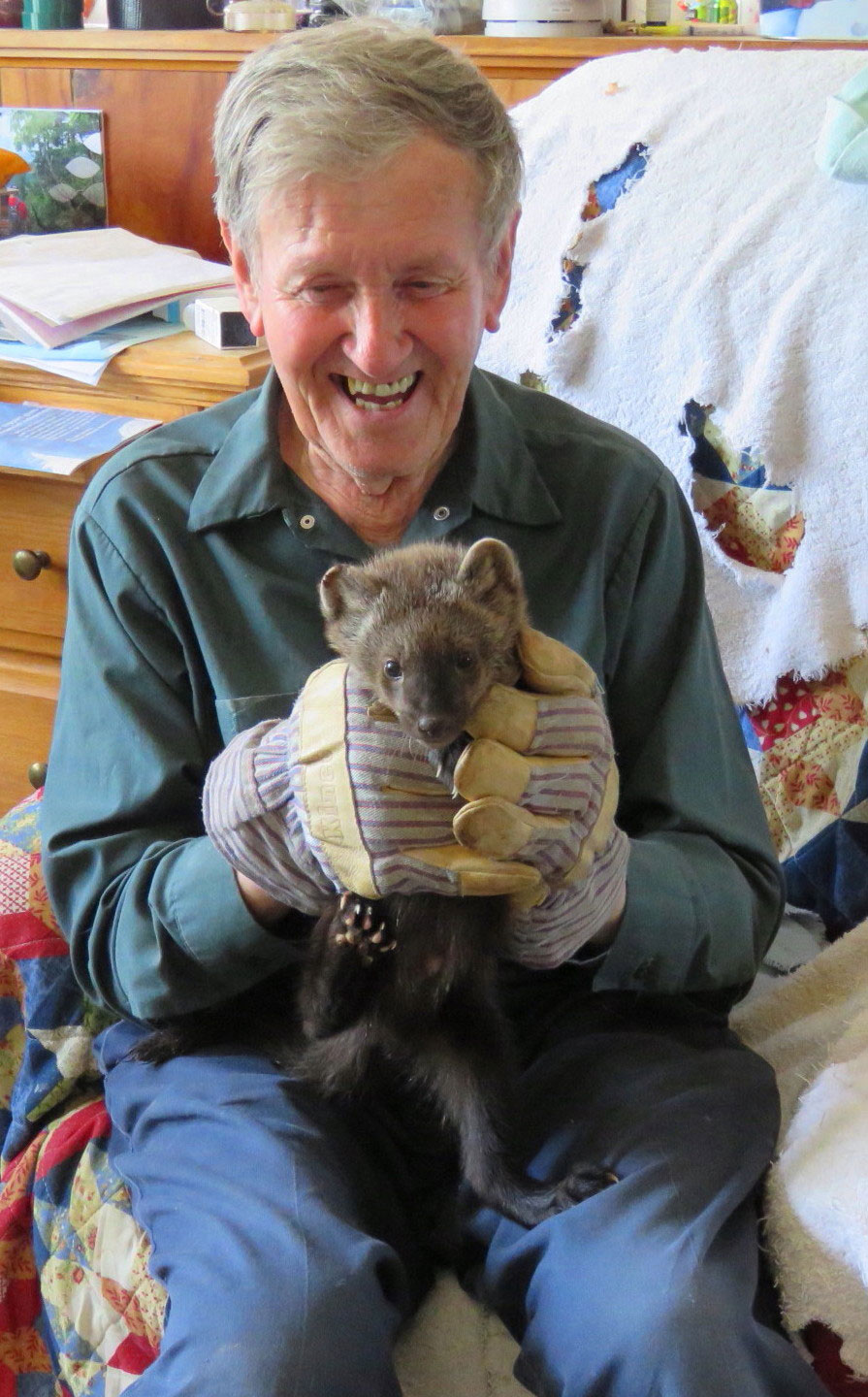 Donald Cote with a young fisher rescued in Maine. Photo by Jayne Winters

A member of the weasel family, fishers are comparable in size to house cats. They are native to North America, primarily in Canada’s boreal forests and the northern United States, although fossil evidence indicates their range used to extend farther south. Often referred to as a “fisher cat,” it’s not a cat at all, and despite its name, rarely eats fish. An agile climber and solitary hunter, it forages around fallen trees feeding on a variety of small animals (primarily snowshoe hares and porcupines), supplementing its diet with birds, insects, nuts, berries, mushrooms, and road kill or carrion. I found it interesting that a Maine wildlife study documented 14 fisher-caused mortalities of Canada lynx from 1999-2011.

Fishers are active year around, most often at dawn and at night. They can become pests to farmers when they raid chicken coops and, although stories of them preying on cats and small dogs have been reported, a 1979 New Hampshire study revealed cat hairs in only one of more than 1,000 stomach samples. Studies in New York and Massachusetts found no cat remains in 24 and 226 scat or stomach samples, respectively.

Adult males are usually 35-47 inches long and weigh 8-13 lbs.; adult females are 30-37 inches long and weigh 4-6 lbs. Their bodies are long, thin, and low to the ground. Five toes on each foot, with unsheathed retractable claws, make it easy for them to move on top of snow. Coarse hairs between the pads of the hind paws give them traction for walking on slippery surfaces. In addition, they have highly mobile ankle joints that can rotate almost 180° allowing them to maneuver well in trees; they’re one of few mammals with the ability to descend head-first!

The reproductive cycle lasts about a year, with mating in late March/early April, but full development of the embryo is delayed 10 months before active pregnancy begins. Dens are typically in hollow trees and after about 50 days, females give birth to a litter of three or four kits. They can crawl after three weeks, but don’t open their eyes until seven weeks and are dependent on mother’s milk for two to three months. At five months, mom pushes them out of the den and within a year, they establish their own range of 3-5 square miles.

Fishers have few predators besides humans. They’ve been trapped since the 18th century and with pelts in big demand, were eradicated from several parts of the U.S. by the early 1900s. The fur varies, being denser and glossier in the winter after a summer molt, and males’ coats are coarser than females. Color ranges from deep brown to black, with patches of white or cream on the underside. Prices for pelts ranged from a high in the 1920s and 1930s of $450-$750 to a low of $27 in 1999. Habitat and species conservation measures allowed the species to rebound, but their range has been significantly reduced. Fur farmers weren’t very successful with breeding due to the long reproduction cycle and, when prices fell in the late 1940s, most farming ended. 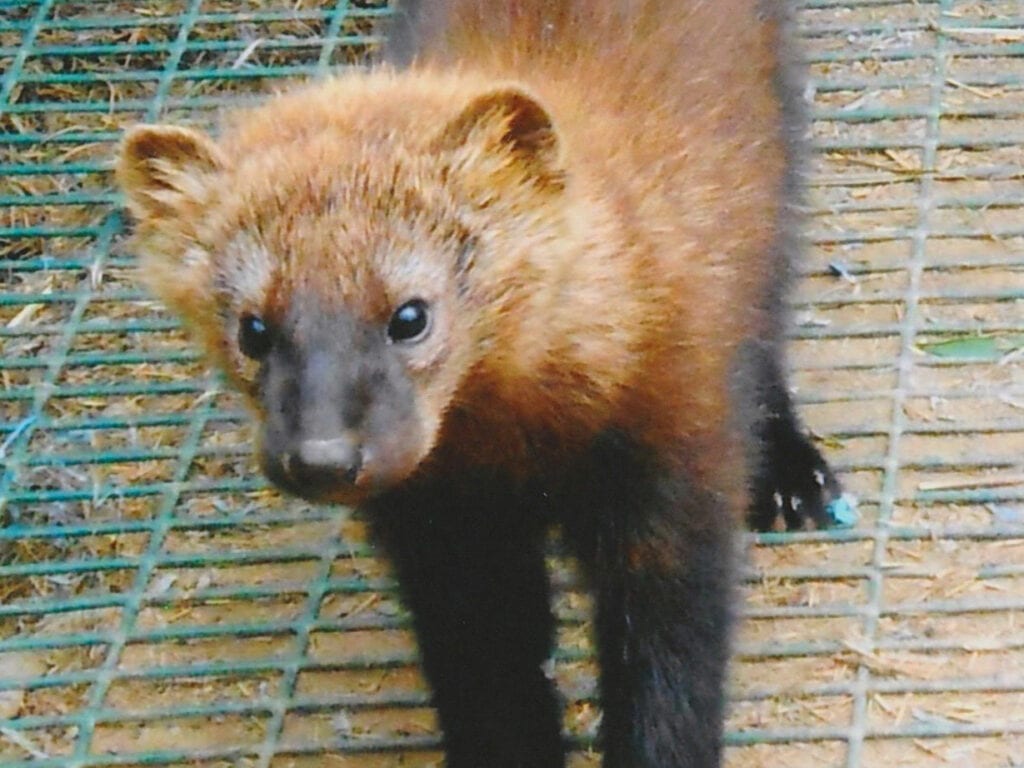 Sadly, the young fisher in Don’s care didn’t survive. He stopped eating, likely due to blockage caused by chewing on the towel kept in the carrier as bedding. After conferring with the vet, Don administered a mineral gel used to eliminate cat hairballs, but the fisher passed only liquids. X-rays didn’t reveal any towel material, so surgery was performed. Unfortunately, strands of thread from the towel had worked their way throughout the fisher’s liver to the point it “looked like Swiss cheese.” Infection had begun and the humane decision was made to euthanize him in early August. Another example of how best efforts can sometimes be to no avail. Donald Cote operates the Duck Pond Wildlife Care Center on Rte. 3 in Vassalboro. It is a nonprofit federal and state permitted rehab facility which is supported by his own resources and outside donations. Mailing address: 1787 North Belfast Ave., Vassalboro, ME 04989 TEL: (207) 445-4326 EMAIL: thewildlifecarecenter@gmail.com