I stopped in to see Don at the Duck Pond Wildlife Rehab Center today and was surprised to find only one critter in the house: a young gray squirrel, which likely had been injured by a cat. It was able to move and used its front paws for eating from the food dish, so Don doesn’t think there’s been a spinal injury, but he’ll keep it for a day or two for observation and assessment before transfer to a rehabber in Bowdoin, who has more volunteers to help with wildlife care.

All releasable critters are gone from Duck Pond, with only nine foxes (one gray, eight red), four raccoons, ten deer, the gray squirrel mentioned above, and Don’s own geese and ducks on site for over-wintering. He usually gets opossums in the fall, which will be kept in the house or basement until warm weather returns next spring. There will likely be a few injured animals admitted during the upcoming months, but most will be transferred as Don is trying to cut back on winter patient maintenance. Although he has two part-time volunteers to help with feeding critters and cleaning cages, Don recently celebrated his 84th birthday and admits he’s slowing down a bit! 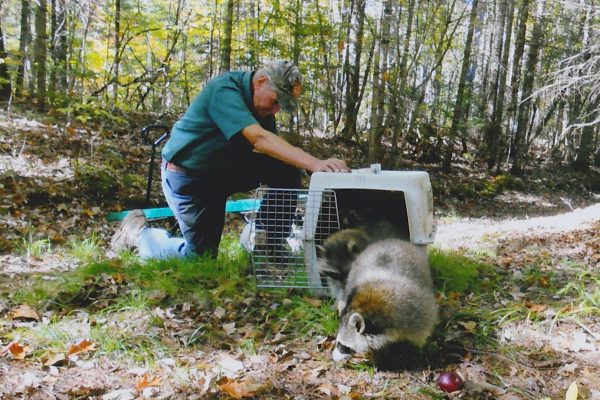 Now the preparations for fall begin, a little earlier this year while the nice weather holds. Don usually gets 50 bales of second crop cutting, i.e., green grass with clover, for feeding the deer that can’t be released until spring. He told me deer don’t typically eat hay, they eat what they like from the bales, then use the rest for bedding. He will use grain and corn as a winter supplement, which is kept in the “doe house.” Before the snow flies, the deer will be moved to their winter pen. This requires extra hands to set up barriers and walk them from one area to another, carefully and calmly, to avoid spooking them, which could result in their jumping over the barrier.

The pens that previously housed the three bobcat kittens need to be cleared of tall grass so that the remaining foxes can be relocated from their smaller cages. In addition, any torn tarps on the raccoon cages must be replaced and secured, fencing repaired if necessary, and any other type of winterization completed. All the dishes, cages, empty pens, and dog houses that have been used to shelter animals need to be cleaned or power washed, repaired, and painted for winter storage. The mobile pens are moved to one central area where they will be securely covered with tarps to protect them from snow and ice.

Not only the grounds need to be readied for cold weather. A couple of tires on the small trailer used for hauling brush and cases of food were recently replaced. The snow plow will need to be attached to the truck. Shovels and ice chippers will come out of storage and sand for icy paths purchased. Think about all you do to get your family’s home ready for a Maine winter and multiply it to meet the needs of various species of wildlife spending the next seven or eight months with you! I’m tired just thinking about it…

Don continues to limit admissions and long-term residents by transferring many rescued critters to other rehabbers who have graciously provided assistance in their care. Please check these websites to see if there is a rehabber closer to you to help keep critter care at Duck Pond more manageable: www.mainevetmed.org/wildlife-rehabilitation or www.maine.gov/ifw/fish-wildlife/wildlife/living-with-wildlife/orphaned-injured-wildlife/index.html – Donald Cote operates Duck Pond Wildlife Care Center on Rte. 3 in Vassalboro. It is a nonprofit, State-permitted rehab facility supported by his own resources and outside donations. Mailing address: 1787 North Belfast Avenue, Vassalboro ME 04989 Phone: (207) 445-4326. Please note that the prior wildlifecarecenter email address is not being monitored at this time.