Does This Maine Wildlife Need To Be Rescued?

We all know that April showers bring May flowers, but for wildlife rehabbers, April also brings desperate calls from well-meaning citizens who are concerned about young animals that appear to be alone. I’m sharing another post written by Carleen Cote regarding the issue of whether to rescue or not:

“With the return of warmer, sunny days, our feathered friends are returning from their southern hiatus and the native wildlife are beginning to move around. This is an appropriate time for a reminder about whether or not young wildlife that appears to need rescuing really do need human intervention.

White-tail fawns probably are being rescued when they should have been left where they were found. A very young fawn will not move until given a signal from its mother. The doe does not remain with her fawn at all times; she leaves to feed herself and may not return to the fawn for several hours. A young fawn also has no odor, so if it is found by a dog, coyote or other potential predator, it’s only by accident, not from a scent. 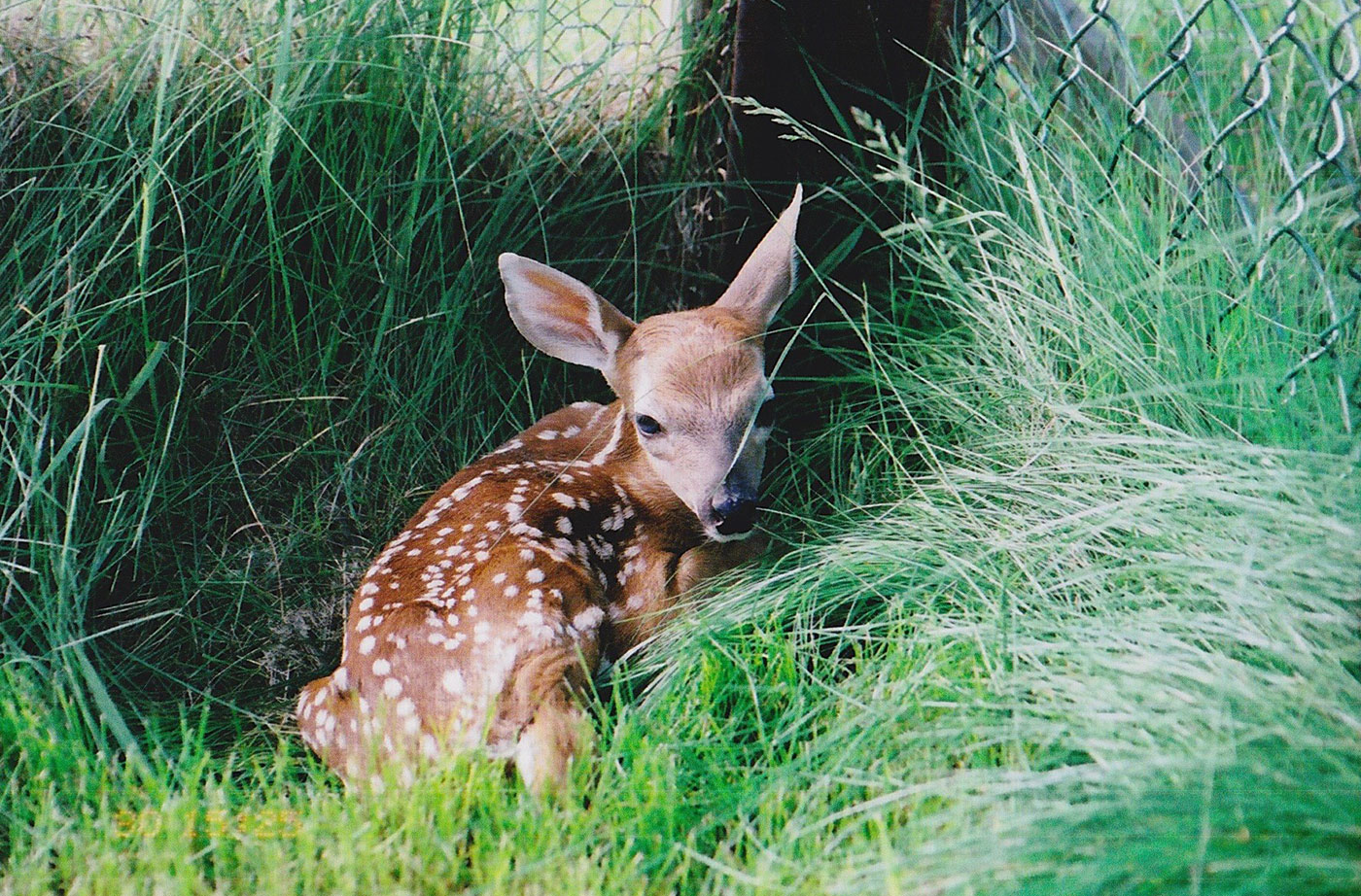 If, when out walking in the fields and woods, you should spot a fawn, do not immediately assume that it needs to be rescued. Mark the spot where the fawn was spotted and leave. Return after a few hours or the next day. If the fawn is in the exact same spot, then it is probably safe to assume that something has happened to the doe. Contact a game warden and follow the advice given.

If you find a young bird on the ground and no nest can be found, make a substitute nest from a berry box or basket; be sure there are holes for drainage and hang it in a tree close to the spot where the bird was found. The adults will respond to the feeding calls of their youngsters.

If cats are prowling or stalking any birds, especially when there may be young birds in a nest that cannot survive without being fed, the cat should be confined rather than removing the birds. Fledglings—young birds that are feathered and out of the nest—need time to master the art of flying. Though they may spend time on the ground, this is not necessarily an indication they need human intervention. Observe whether there are adult birds flying around as they could be the parents, either bringing food to the young or coaxing them to take their first flight.

There are times when rescue is necessary such as when an adult female has died, but her young survive, or when young animals have been observed for some time, but no adult arrives to care for them and lead them to safety. If you do rescue wildlife, as cute as they may seem, bring them to someone who has the necessary permits and knowledge to give them a greater chance of survival. If you are in doubt about the need to rescue any bird or animal, or have any questions about the little critters we all enjoy and for which we are concerned, please call. We’re happy to answer any questions or advise you as to where you might get an answer.” –  Donald Cote operates the Duck Pond Wildlife Care Center on Route 3 in Vassalboro. It is a nonprofit federal and state permitted rehab facility that is supported by his own resources and outside donations. Mailing address: 1787 North Belfast Ave., Vassalboro ME 04989 Phone: (207) 445-4326. email: thewildlifecarecenter@gmail.com