Due to unexpected circumstances, I’m not able to prepare a new column for September. I feel it is appropriate, however, to submit an article written by the late Carleen Cote, which was published in September 2005 and is as applicable today as it was 15 years ago:

Ah, sweet September! This is the month for releasing the young critters we have cared for since spring. Some will remain at the center until next May – the younger fawns and raccoons. The months have passed quickly; it seems as though we have just received the first baby raccoons of the season.

The formulas are no longer mixed, the bedding boxes have gone to the dump, and the clothesline remains empty of laundered bedding for days. The raccoons have been in their outside pens since July. Instead of washing bedding towels, I spend my afternoons cleaning pens and picking up poop. The raccoons are becoming restless; some are taking advantage of an unlocked gate to run out onto the lawn or to climb a tree.

They are ready to start exploring and begin life on their own. A raccoon that remains with its mother in the wild will probably spend the winter denned up with her. Will the ones we release disperse or spend the winter together? We don’t know. Only four to five raccoons are released at each site, always with the ones they bunked with in our pens. 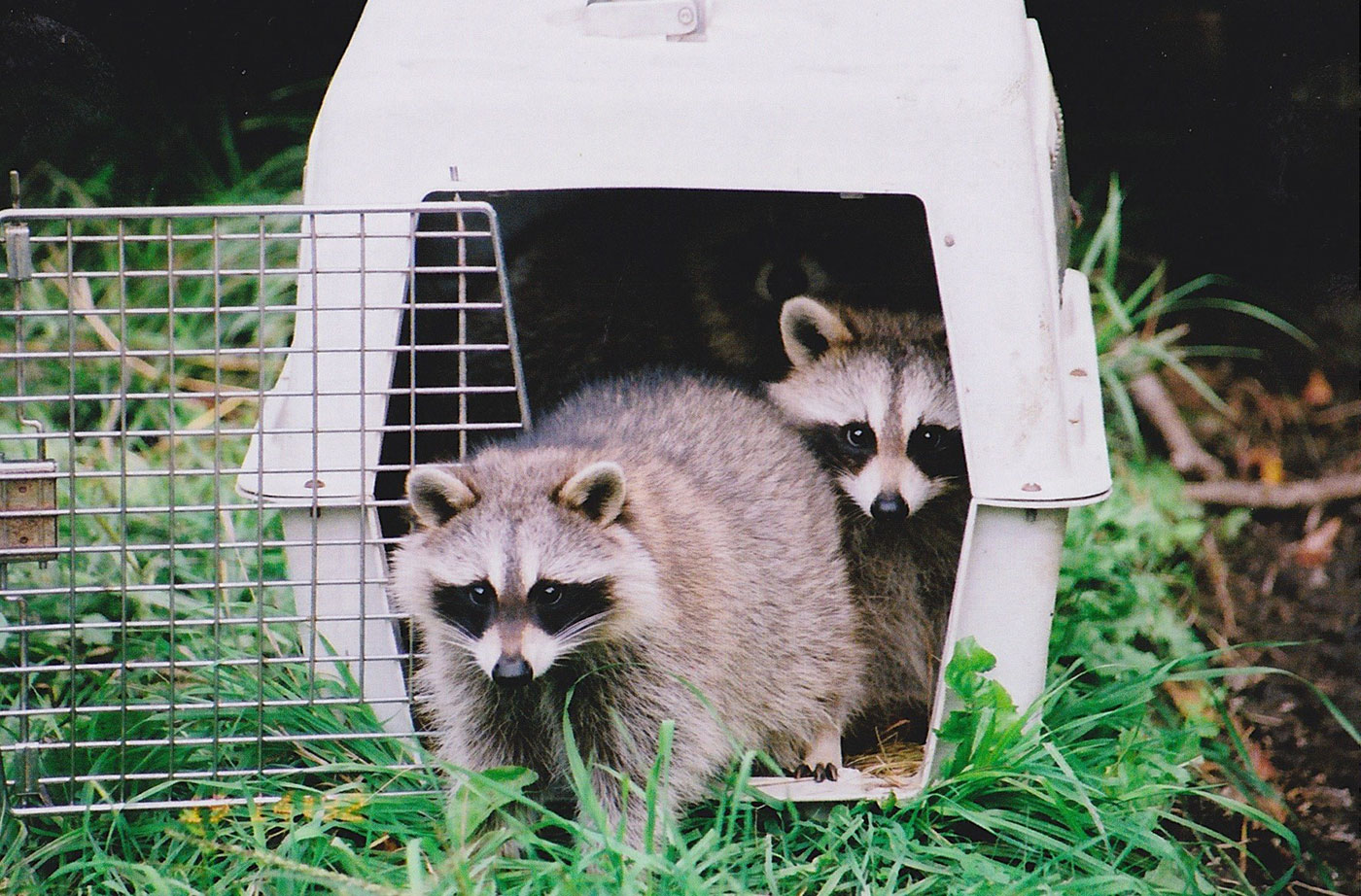 Raccoons being released back into wild. Photo courtesy of Donald Cote

Our gratitude can’t be expressed enough to the landowners who have allowed us to enter their properties to release critters. To protect their privacy and the animals, we do not reveal where any of the critters are released. Without the landowners’ generosity, finding appropriate sites would be difficult, maybe impossible.

For the mink and skunks who are usually released in August, we always find a source of water: marsh, beaver bog, or stream. The mink scurry into the water, diving and splashing, swimming away with nary a look back. The skunks immediately start grubbing, looking for their natural food of slugs and insects.

Now we have the raccoons. The release sites we have selected are deep in the woods, away from people. We never know how close we will be able to drive into the site; in many places, a trek by foot is needed to arrive at a source of water. So, a wheelbarrow is tied onto the cap of the truck to use for transporting the raccoons, safe in a dog kennel, through the woods. We learned early on that carrying a kennel with four or five raccoons weighing 10-15 pounds each was a task we didn’t want to repeat! The trek could be through water, brush piles, and over fallen trees – quite an obstacle course. The beauty and serenity of being alone in the woods, listening to the singing birds and rushing waters from a nearby brook is spoiled only by the buzzing, biting mosquitoes and deer flies. We soon reach our destination and prepare to say farewell to the raccoons we have cared for over the last five months. The raccoons continuously emerge from the kennel. Some stop to look around, others dive into the water or start climbing a tree. We leave three to four days’ supply of food and say, “Good-bye and good luck!” This scenario is carried out until we have said goodbye to all the raccoons that were big enough for release.

As happens every year when we have made the trek into the forest to release the last of the raccoons, I say to my husband, Donald, “Do you know what I’m thinking?”

He says, “Yeah! What will we get next year?”