As a follow-up to the September column, I’m submitting another written by the late Carleen Cote, published in the fall of 1999. As we prepare for colder weather, it seems like a good time to share some of her fond memories.

“Over the years, hundreds of raccoons have called our Center ‘home.’ When they start arriving in mid-April, our leisure time comes to an end for at least six months. From 6:00 a.m. to midnight, the hours are spent mixing formulas, feeding, keeping bedding clean, and doing six to seven loads of laundry a day. Probably the most frustrating part of caring for the young raccoons is weaning them. Raccoons love to suckle and reluctantly give up their bottle. The milk is eventually replaced with a mixture of dog food, rice, and boiled eggs blended into a consistency thin enough to be fed from a bottle. As they become older, this mixture is made thicker and attempts are made to encourage them to eat from a dish.

As the weather gets warmer, the raccoons are moved to outside pens. They are taken on walks so they can start exploring the feel of the ground and grass and do some climbing on fences and trees. Their diet will then include dry puppy food, bread, eggs, and fruit. The daily routine then becomes keeping these outside pens clean; the feedings are reduced to twice a day.

There are lasting memories of some of the raccoons. The raccoon we called ‘Fatso’ for instance, that adopted a young fawn as his playmate. Fatso refused to be displaced from the deer house where he had lived alone before the arrival of an injured young deer. The deer and raccoon spent the winter playing together and became fast friends to the point that, when we moved Fatso to an outside pen in preparation for release, he became despondent and refused to eat. He was reunited with his friend until the time of release. 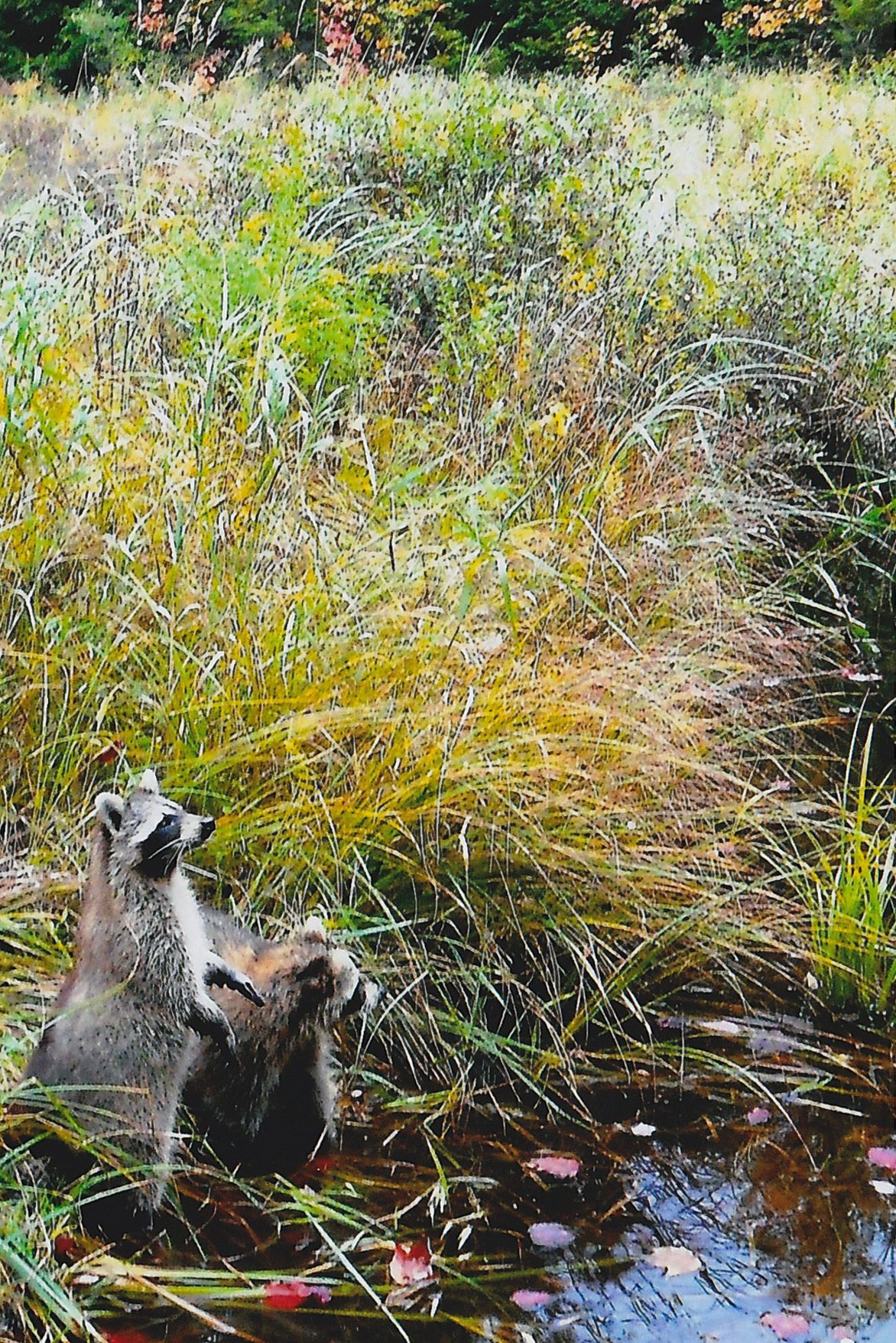 One raccoon is remembered for his coloration. He was a pure platinum color, except for his tail. Another of the raccoons, raised alone in the house, brought concern about what would happen to her when release time came. Would she adjust to being in the wild? Not to worry! When she emerged from the dog carrier, I attempted to give her one last stroke on her back. She immediately assumed a defensive posture, refusing to let me touch her, and left with the other raccoons to explore their new world.

After our usual summer of long hours and little time for ourselves, the approaching fall finds us planning the release of raccoons back to the wild. This is when we experience the beauty and quiet of nature away from the noise and other disturbances we experience in our lives. To walk in the forests, hearing the chirping of crickets, the sound of the water in streams and brooks as it bubbles over rocks, flowing along twists and turns in the past to its next destination – these are welcomed times. Then there are the years when heavy rains occur as we near release time. When this happens, the once gentle flowing waters become rushing waters, restricting vehicle access to our favorite release spots. The muddy roads, streams, and brooks overflowing their banks mean that our trek into the selected sites will have to be done on foot, pushing the wheelbarrow, with the raccoons secure in dog kennels, to their new home out in these beautiful Maine woodlands and forests.

After such treks, we return home, clean and sanitize all the pens and other paraphernalia used in caring for the raccoons, store it for the winter, and wait to see what the next spring will bring.”