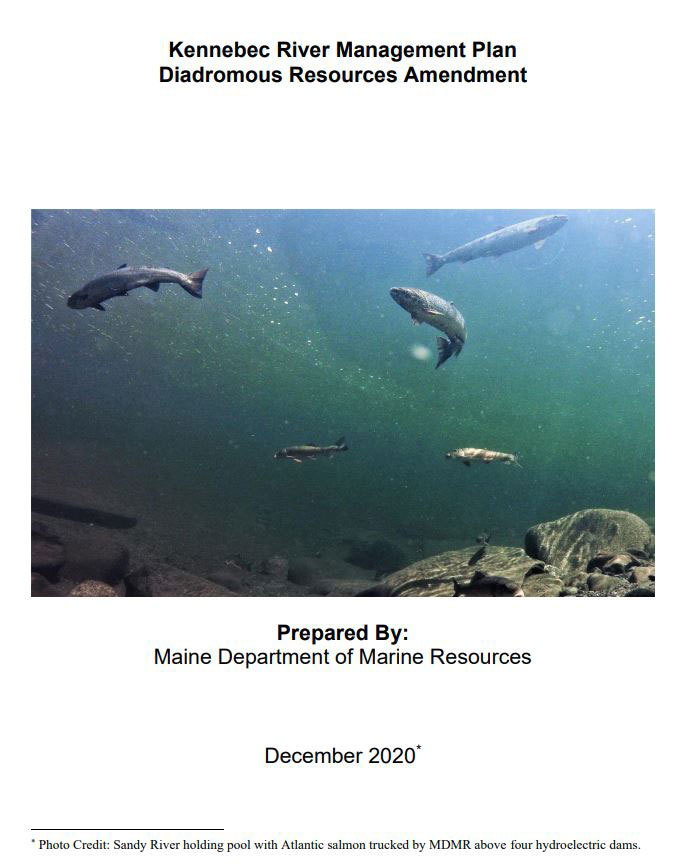 We pulled out several excerpts from DMR’s update of the Kennebec Management Plan that are particularly powerful:

“All high-quality spawning habitat for Atlantic salmon lies above 4 dams (Sandy River) or 6 dams (Carrabassett River and mainstem Kennebec River) and restoring runs into the Kennebec River in sufficient numbers is essential to meet recovery goals for the entire species statewide (USFWS and NMFS 2019).” (p.2.)

“In most cases, dam removal is the most effective fish passage strategy and reduces the cumulative impacts of multiple projects.” (p.10)

“Due to large impacts on State resources and relatively small generation, the State believes the best approach to meet our management goals for the Kennebec River is to decommission and remove some or all of the dams in the Lower Kennebec. These four projects impact 5 species of diadromous fish species and prevent ESA listed species from reaching all of their available high-quality habitat. Any potential lost generation at the lower Kennebec projects through a decommissioning and removal could be offset by strategic hydropower enhancements at projects that are not significant fish passage impediments and/or through new clean energy developments (e.g. grid-scale solar).” (p.28)

“The sum of authorized capacity of all four dams in the lower Kennebec River is 6.4% of the total hydropower and accounts for 0.43% of annual electricity generation in Maine.” (p.28)

“The Kennebec River once supported a robust Atlantic salmon population, and habitat in the Kennebec River is critical to the recovery of the species today. In particular, the Sandy River has the greatest biological value for spawning and rearing habitat in the watershed, but it is currently only accessible to adult salmon through a trap and truck program around the four mainstem dams (NMFS 2009). Dams are also the most significant contributing factor to the loss of salmon habitat connectivity within the range of the DPS (Fay et al. 2006) and have been identified as the greatest impediment to self-sustaining Atlantic salmon populations in Maine (NRC 2004). In the Kennebec River, there are approximately 251,083 units of historically accessible spawning and rearing habitat for Atlantic salmon, however hydropower dams reduce or impede access to roughly 222,105 units (88.5%) of that habitat (NMFS 2009). Put into perspective, this is a loss of 30% of the historic habitat of Atlantic salmon within the state of Maine; the only remaining intact population of Atlantic salmon in the United States.” (p.29)

“The four mainstem dams on the Lower Kennebec constitute the single largest impact on historical habitat in the Kennebec River. Lockwood, Hydro-Kennebec, Shawmut, and Weston and their associated impoundments impact both principle constituent elements defined in the Endangered Species Act listing of the species: migratory corridors and spawning and rearing habitat.” (p.30).

“Removal of dams on the Kennebec would eliminate direct project impacts and reduce cumulative impacts on indigenous diadromous species in the Kennebec River. These impacts include mortality and injury of adults and juveniles, migratory delays, reduced river productivity, thermal alteration, water quality impairment, predation due to impoundments, reductions in nutrient and energy exchange between freshwater and marine ecosystems, alteration of the natural hydrologic regime, and restriction to sediment and organic material transfer. MDMR is not aware of any examples on the east coast of self-sustaining populations of Atlantic salmon, American shad, blueback herring, alewife, sea lamprey, and American eel above four hydropower dams. MDMR’s analysis has shown that self-sustaining populations of diadromous fish, especially the endangered Atlantic salmon, are possible in the Kennebec River, now or in the future, only if very high-performance standards for fish passage are consistently achieved at each of the mainstem project dams. MDMR’s review of effectiveness studies conducted in Maine demonstrates that our recommended performance standards are not achievable based on current proposed fishways by the Licensee.” (p.35)

Banner photo: Sunset over the Kennebec River in Waterville, by David Preston