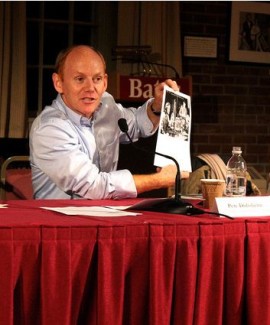 NRCM Senior Director of Advocacy Pete Didisheim holding a photo of Bates Professor Walter Lawrence, with students, studying water pollution samples from the Androscoggin, which was one of the most polluted rivers in the entire nation before the Clean Water Act was enacted. Photo Credit: Bates College Harward Center for Community Partnerships.

Forty years ago today, the U.S. Congress passed the Clean Water Act into law, and they did so in a remarkable fashion. In a powerful statement of bipartisan support for the environment, both the House and the Senate on October 18, 1972, voted to override President Nixon’s veto of this landmark bill. And it never would have happened if not for Maine Senator Ed Muskie, who we all recognize as the father of the Clean Water Act.

But Maine had many other heroes who also helped build the technical, political, and public support that was needed to propel the Clean Water Act into law. I recently had the pleasure of speaking on a panel at Bates College on the topic of the Clean Water Act, and it provided me with an opportunity to focus on four individuals who helped create the context within which the Clean Water Act was made possible.

Here are my remarks, which describe the pivotal roles played in the Clean Water Act saga by a politician (Senator Muskie), a scientist (Bates chemistry professor Walter Lawrence), a journalist (John Cole), and a citizen activist (NRCM Board president at the time, Bill Townsend).

The Natural Resources Council of Maine was actively pushing for federal clean water legislation throughout the 1960s. Today our rivers are much cleaner because of the tremendous work of those who helped bring this law into place, and implement it over the years.  Although the job is far from being finished, Maine’s rivers and the people of Maine have much to be thankful for as we celebrate the 40th Anniversary of the Clean Water Act.