Marking the 50th Anniversary of the Clean Water Act

Remarks by Pete Didisheim, NRCM Interim CEO, at a Clean Water Act event on September 29th in Lewiston, Maine, along the banks of the Androscoggin River

Greetings and welcome to this celebration of the 50th anniversary of the Clean Water Act. We are now at the part of the program when we’ll recognize 100 Clean Water Champions.

Initially, we planned on identifying 50 Champions for the 50 Years of the Clean Water Act. But that proved impossible. We had way too many nominees to stop at 50. Even narrowing the list down to 100 was difficult.

You’ll be pleased to know that I won’t be reading the names and bios of the 100 Champions or listing all they’ve done to protect the waters of Maine. That would take days.

Clean Water Champions who attended this event in Lewiston on September 29, 2022

And I won’t be inviting them to the stage for a handshake and to recognize them with a certificate – but they will be receiving a beautiful certificate in the mail next week with original artwork by Jon Luoma.

Instead, let me share a few of my own thoughts about the monumental significance of the Clean Water Act. Then we’ll have a moment for wild applause for our champions – those who are with us today, those who could not make it, and those who have passed away. 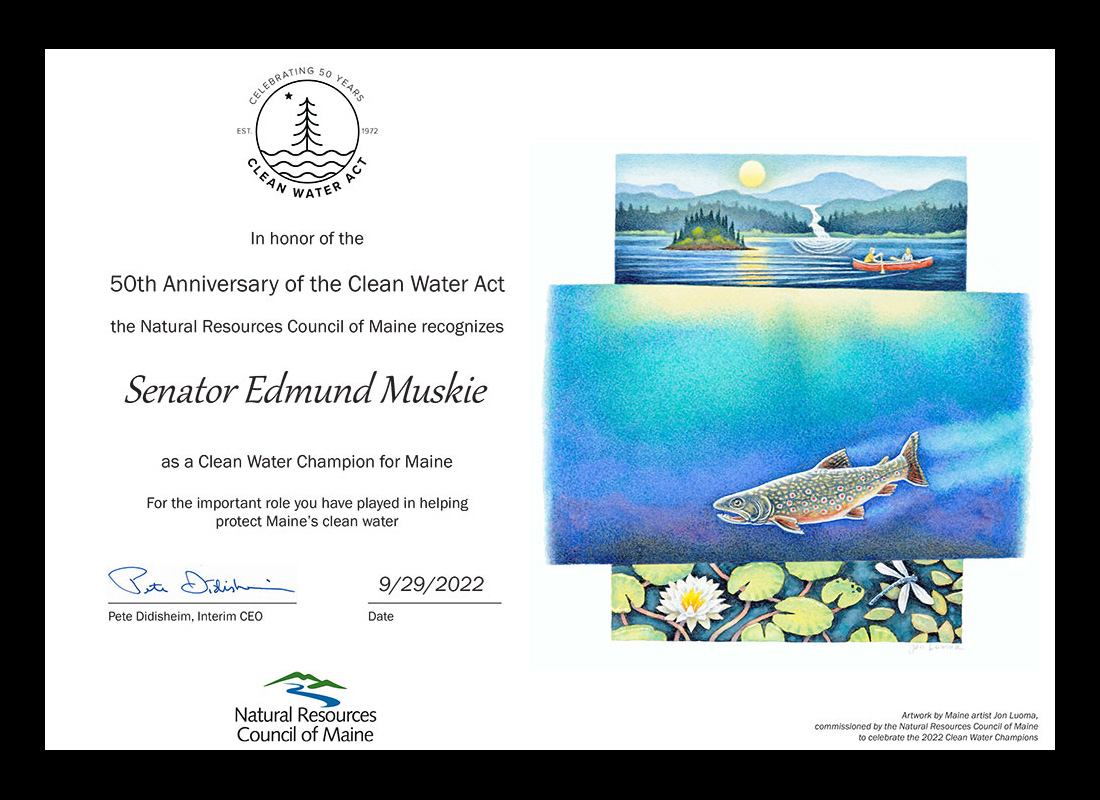 Maine is a water state. Rivers run through us. Our lakes beckon us. Coastal waters mesmerize us. So perhaps it’s not surprising that Maine people gave the Clean Water Act a total embrace – ashamed of what we had done to our waters and determined to make amends.

We’ve heard some great stories today about the Androscoggin, once considered a “reeking mess of filth and debris.”

But look at it now. Alive, restored, central to the life of Lewiston, Auburn, and those who live and recreate along this once-fouled river that motivated Senator Muskie to action.

And we’ve achieved progress in so many other areas – with the help of our 100 Clean Water Champions, and the work of countless others.

Last summer, Steve Tatko, the Land Manager for Appalachian Mountain Club, told me that Atlantic salmon are now making it to the lower falls of Gulf Hagas, 150 miles from the ocean. That’s as far inland as salmon were able to reach when the last glaciers were receding. 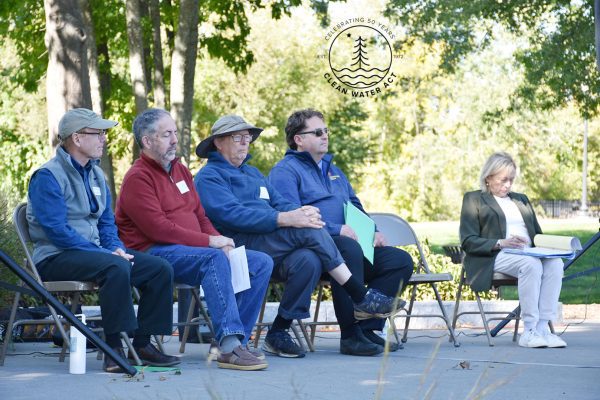 The Kennebec, below Waterville, has exploded to life.

People now gather in Augusta and Hallowell to watch four- and five-foot sturgeon leaping into the air. Forty-three million alewives have passed through the Benton Falls fish lift on the Sebasticook since 2008, because of the removal of the Edwards and Fort Halifax Dams.

And alewives are reaching China Lake for the first time since 1783.

In the 1960s, Maine had the last remaining nesting Bald Eagles in New England. There were less than 20 pairs. Today we have more than 700. The ban on DDT was critical to this success story, but Bald Eagles also need to eat – and now they can gorge along rivers teeming with alewives. 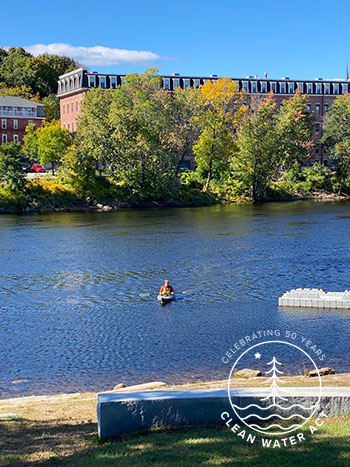 Towns and businesses that turned their backs to the filthy rivers of the past now showcase their riverfront locations – here in Lewiston and Auburn, and also in Bangor, Augusta, Brunswick, Westbrook, Saco, and so many other towns that settled along Maine rivers.

Land near the river that once was the least desirable and almost intolerable place to live, now hosts riverside parks, trails, restaurants, and homes.

This summer, Augusta hosted an Ironman triathlon with its swimming leg in the Kennebec. Competitors splashed through waters where no fish could survive in the 1960s. Who would have thought this was possible 50 years ago?

And our coastal waters. Over the past 35 years, we’ve cut untreated wastewater discharges by 97 percent. This has been enormously important for protecting clam flats and beaches.

And I can’t forget our spectacular lakes — some of the cleanest in New England. Maine has perhaps the best citizen lake science program in the nation, with 1,200 certified Lake Stewards who have gathered data on more than 1,000 lakes.

Some of these stewards have been collecting data for 40 years on the lakes that have been among their dearest companions. That’s what our waters are to us. Companions. The source of memories.

Bill Townsend, who many of you knew, had a lifelong love affair with the Kennebec. In a piece titled “Kennebec Memories” for Maine Audubon’s magazine some years ago, Bill wrote:

“I witnessed the Kennebec nearly die, for men can murder rivers, and there are those who still wish to do so… Yet even when the Kennebec was near death, there were men and women who saw the spark of life still in its waters and who spent long and weary years nursing it back, in legislative halls, in administrative hearings, by writing letters, supporting political candidates, and in a dozen other ways.” 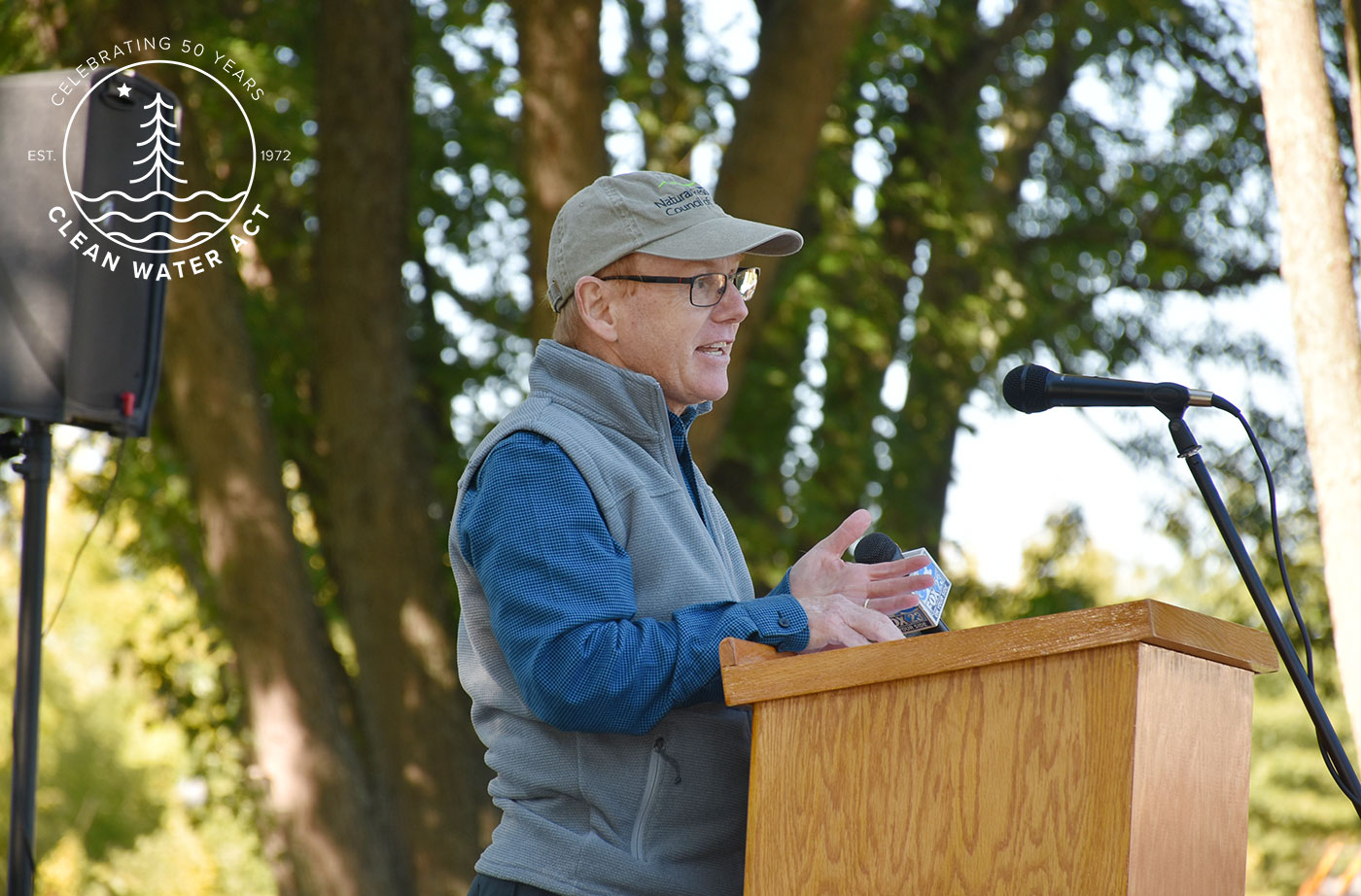 Research shows that humans are hard-wired to love water – we’re drawn to it, it soothes us, it has power over us, and makes us feel connected. Ed Muskie knew this. The insult and injuries to the Androscoggin were deeply offensive to him so he rallied his colleagues and the nation to do something.

And we did. Here in Maine, we’ve done so much. We have more to do, but right now, we have cause to celebrate. Which brings me to our 100 Clean Water Champions.

I would invite the Champions who are with us today wearing blue lanyards to please stand so we can give you our heart-filled appreciation and applause.

These are the volunteers, engineers, scientists, activists, state agency staff, elected officials, members of Maine Tribes, municipal employees, journalists, scientists, nonprofit leaders, and visionaries who have fought for Maine’s waters over the past 50 years. From all of us here today, and future generations, thank you.