“Only the mountain has lived long enough to listen objectively to the howl of a wolf.” — Aldo Leopold

Last week I had the pleasure of participating in a group presentation and discussion on Nurturing Carnivore Coexistence and Biodiversity on Your Farm, at the Maine Agricultural Trades Show. I was invited to participate by Geri Vistein, a biologist who teaches farmers and others how to coexist with coyotes and other carnivores, and by Abby Sadauckas of Apple Creek Farm (who co-manages a progressive and successfully coexisting organic farm). Maine District forester Morten Moesswilde was also on the panel to shed light on the forest angle (over 60% of farmland in Maine is forested). In my portion, I covered the topics of biodiversity, landscape ecology, and wildlife habitat.

When I sat down to write my presentation, I immediately thought of Aldo Leopold. He is the revered father of wildlife ecology. His iconic book, A Sand County Almanac, was the first book I was required to read at college, and has had a deeply lasting influence on my life’s work.

“With more than two million copies sold, it has become one of the most respected books about the environment ever published, and Leopold has come to be regarded by many as the most influential conservation thinker of the 20th century.” – Aldo Leopold Foundation

In one of the essays entitled “Thinking Like a Mountain,” Leopold eloquently describes the sound of wolves howling in the mountains of New Mexico, and he writes:

“Only the mountain has lived long enough to listen objectively to the howl of a wolf.”

Wolves, coyotes, and other apex, or top-level predators, have been persecuted and misunderstood for hundreds of years. Even today, many people have wildly inaccurate fear-based beliefs about these animals. 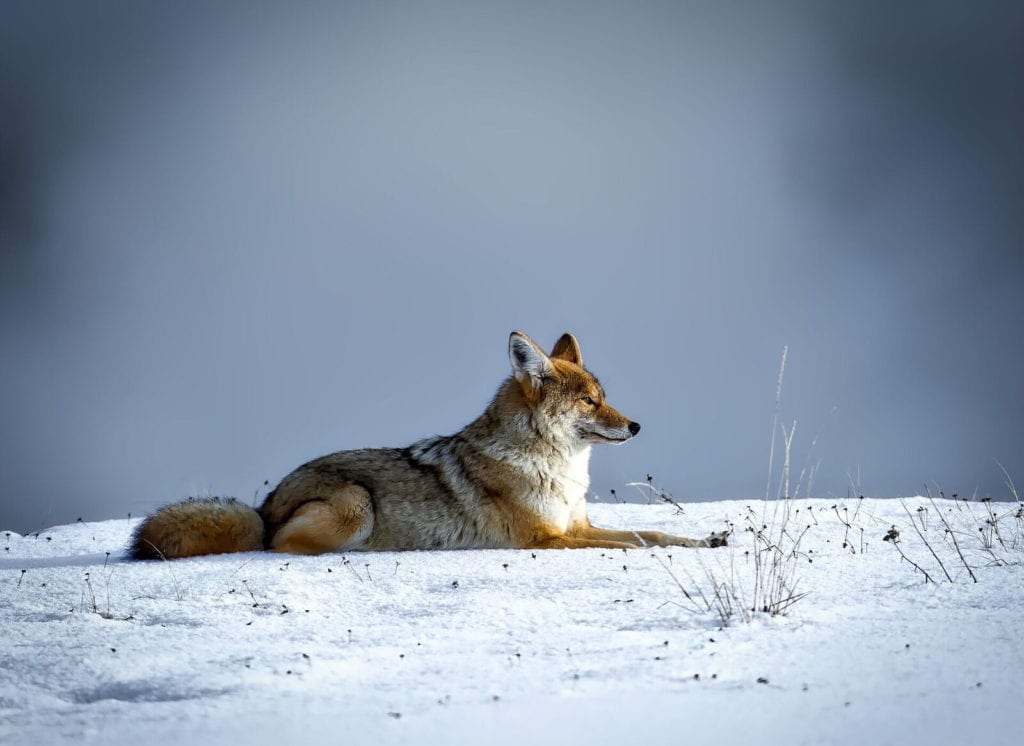 Coyotes are considered a “keystone species” because they have a disproportionately large effect in the natural community, compared to other species.

One commonly held belief is that coyotes and wolves are vicious, blood-thirsty creatures who hunt and kill humans at any opportunity. In fact, wolf attacks on humans are rare, and there has never been a documented case of a coyote attacking a human in Maine. On the whole, they avoid people and are very wary. If you study actual cases where coyotes and wolves did attack humans, the unusual behavior is often triggered by factors such as wildlife feeding, animal starvation, or the presence of a domestic dog (who they perceive as fellow canines either trespassing on their turf or as a threat to their pups).

Leopold’s wise words remind us that so many of our thoughts and actions are biased by belief systems that are not always rooted in reality.

The “mountain” knows that what naturally occurs, belongs.

When we interfere, the consequences are far-reaching and have cascading effects – many of which we are only beginning to understand.

In Maine, our native apex predators were wiped out long ago.

The gray wolf and the eastern cougar were once critically important “keystone” species that kept our ecosystem in balance by controlling both mid-level predators and herbivore populations. We haven’t had wolves in Maine for over 120 years and the mountain lions were wiped out by the late 1930s.

Enter the coyote, a wild canid that was historically absent on the landscape, but moved in from the west to fill the ecological niche of an apex predator, or “top dog.”

Coyotes are considered a “keystone species,” named after the masonry stone at the apex of an arch that supports the entire structure. Keystone species play a critical role in upholding the integrity, productivity, and sustainability of our ecosystems.

Overall, carnivores are critically important to the balance of an ecosystem. They keep prey populations in check, ensuring that rodents, deer, rabbits, and other herbivores don’t overpopulate. When predators are absent or their numbers greatly reduced, herbivores can dominate a natural community, leading to a decline in the abundance and diversity of plants, which means fewer flowers for pollinators (also keystone species), and so on.

This effect has been documented (and debated) in the Greater Yellowstone Ecosystem where wolves were missing from the landscape for nearly 70 years. Decreased predation led to a steady increase in elk numbers. Large herds of elk over-browsed willow (and aspen), which in turn negatively impacted streams and habitat for beavers, birds, and other wildlife. When wolves returned, they reduced the elk herd, allowing the widespread regrowth of willows and aspens.

For this reason, the media and nature documentaries tell a compelling story of how reintroducing wolves restored the ecosystem.

But like most things, the full story is more complicated than the headline.

It turns out that beavers are another important keystone species in the Yellowstone story, because beavers create the sluggish stream conditions that willows need to grow. Read more about that here.

Also, beyond the cascading effects on elk and willow, the removal of wolves also removed an important food source (carcasses) for a wide range of scavenging animals, from ravens to coyotes.

This and many other examples reveal the sheer complexity of ecosystems and remind us to respect the balance of nature.

Our great challenge is to take a step back from the narrow focus of our daily human lives and recognize that in order to sustain our growing human population on this precious planet, we must learn to coexist with the wild world that is the basis for our existence.

If we are to survive as a species, we must learn to “think like a mountain”– with the perspective of an ancient witness, with deep wisdom, and with a total lack of ego.

Stay tuned, I’ll be publishing Part 2 of this article next month, inspired by another famous Leopold quote. The topic will be biodiversity, habitat design, and how important active, adaptive management is in our modern world.

In the meantime, I highly recommend picking up a copy of A Sand County Almanac, if you don’t already have one. The entire Thinking Like a Mountain essay is powerful, especially when he describes seeing a green fire dying in a wolf’s eyes. All the other essays are wonderful too.

Would you like to learn more about coyotes and coexisting skills? You can find a wealth of information on Geri Vistein’s website: Coyote Lives in Maine.

If you would be interested in hosting our group for this talk on Nurturing Carnivore Coexistence and Biodiversity on Your Farm please visit the Talks, Walks, and Workshops page of my website. There you will also find a list of my other talks and offerings related to wildlife, habitat design, and conservation.

Did you know? Coyotes are coming in to breeding season and mate for life. Females will give birth to 5-9 pups. A coyote “pack” is actually a family group of related individuals.

Sometimes protecting the earth can seem overwhelming. But there are things people can do in their own yard to make the world a better place for native wildlife. Several times each month, Deborah Perkins will be sharing her 25 years of knowledge and experience with readers of this blog. The tips she provides here are just a small sampling of what she provides to clients interested in creating habitat for birds, bees, butterflies, and other wildlife. Visit her First Light Wildlife Habitats for more information about how Deb can help you enhance your property for the benefit of native wildlife.

Deborah Perkins, M.S. is a wildlife ecologist with 25 years of experience in her field and a lifelong commitment to wildlife conservation. As sole proprietor of First Light Wildlife Habitats, she has partnered with landowners throughout Maine to create thriving wildlife habitats in their backyards, farms, and forests.