As you now, Maine’s Katahdin Woods and Waters (KWW) National Monument has been in the news again recently. While Interior Secretary Ryan Zinke was doing a tour of the area, we decided to make another visit, on the same day. The birding opportunities in the Monument are so bountiful, but to keep this blog manageable, we’ll focus on a few highlights from the recent visit.

KWW is located just an hour and a half north of Bangor. To get to the lands, we like to take the entrance off the sharp right-angle turn from Route 11 between Sherman and Medway; from there it is only about three miles to the National Monument. (Note: If you are considering visiting, there are lots of lodging opportunities within a half-hour of the Monument including in Millinocket, East Millinocket, Medway, Sherman, and Patten). 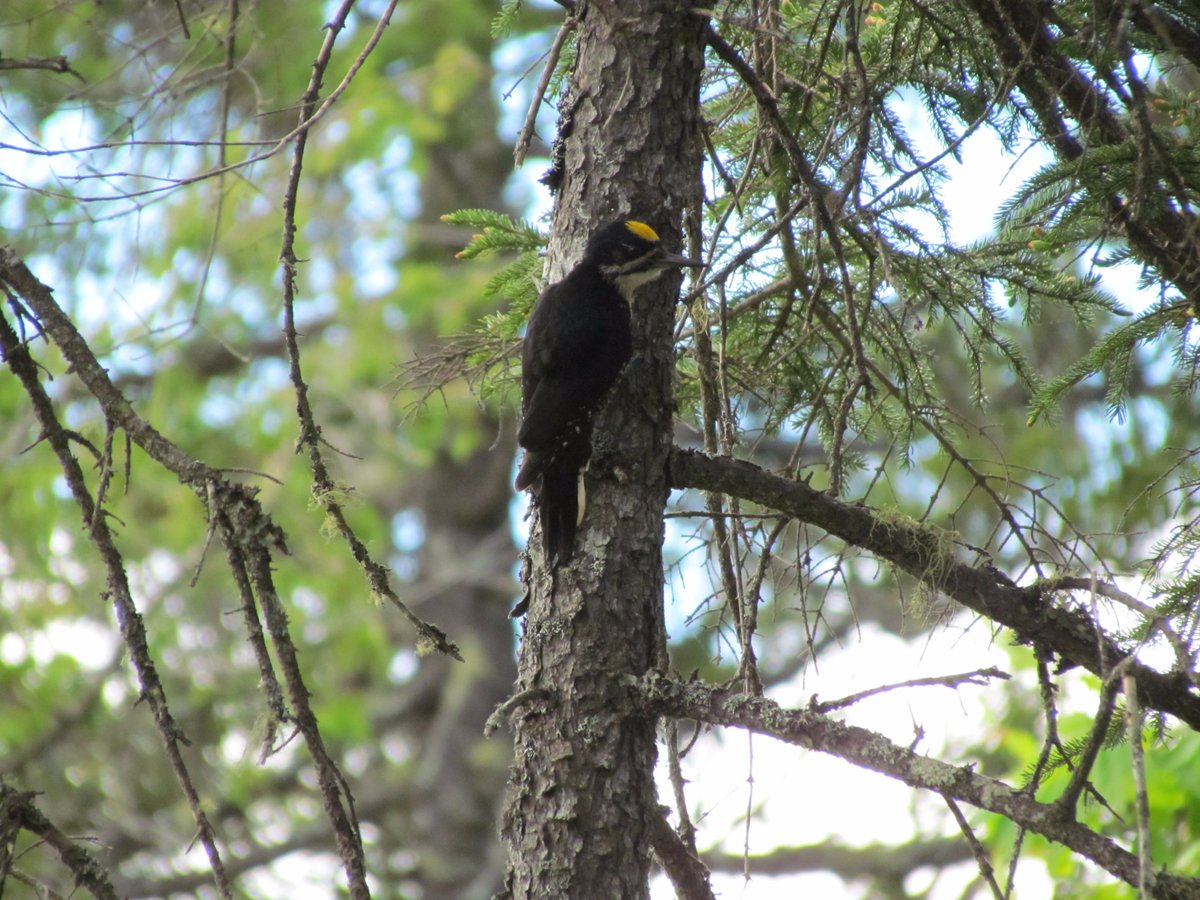 Black-backed Woodpecker, one of Maine’s most highly sought bird species and a resident of KWW. (Jeff Wells)

The Katahdin Woods and Woods National Monument lands support an immense number of birds across a variety of habitats ranging from beech-dominated uplands to mixed forests of balsam fir and birch to stands of spruce and pine; there are also small ponds, streams, the swift rivers, northern wetlands, and more. The first KWW lands that you come to after leaving Route 11 harbor more deciduous forest-specialist species, so an early-morning stop along the entrance road may yield the buzzy “I’m so laz-ee” song of the Black-throated Blue Warbler, the downward spiraling fluty notes of the Veery, the robin-with-a-sore-throat song of the Scarlet Tanager, and the distinctive “pee-a-wee” of the Eastern Wood-pewee. All the while, you’ll hear the constant background sound of the “look-at-me, see-me” of what must be thousands of Red-eyed Vireos that inhabit the KWW lands.

Farther in, you quickly encounter regrowing mixed forests of balsam fir, birch, and other trees. Here you’ll notice lots of Magnolia Warblers, a species that despite its southern-sounding name, is a native of northern forests like those in the Monument. If you are tuned into the emphatic song of the Canada Warbler, you’ll notice more and more of these—a species that has seen a more than 60% range-wide decline but seems to find favorable ground on these lands.

Seven miles in from Route 11 you’ll come to Whetstone Bridge that crosses the East Branch of the Penobscot River. It’s worth stopping here (there are parking areas on either side of the bridge but don’t stop on this one-lane bridge since other vehicles may want to cross) even if just for the magnificent views of the river. Look and listen for birds.

A new favorite birding spot of ours is just two and half miles beyond Whetstone Bridge at the intersection of a road that Google maps calls Stacyville Road. There is a beautiful pond near here; it’s a short walk in, and we have heard mink frogs—which is why we like to call it Mink Frog Pond (it appears not to have a formal name yet). Among the great birds we have seen here are Gray Jay, Yellow-bellied Flycatcher, Palm Warbler, and Blue-headed Vireo.

Just a few tenths of a mile farther down the main road, you’ll come to Sandbank Campsite. From here to the Ridge Trail (a quarter of a mile beyond the campsite on the left) there’s another birding hotspot. Birds like Bay-breasted Warbler, Olive-sided Flycatcher, Black-backed Woodpecker, Boreal Chickadee, Spruce Grouse, and a host of other species have been seen here or along the road that forks to the right between the campsite and the Ridge Trail parking area.

One last favorite birding spot we’ll mention is the area near Lynx Pond, just over two miles in from the entrance for the Katahdin Loop Road (incidentally, this is where Secretary Zinke and his entourage passed Jeff on the day of the visit). The birding can be fabulous here, with species like Black-backed Woodpecker, Yellow-bellied Sapsucker, Yellow-bellied Flycatcher, Ruby-crowned Kinglet, Canada Warbler, Northern Waterthrush, Wilson’s Warbler, Olive-sided Flycatcher, and the Rusty Blackbird—a species of conservation concern that has declined by more than 90% over the last 40 years. 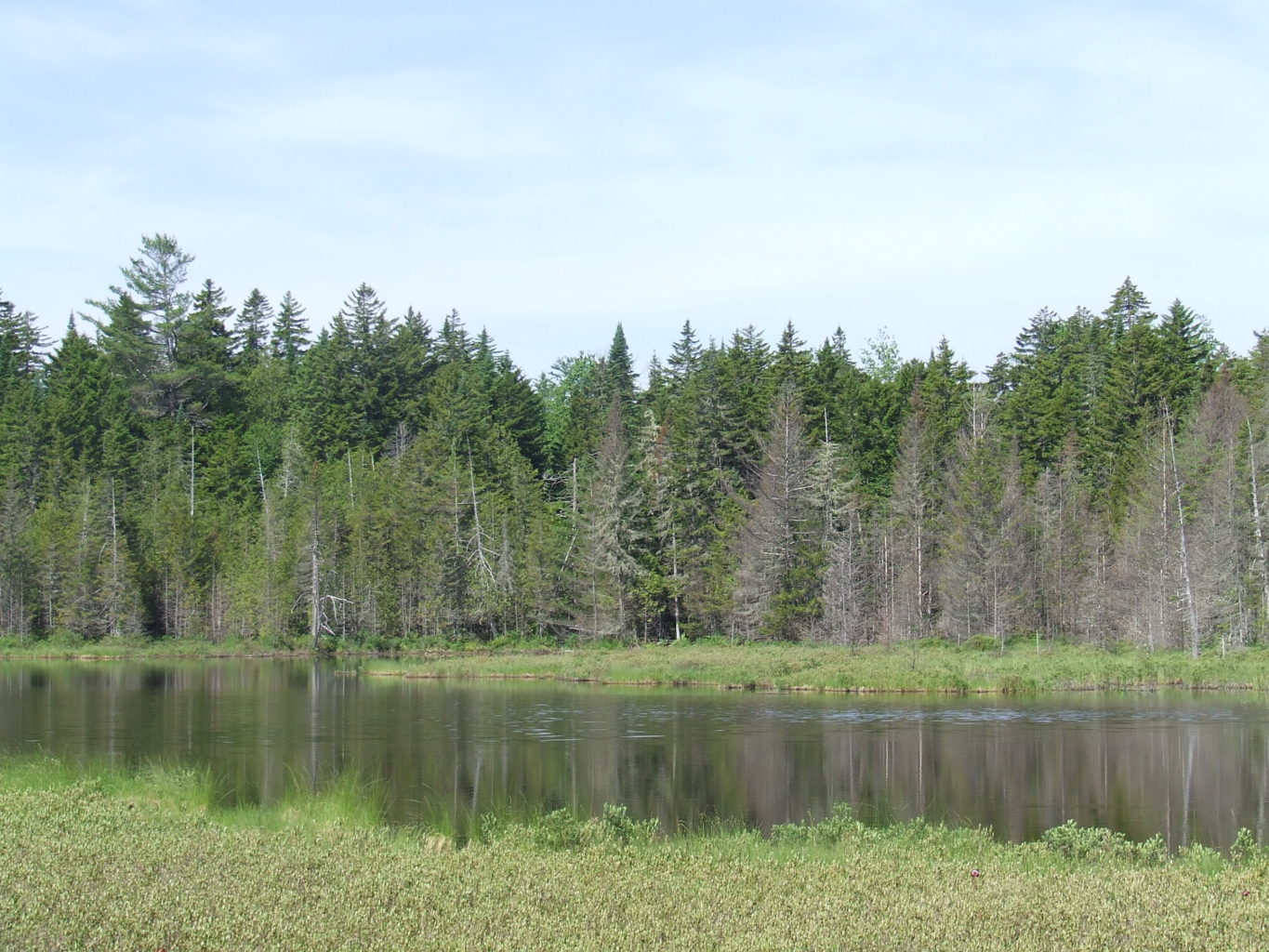 These are just a few of the birding opportunities that are beginning to be explored in Maine’s Katahdin Woods and Waters National Monument. We hope you will join in the fun and visit soon to find some new places and great birds yourself!

(A version of this blog first appeared in Jeff and Allison’s Boothbay Register weekly birding column, “A Bird’s Tail”)