“What’s Up with the Bald Birds?”

The MaineBirds listserv recently received posts from people in Liberty and Camden who have been seeing bald birds around their yards. Such sightings harken us back to our days at the Cornell Lab of Ornithology, where questions about birds with featherless heads ranked high on the list of FAQs from our members and the public. 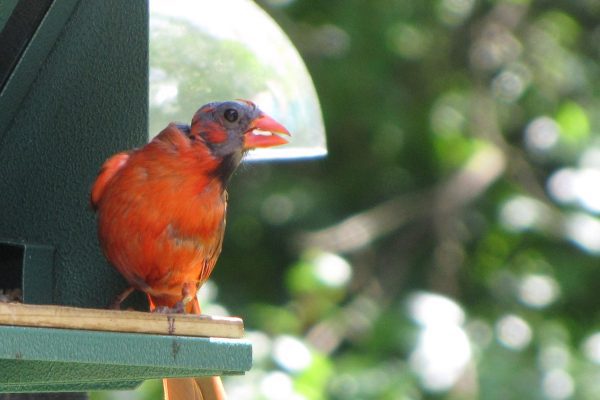 So, what exactly is going on with these bald birds?

Although they may look strange—a little reminiscent of the dinosaurs from which birds descended, perhaps?—baldness in birds is not an infrequent occurrence, particularly in some species. Blue Jays and Northern Cardinals are most likely to, um, “bare” this out. In fact, it was these same two species that were recently reported flaunting their feather-free noggins, according to the MaineBirds report.

Naturally, folks reporting bald birds are typically concerned for them. The two observers who reported their recent sightings to the listserv had done their homework and noted that the condition was very likely the result of molting. Indeed, this is the time of year (late summer and into fall) when most birds molt. Typically, this natural phenomenon is not so dramatic; birds shed old, damaged feathers gradually to make way for new ones (which especially come in handy for the long migration many of them are about to launch into from their breeding grounds to the wintering areas). 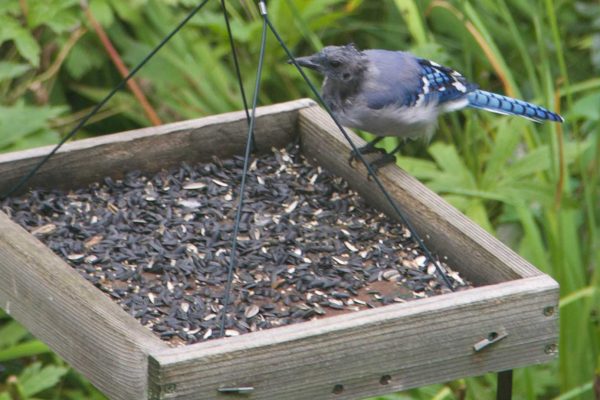 Blue Jays are another species with a high rate of bald-headedness. (Collin Sheehan) Click image to view full size.

Molting is triggered by hormonal changes usually brought on by seasonal ones. It makes sense that these in turn are timed to avoid periods in a bird’s life when energy needs are at a premium, like during breeding. There are lots of interesting variations between bird families and species related to how, when, and where they molt. Most waterfowl species have a period in mid- to late-summer when they molt all of the wing feathers at once and become flightless for up to a month. Many other birds molt only one or two of the very vital wing feathers at a time so that they can still fly. Some birds molt before they migrate south in the fall while others migrate upon arrival on the wintering grounds.

None of that, however, answers the question most obviously at hand: Why do some, like those aforementioned, lose their head feathers all at once? 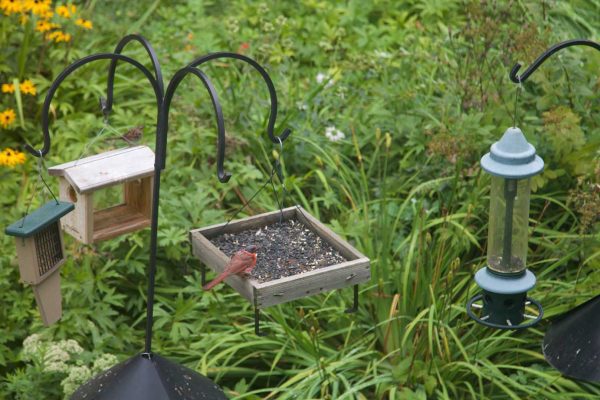 Bald birds, like this Northern Cardinal, typically grown their feathers back within a week or so. (Collin Sheehan) Click image to view full size.

Researchers have yet to provide a definitive answer to that question, but some hypothesize that this sudden glabrous state is tied to nutrition (or lack thereof), environmental factors, parasites such as feather mites, or something completely unknown. Rest assured, the birds are not in pain (even if it pains us to see them this way!), and the feathers will be replaced in a week or so.

While researchers continue to learn ever more about molting—including sudden full-head feather loss in species like Blue Jays and Northern Cardinals—they also provide opportunity for hands-on, or should we say, “eyes-on” learning by the observers themselves. One of the reports to the MaineBirds listserv included this insightful little tidbit: “One of the Blue Jays has shown some growth over the last week, more than the other, anyway. The cardinal…is still very bald. It’s also how I learned that cardinals have black skin.”

A great example of some of the many things birds, er, “reveal” to us!