We woke up this morning to the thin, quivery whistles of the “Old Sam Peabody” song of one of the two White-throated Sparrows that have made it through the entire winter in our yard. The songs were not the strong, perfect version that we all know as a quintessential sound of summer in Maine but the melodic voice sent a clear message that there are two reasons to celebrate today: It’s the First Day of Spring, and, perhaps most importantly to the bird, it’s also World Sparrow Day. 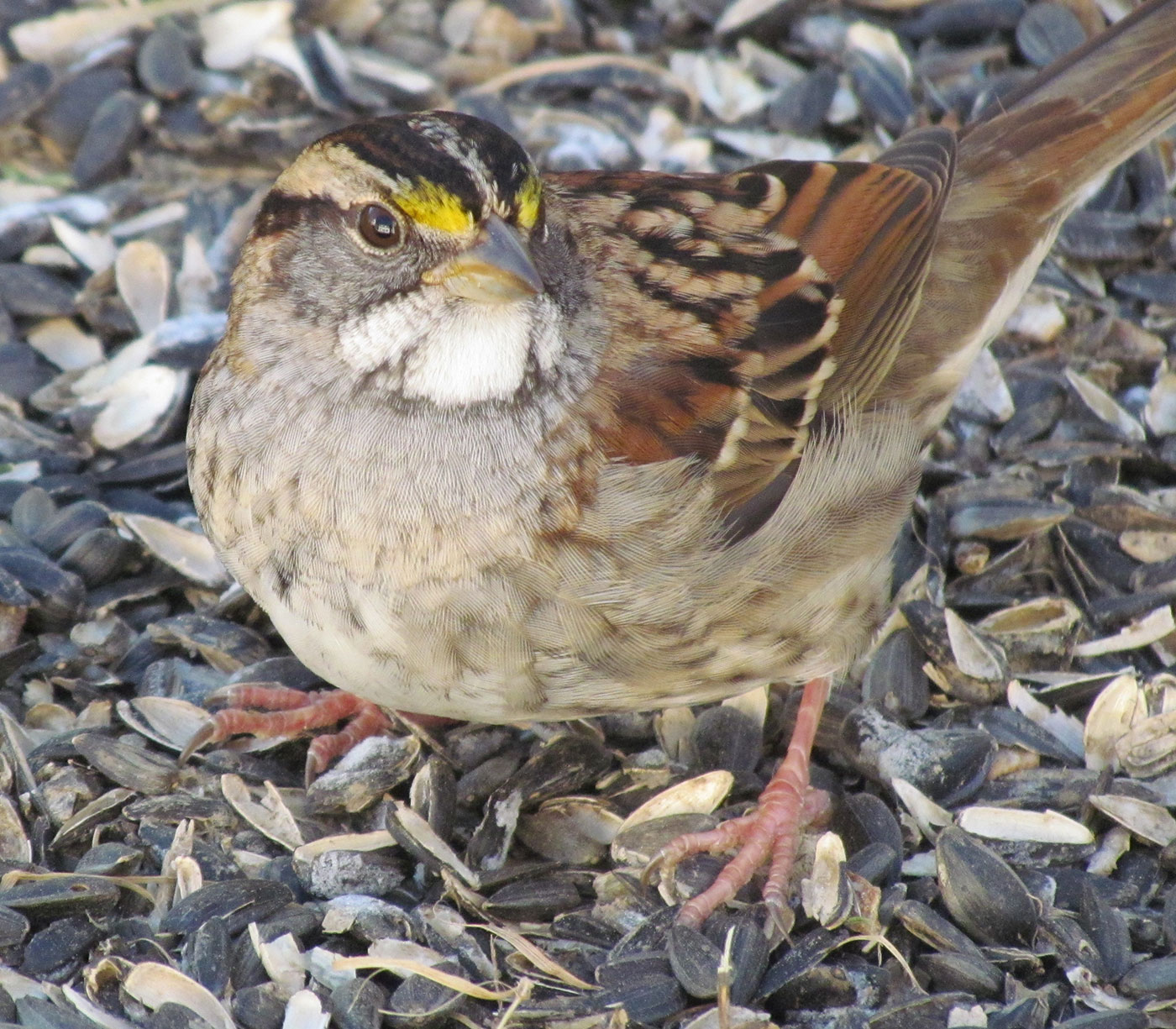 White-throated Sparrows are a familiar breeding bird from Maine west to the Northwest Territories of Canada. Their "Old Sam Peabody-Peabody-Peabody" song is a quintessential sign of spring in Maine. They have experienced a continued steady decline in numbers across their range including here in Maine, which is why NRCM’s land conservation efforts, including in Maine’s North Woods is so important. (Photo courtesy of Jeff Wells)

We all have our reasons for celebrating the arrival of spring, which is tethered to the Spring Equinox. World Sparrow Day is not quite so widely known or celebrated. Unlike many of their showy cousins, the beauty and distinction of sparrows tends to be a bit more subtle—too often, they are all lumped together with the affectionate but understated term, “little brown jobs.”

Although first started in India to focus attention on the House Sparrow, a bird that is an introduced and now widely occurring species year-round here in North America, the purpose of World Sparrow Day has since expanded to try to increase support for and knowledge about familiar birds everywhere.

The term “sparrow,” we should clarify, has been applied to a suite of birds that are not all necessarily related to one another. Species like White-throated Sparrows, Song Sparrows, and Chipping Sparrows are part of a larger family of birds of the Americas that includes birds that are not even called sparrows, like towhees and juncos, and also exotic (to us) species like brushfinches and chlorospingus. The House Sparrow is completely unrelated and is part of a family of Old World species sometimes called the weaver finches. 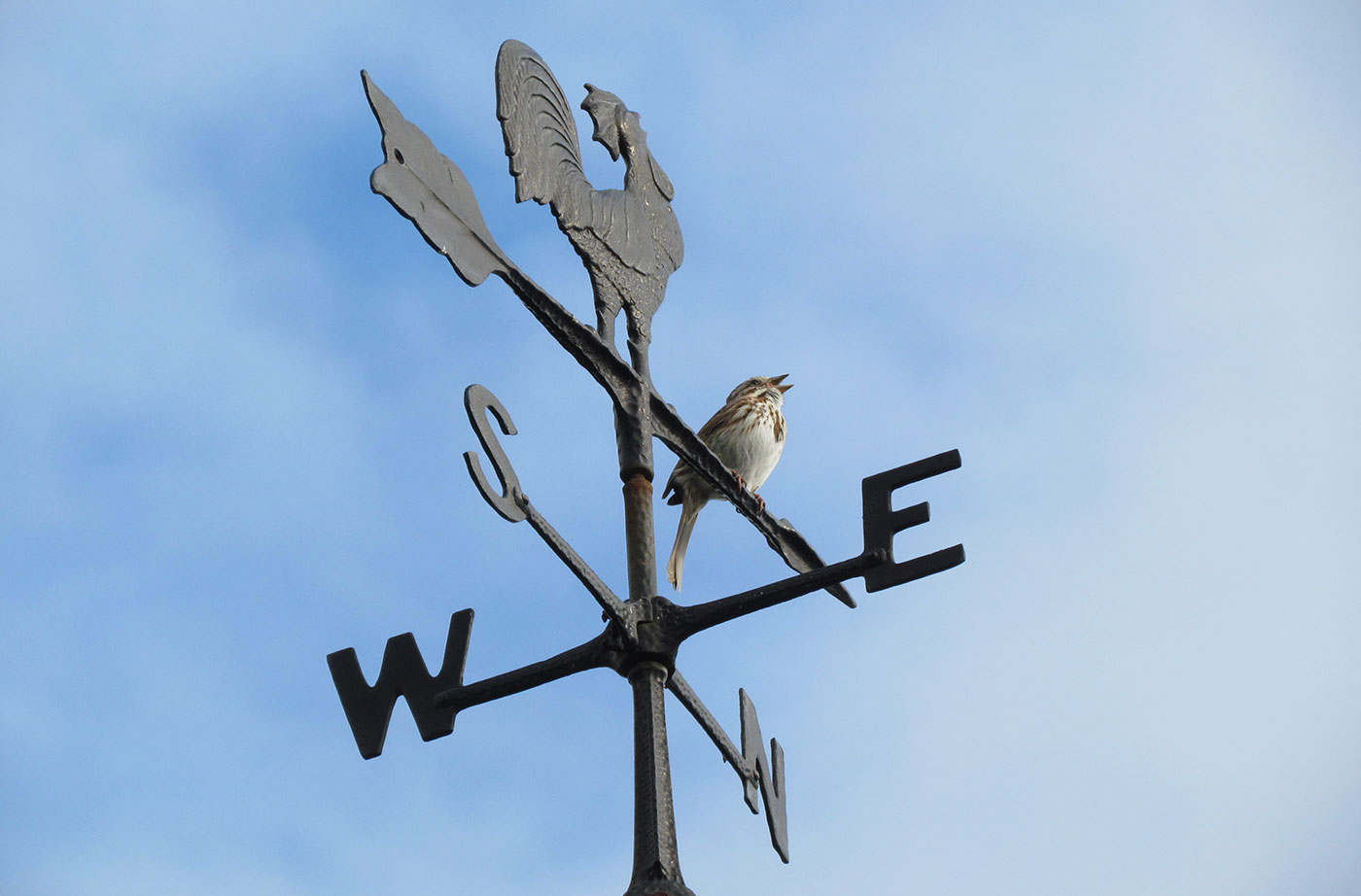 The aptly named Song Sparrow are hearty songsters whose songs are heard frequently in the spring and summer in Maine. Song Sparrows are one of the most widely distributed sparrows in North America, ranging across all but the southeastern U.S. and Midwest and northernmost Canada in summer and throughout virtually the entire U.S. and northern Mexico in winter. Song Sparrows have shown a long-term decline across their range. (Photo courtesy of Allison Wells)

The name “sparrow” has its origins in ancient languages of Europe, where it is thought to have meant something like “small field bird” and/or “small brownish bird of the fields.” It was applied to the small, brownish bird that had adapted itself to living around human habitations—the House Sparrow. When the first European settlers arrived on these shores they saw small, brownish birds that reminded them of their “sparrows” and applied the name. It has stuck ever since.

Across much of the northern U.S. and Canada, sparrows are one of the last to leave in the fall and the first to come back in spring. Most spend the winter wholly or partly within the U.S., sometimes, as we can testify to, as far north as Maine (along with the White-throated Sparrows, we have had several Song Sparrows and four Dark-eyed Juncos all winter coming to our backyard feeders). That means they don’t have as far to travel back north as do some of the warblers and tanagers and flycatchers that migrate south to winter in Central and South America. 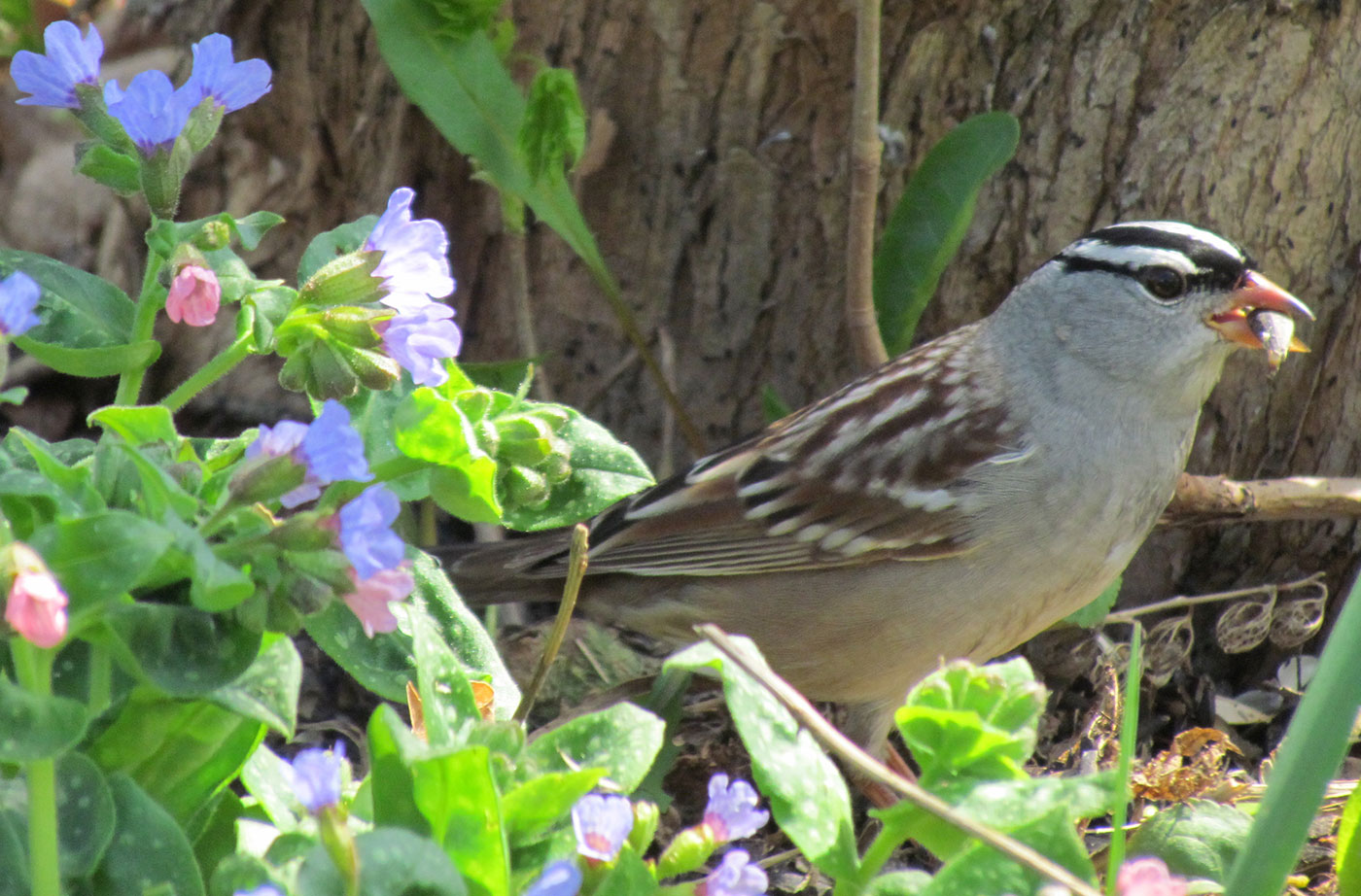 White-crowned Sparrows are a regular spring and fall migrant in Maine on their way to their breeding range which extends across the boreal forest region from Newfoundland west to Alaska. A number of other subspecies also occur south into the Rocky Mountains and coastal mountains south to California and New Mexico. White-crowned Sparrow populations seem to be stable or even increasing. (Photo courtesy of Jeff and Allison Wells)

(Listen to and watch a White-crowned Sparrow singing during migration in Maine.)

Consequently, they usually arrive back earlier in the spring. That in turn means that our neighborhoods, woods, and forests begin to echo with those sweet sparrow songs by the first day of Spring.

The relatively small numbers of sparrows that overwintered here in Maine this year will, day-by-day, be joined by various sparrow species migrating back to and through Maine. People are beginning to report sightings of the big, rusty-colored Fox Sparrows, most of which will probably continue on to breeding locations across the boreal forest regions of Quebec and Labrador. Tiny Chipping Sparrows with their bright reddish caps and unstreaked undersides will be arriving in the coming days and weeks as well—soon you will hear their trilling songs from every yard. White-crowned Sparrows tend to come through a bit later, sometimes in numbers not until early May. Like the Fox Sparrow, they are headed much farther north, to the boreal regions of Canada where their whistled “oh, jam, jam, feed the ants” is a familiar sound in many Indigenous communities. 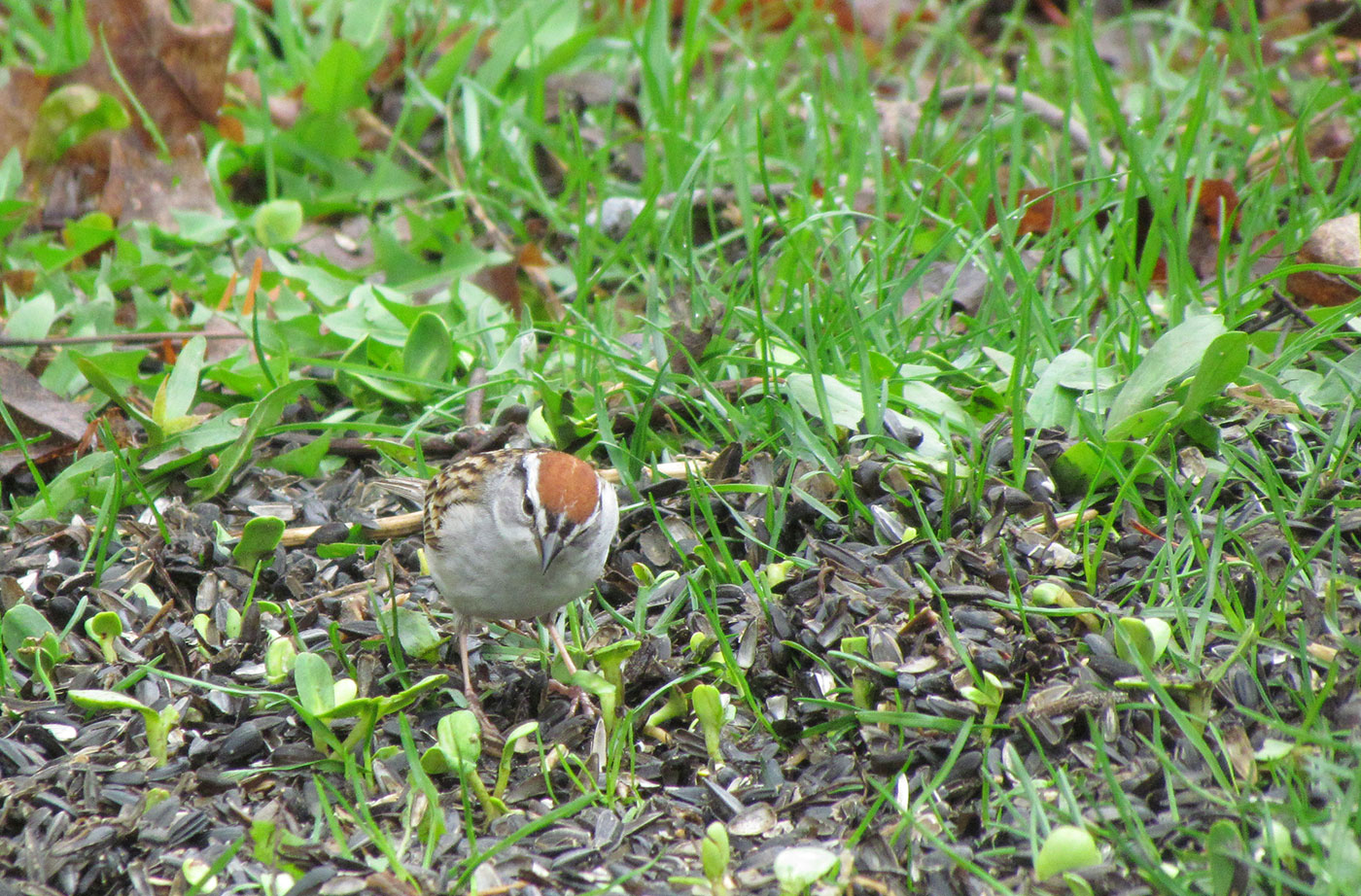 Chipping Sparrows are even more widely distributed than Song Sparrows , breeding in every U.S. state and all but one Canadian province and territory (and in much of Mexico, too). Chipping Sparrow numbers in the U.S. are relatively stable but are declining in Canada. Soon, their cheerful trills will be spilling across Maine. (Photo courtesy of Jeff Wells)

At least 28 species of New World Sparrows have been documented in Maine, and all but a few occur regularly either as breeders or in migration. Fortunately, the work the Natural Resources Council of Maine does to protect our state’s land and water make the habitat more welcoming to these little birds, whether they are traveling through or staying around to set up housekeeping.

We hope you will get out to celebrate spring and World Sparrow Day by getting to know and enjoying the sparrows in your area!

Get to Know the Voices of a Few Sparrows You Can See – and Hear! – in Maine: 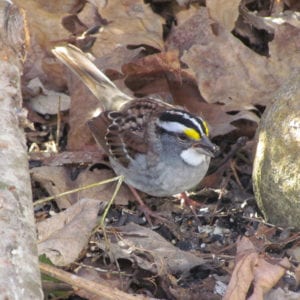 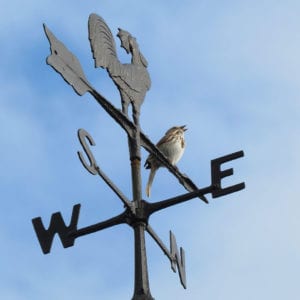 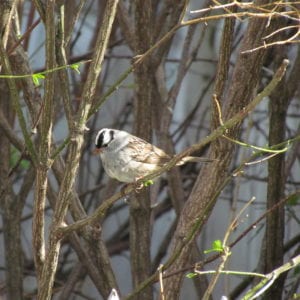