What “Ales” You? A Story of a Lost Species by St. George School’s Sadie Davis

As part of St. George School’s Alewife Restoration Project, the students have been extracting oral narratives relating to alewives and local streams. Check out a report from Sadie Davis, who reflects on a conversation with her grandfather about his experiences with alewives.

I have been told when my great grandfather was young he would eat alewives a lot. My grandfather tells me he would say, “When I was young there were so many alewives that you could drop your net into the pools at the marsh in St. George and bring up so many that your net would be half full.” Today in Ripley Creek, the same place, native alewives haven’t been seen since the 1980s. In 1985, Mr. Lyle Morris netted about six to eight bushels in the creek and after that, “like a switch,” they stopped coming. From 2009 – 2013 the Department of Marine Resources (DMR) has put 500 alewives in the marsh each year. Last summer, the State replaced the culvert on Route 131 that travels over the outlet stream connecting the marsh to the tidal creek. My class visited that culvert last month and saw that it was designed to help the alewives return. It has grooves that hold water when the water runs through. So far, none have come back. This is so different from earlier historical accounts when “Alewives were so plentiful there at the time the country was settled, the bears, and later swine, fed on them in water. They were crowded ashore by the thousands.”
(http://damariscottamills.org/fishfacts.html) 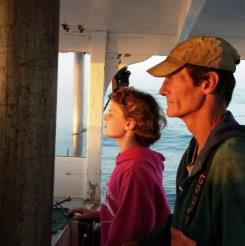 The 8th grade class is taking on the project of finding out why this is and how we can help the town bring them back. One of the interesting things that Mr. Morris told us is that when pickerel got into the marsh, they could have eaten the adult alewives and their babies. He also explained there were rock pools in the creek so that when the tide would go out, the alewives would have water where they could rest and wait until the tide came back in and continue their travel up to the Marsh. Re-creating these small pools is something that the 8th grade would like to do with the help of Mr. Morris, because he knows what they look like and where they were.

The water level on the upper side of the culvert is also different today because there used to be a beaver dam that held back water and a man-made structure that could change the water levels. They would lower the water level during the summer to grow salt marsh hay for the cows on the old farm nearby. When the water level was low, the fish wouldn’t be able to get up into the Marsh, and they wouldn’t have had a habitat to live in. The water level would be raised in the winter so they could cut ice and then store it in the ice shack to be used in iceboxes. The water would be kept high so the alewives could come into the marsh to breed. The class is going to measure the difference in the water levels today compared to the past and consider how much habitat has been lost.

I never realized how big a project this is, how all of the parts go together, like the effects of different water levels, the culvert design, and the introduction of pickerel in the marsh. I never knew how my great-grandfather ate alewives as a kid. My grandfather tells me that my great-grandfather would like to see alewives come back. I think it would be cool if four generations later, I could see alewives, too.