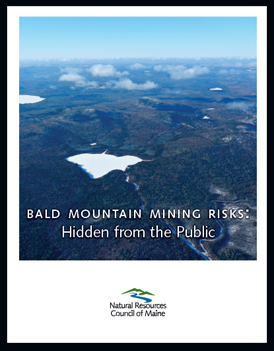 DEP Failed to Reveal the Risks to Lawmakers and the Public

NRCM produced an investigative report showing that documents in the possession of Maine’s Department of Environmental Protection (DEP), but not disclosed to Maine lawmakers or released to the public, reveal that an open-pit mine at Bald Mountain in Aroostook County is likely to pollute rivers, lakes, and streams with sulfuric acid runoff and arsenic pollution.

The NRCM report, Bald Mountain Mining Risks: Hidden from the Public, draws from consultant studies done for two mining companies that in the 1980s and 1990s pursued DEP permits for open-pit mining at Bald Mountain. These documents, secured through Freedom of Access Act (FOAA) requests, include multiple warnings that an open-pit mine at Bald Mountain would be very risky. Both companies (Boliden and Black Hawk) ended up dropping their mining plans likely, in large part, due to the problematic nature of the Bald Mountain ore deposit.

Canada-based J.D. Irving, Ltd., wants to pursue an open-pit mine at Bald Mountain in Aroostook County and has been the driving force in an effort to weaken Maine’s mining regulations.