Opposition to LD 1226, An Act to Keep Maine’s Transportation Infrastructure Safe by Providing More Sources of Revenue for the Highway Fund

My name is Dylan Voorhees and I am the Clean Energy Director for the Natural Resources Council of Maine (NRCM.) Thank you for allowing us to present this testimony. NRCM strongly opposes this legislation, which would undermine Maine’s ability to reduce our dependence on oil and lower harmful pollution without meaningfully contributing to the challenge of transportation funding. Our testimony includes important background which we hope the committee will consider, our specific reasons for opposing this bill, and some suggestions for addressing the goal identified in the bill’s title.

Maine must address twin challenges of carbon emissions and oil dependence in the transportation sector. Transportation accounts for 2/3 of Maine’s consumption of petroleum. The state’s statutory goals with regard to reduced our use of imported oil (e.g. 30% by 2030, 50% by 2050, 2 MRSA §9) cannot be achieved without deep cuts in the transportation sector. Likewise, the burning of petroleum for transportation—primarily cars and light duty trucks—is the single largest source (43%) of Maine’s climate-changing carbon emissions. In fact, we likely cannot achieve Maine’s medium and long-term carbon reduction goals (e.g. 40% by 2030 and 80% by 2050, 38 MRSA §576) without increased fuel economy and significant vehicle electrification. As such, other committees are at work this year on ways to promote electric vehicles (EVs) and EV charging stations.

Electric vehicle (EV) technology has changed rapidly over the last several years and continues to expand in surprising ways. Over the coming years, we hope this committee will find additional ways to become educated about the trends in vehicle technology and policy, which are different from anything in the last 50 years. As a matter of definition, “electric vehicle” refers to a vehicle than makes use of electricity that comes from plugging in the vehicle, and includes both all-electric and plug-in hybrid vehicles.[1] An ordinary “hybrid” vehicle generally refers to a gasoline-powered vehicle which contains a battery that is charged internally to increase fuel economy, such as a Prius. Many hybrid vehicles have high fuel-economy, others (such as hybrid SUV’s) do not. Many vehicles which are not hybrids also have high fuel-economy. All hybrids are exclusively gasoline-powered vehicles.

Electrification offers a tremendous opportunity to benefit Maine consumers, the broader economy and our environment. For consumers, EVs are significantly cheaper per mile to drive than gasoline vehicles. Here in Maine, it generally costs about 35% less per mile to “fuel” an EV compared to a gasoline vehicle, the equivalent of buying gasoline at $1.45/gallon.

Spending less money on gasoline means keeping more of our hard earned money at home in the Maine economy. That would be true even if most of electricity was imported (like our oil) because driving EVs means consumers spend less overall for fuel and therefore more on other things. But does Maine produce a large portion of our electricity in-state, and that should increase as we transition more toward renewables. Therefore EVs, like other forms of electrification of traditional oil uses (think heat pumps), are an opportunity to transition broadly from imported energy to local energy. This is an opportunity that did not exist a decade ago.

For all of the reasons described above and more, it is very clear that increased use of fuel efficient vehicles, including EVs, is the public interest and consistent with our policies to reduce dependence on oil, lower energy costs, and cut harmful pollution. The need to eventually adapt transportation revenue policies to provide sufficient highway funding cannot overshadow the tremendous economic benefits of spending less on imported fuels. This bill would add $2,500 to the cost of owning a hybrid for ten years, and $3,500 to the cost of an owning an electric vehicle. You don’t need a PhD in economics to understand that such costs will creates a major disincentive for Mainers to buy vehicles that would otherwise benefit them and the state as a whole. Maine is already one of the most oil-dependent states in the country, and we cannot afford to slow the purchase of vehicles that reduce that burden.

A Flat Surcharge on Hybrids and EVs Would be Grossly Unfair

Beyond the broader public policy conflicts, the bill applies a heavy tax on certain classes of vehicles that would result in grossly inequitable total transportation taxation. The presence of a battery is a poor basis on which to levy a surcharge, considering the fuel-economy variations in both cars with and without batteries. Consider five very real-world examples of vehicles, all of which drive 12,000 miles/year and pay 30 cents/gallon in gas tax:

The status quo may appear somewhat inequitable, although consumers driving efficient vehicles are providing important public benefits that are not accounted for here. The bill would exacerbate inequity and make many of the most efficient vehicles the most heavily taxed. Under LD 1226, some of the most affordable and practical fuel-efficient vehicles (hybrids and plug-in hybrids) would pay 4-10 times more than they currently pay, and well over twice as much as a standard efficiency vehicle.

Many call the gasoline tax a usage fee. Traditionally it corresponded reasonably well to the usage of our roads, i.e. number of miles traveled. How much one pays is also influenced by the size of vehicles: heavier vehicles use more gas and also damage the roads more. Usage and impact on roads are equitable ways to generate revenue for the highway fund. A flat surcharge based on the hardware inside a vehicle is not.

Gasoline consumption in Maine has increased pretty steadily over the last several decades, with temporary spikes and dips in response to recession or price changes. 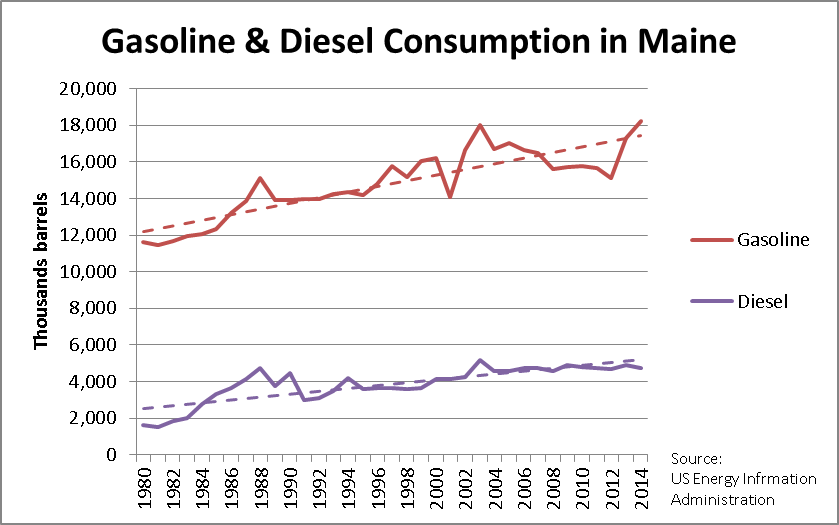 Fleet fuel economy in the U.S. is only starting to increase after decades of stagnation.

Increased vehicle miles traveled has negated most of that fuel economy benefit. The number of miles travelled declined somewhat during the end of the last decade, but that was likely a feature of the recession and miles are probably increasing again. 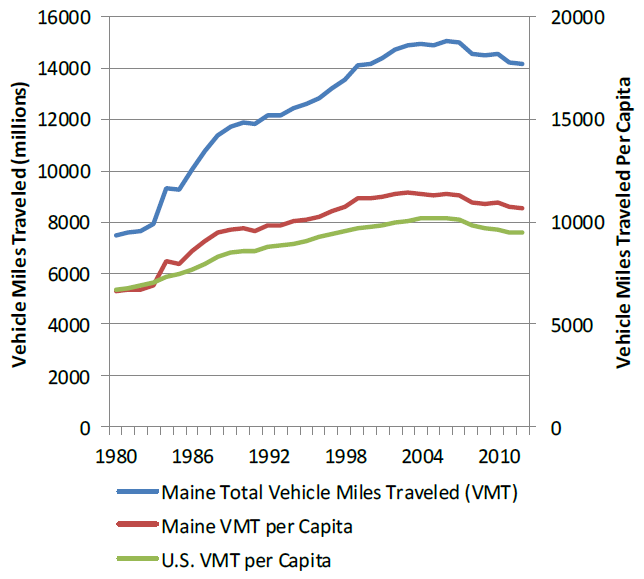 The highway revenue problem is not caused by fuel-efficiency. Electric vehicles have had virtually no impact so far. Gasoline sales have mostly gone up, but because the rate of taxation has not kept place with inflation or transportation costs, the deficit has increased. Fuel-efficiency will be a larger factor in decades to come.

The proposed tax on hybrid vehicles in this bill would raise approximately $3 million/year. Although not entirely insignificant, that amount will do little (1-2% of the need) to address the structural deficit in the highway fund of $160 million. The proposed tax on electric vehicles would raise roughly $300,000, which is insignificant in this context (0.1% of the need). That is a measly sum for which you would undermine the State’s energy policy and impose a grossly unfair new tax.

Fuel-efficient and electric vehicles are the future. If our broader energy and climate policies are effective, consumption of gasoline will begin to decline significantly. We believe there are alternative approaches to ensure that all drivers, gasoline, electric and in-between pay a fair share of maintaining our roads. Designing and implementing them will take time, but we have time. Acting now would not address the considerable challenge before you and would set Maine on the wrong course. Other states are considering these issues as well, and some are ahead of us. We should learn from them.

That is why we urge you to reject this bill and instead pass LD 1150, the transportation revenue study and pilot bill by Rep. MacLean, and use it as a vehicle (pun intended) to consider all options for modernizing transportation revenue policies in the face of the long-term trend toward vehicle electrification. It is likely that we need multiple solutions, including increases in the gasoline tax. The study should include a mix of appropriate flat, mileage-based, and weight-based fees. If done carefully, it could include vehicle cost (as our excise taxes do) as one component, so that those with more means can pay their share. We would be happy to work with the task force to consider ideas for these intertwined challenges.

We look forward to providing any additional information or recommendations as the committee works these related bills.