Neither For Nor Against LD 1149, An Act To Provide Revenue To Fix and Rebuild Maine’s Infrastructure and in Support of LD 1150, Resolve, To Establish the Road Usage Charge Task Force

My name is Dylan Voorhees and I am the Clean Energy Director for the Natural Resources Council of Maine (NRCM.) Thank you for allowing us to present this testimony on these two related bills. NRCM supports some provisions in LD 1149 and opposes others. We support LD 1150 and have some suggestions for additional considerations by the proposed Task Force.

We appreciate the very large challenge of providing sufficient, stable funding for maintaining and improving Maine’s transportation infrastructure. NRCM supports the gasoline tax as a simple and effective way to provide revenue for this need. We support the proposed increase, which like many others feel is overdue. We take no position on the various changes in fees in the bill, but we do believe the proposed surcharge on clean, energy-efficient vehicles is not the right way forward at this time.

We would like to offer three observations and two suggestions for these two bills.

First, Maine must address twin challenges of carbon emissions and oil dependence in the transportation sector. Transportation accounts for two-thirds of Maine’s consumption of petroleum. The state’s statutory goals with regard to reduced dependence on oil cannot be achieved without deep cuts in the transportation sector. Likewise, the burning of fossil fuels for transportation—primarily cars and light duty trucks—accounts for the largest share of Maine’s climate-changing carbon emissions. In fact, we likely cannot achieve Maine’s medium and long-term carbon reduction goals (e.g. 40% by 2030 and 80% by 2050) without including significant vehicle electrification. For example, a study by Synapse Energy Economics about meeting the 40% goal across the Northeast found that electric vehicles would likely be the largest and cheapest source of emission reductions (actually saving money per ton of carbon reduced.)[1]

Second, electrification offers a tremendous opportunity to benefit Maine consumers, broader economy and environment. EV technology has changed rapidly over the last several years and continues to expand in surprising ways. As a matter of definition, “electric vehicle” refers to a vehicle than makes use of electricity that comes from plugging the vehicle in, including both all-electric and plug-in hybrid gasoline-electric vehicles.[2] Attached to this testimony is a list of some of the EVs available for purchase today. This testimony does not include a primer on electric vehicles, but we would be happy to work with the committee for a briefing or to provide additional background material. (In fact, other committees are at work on ways to promote electric vehicles (EVs) and EV charging stations.)

EVs offer very significant benefits because they can substantially reduce the use of gasoline. The need to eventually adapt transportation revenue policies cannot overshadow the tremendous economic benefits of spending less on imported fuels. For consumers, EVs are significantly cheaper per mile to drive than gasoline vehicles. Here in Maine, it generally costs about 35% less per mile to “fuel” and EV compared to a gasoline vehicle, the equivalent of buying gasoline at $1.45/gallon.

Spending less money on gasoline means keeping more of our hard earned money at home in the Maine economy. That would be true even if most of electricity was imported (like our oil) because driving EVs simply means spending less overall for fuel. But Maine produces large portions of our electricity locally, and that should increase as we transition more toward renewables. Therefore EVs, like other forms of electrification of traditional oil uses (think heat pumps), are an opportunity to transition broadly from imported energy to local energy. This is an opportunity that did not exist a decade ago.

Third, electric vehicles are not responsible for declining gas tax revenue, but they could be in the future, making it a good time to begin serious planning and discussion of options. Gasoline consumption has increased pretty steadily over the last several decades, with temporary spikes and dips in response to recession or price changes. In general, fuel economy is starting to increase after years of stagnation, although increased miles traveled have meant this has not translated into less total consumption. If changes in vehicle fuel economy can be detected in gasoline consumption or tax revenue, it is not due to the several hundred electric vehicles now on the road, but on the increased fuel economy with “normal” gasoline cars and trucks. 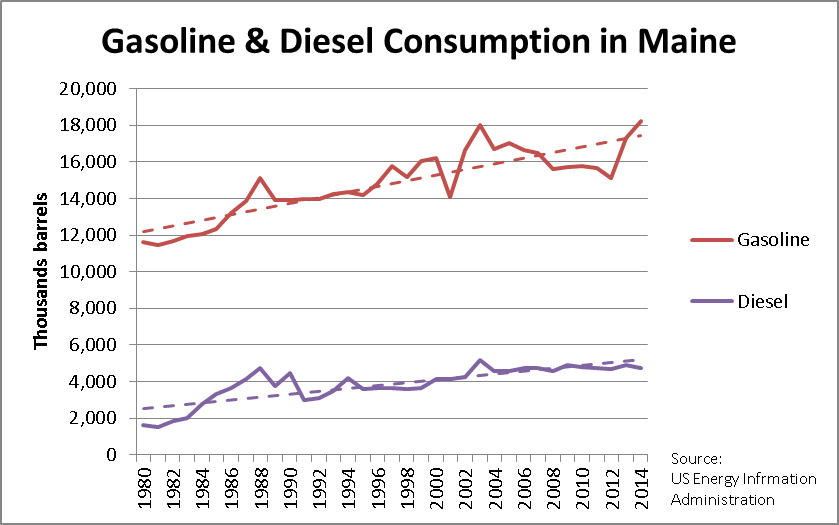 In terms of these two bills, we have too suggestions.

On LD 1149, we respectfully request that the committee remove the provisions that would assess a new flat surcharge on electric vehicles. There are several reasons why this should be done. First, the fee will discourage the adoption of cleaner, more fuel-efficient vehicles at a time when we should be doing the opposite. That is in conflict with Maine’s energy and climate policies and objectives and ultimately adverse to consumers and our economy. In addition, a flat surcharge is likely not an fair or effective way to require drivers to pay for their use of the roads. This includes the fact that some “electric vehicles” consume no gas, while others may use small amounts of electricity but consume relatively “normal” amounts of gasoline. (It is unclear whether the bill is written to include vehicles that don’t plug-in; those vehicles only consume gasoline so the surcharge would be a double fee.)

We believe there are alternative approaches to ensure that all drivers, gasoline, electric and in-between. Designing and implementing them will take time, but we have time. Acting now would raise a pittance and set us on the wrong course. Therefore our second suggestion is to pass LD 1150 and use it as a vehicle (pun intended) to consider options for modernizing transportation revenue policies in the face of the long-term trend toward vehicle electrification. We encourage you to add some language for consideration of Maine’s energy and climate policies and objectives. We would be happy to provide some language—and if the bill passes we would be happy to work with the Task Force to consider ideas for these intertwined challenges.

We look forward to providing any additional information or recommendations as the committee works these bills.

[2] The industry terms for these two types, Battery Electric Vehicle (BEV) and Plug-in Hybrid Electric Vehicle (PHEV), are somewhat confusing because both types have batteries and both are plugged-in! However both types of EVs are distinguished from the ordinary “hybrid” cars we have become familiar with, which contain a battery that is charged internally to increase fuel economy but whose only source of energy is gasoline.