My name is Dylan Voorhees and I am the Clean Energy Director for the Natural Resources Council of Maine. Thank you for allowing us to present this testimony. NRCM has been working intensely for almost a year with scores of different stakeholders to help bring before you a strong, comprehensive solar bill with broad support. The process has not been perfect and the bill before you is not perfect. However it represents the best opportunity you have ever had—and probably the best opportunity you would see for many years to come—to take the hard work of an incredibly diverse group of stakeholders and move Maine forward on solar.

Given the amount of labor and difficult compromise that went into it and the breadth of support for the bill, I daresay that if you cannot find a way to pass the bill, it will cause many to despair that Maine has any chance of catching up on solar. That seems to be what a few actually want, but it is not what Maine people want.

Many deserve credit for the bill before you, but above all I must commend Tim Schneider, the Public Advocate, for his leadership. We have not always agreed, and Mr. Schneider has been an aggressive advocate on behalf of ratepayers. In pursuit of that mission, he has also worked tirelessly to bring parties to the table—and back to the table—to think creatively about good policy ideas that achieve shared objectives.

There is so much that could be said about the bill and why it is important that you pass it. Here are five key points I hope you will consider closely.

1. The status quo is causing Maine to fall further and further behind.

As the charts on the next page show, Maine is in last place on installed solar and solar jobs in New England, and virtually last across the entire Northeast. This is not because the sun doesn’t shine as strongly on Maine as it does on our neighbors—in fact the evidence shows Maine has a good solar resource. It is because Maine has failed to modernize its policies to reflect the rapidly emerging reality of a transformation in solar technology and markets.

Maine’s increasingly anti-renewable political climate is costing the state major economic investment and clean energy jobs. From driving away offshore energy giant StatOil to scuttling terms for extremely attractive wind contracts to repeated failure to adopt solar policies, both major and minor, Maine is failing to look to the future.

The status quo would not only fail to move Maine forward, it could take us backward. That is because past Legislatures have left in the hands of the Public Utilities Commission the only policy that is helping Maine build solar, even at anemic levels. As you know, the PUC is poised to conduct a “review” of net-metering, which could result in almost anything, from a complete elimination to net-metering remaining as is for several more years. The continuing plague of regulatory and political uncertainty is terrible for job creation and is keeping Maine people and businesses from accessing the full benefits of solar power. This bill, while not perfect, attempts to move us past uncertainty. We should not make the perfect the enemy of the very good. 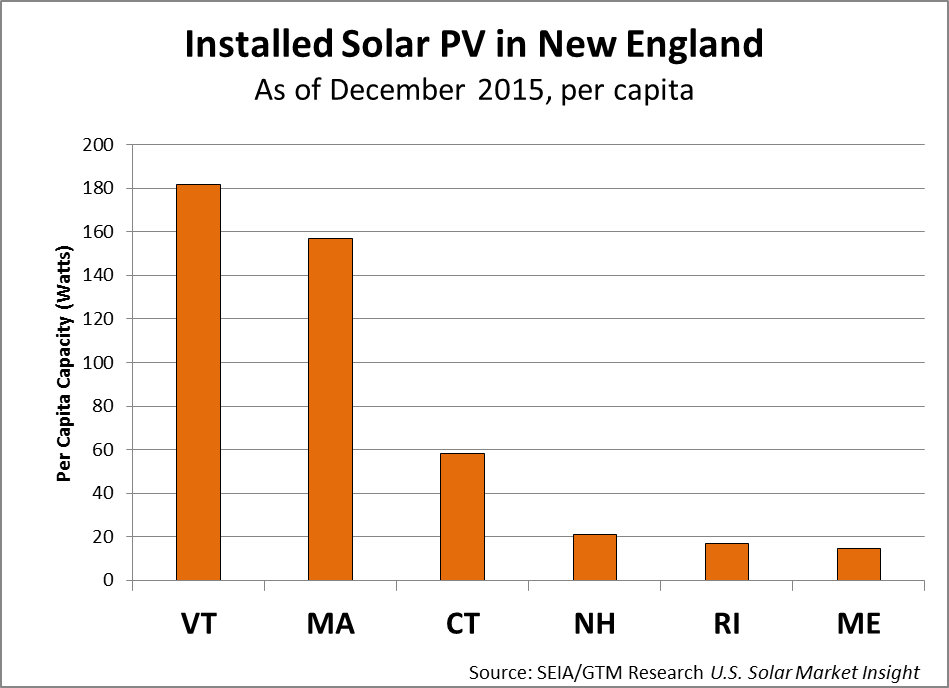 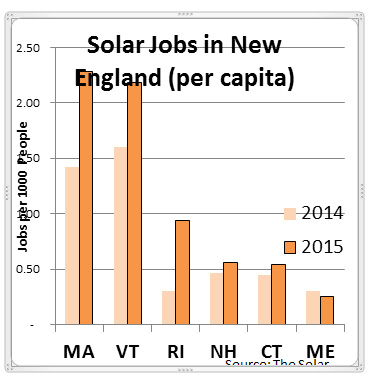 Competitive markets can be a powerful force for driving down costs and fostering ingenuity. Consumers win when they have choices, and ratepayers benefit from procuring energy in open, competitive markets. This bill uses several approaches to harness the power of competition.

It is also critical to understand that Maine must also grow and develop its solar market in order to achieve greater benefits of competition. The bill is designed to achieve steady, predictable market growth. This is not only good for the more than 800 new solar-related jobs, but it enables the ratepayers and solar owners to capture greater benefits from more competitive markets.

One of the benefits of distributed generation is that customers become investors in small- and medium-sized resources that can benefit the whole electricity system. But you can’t send tens of thousands of small investors through an auction process. The bill uses careful bilateral adjustment mechanisms so that we pay the lowest possible price for smaller solar. Under this bill, rates for solar will go down as fast as the market can allow.

3. The bill creates a framework for all distributed generation, however it is important to recognize that solar provides specific benefits.

Some have suggested that the problem with this solar bill is that it is a solar bill. The truth is, this bill creates a platform for any renewable distributed generation. It helps establish markets for aggregation of distributed generation, for energy, capacity, and renewable energy credits. The rates established in the bill would be offered for any distributed renewable resource. The fact is, very diverse stakeholders agree that none are likely to come close to the potential of solar to compete in this field.

It is a catchy talking point to say we should be technology neutral, but that simplistic idea fails to hold up when one tries to compare apples to apples. Distributed generation cannot be compared to central power plant sources—one requires major transmission services, the other doesn’t. Energy resources that require no fuel cannot be compared fairly to fuel-based supply in simple terms of price in Year 1. One has significant future fuel cost uncertainty, the other does not. The list goes on.

The value of solar is not defined by thinking of some intrinsic worth of solar energy, it is the combination of how much solar energy is worth compared to other resources or alternatives available in various markets. The capacity value of solar is nothing more than how much we would have to pay to get the same capacity from competitive capacity markets. The avoided transmission value is literally how much it would cost in transmission lines to get the same benefit. The bill does not put any additional value on solar. However the entire exercise over the last 12 months springs from the revelation that, if we can better capture it, solar can provide considerable value. If ratepayers can pay for that solar less than what it is worth in the market, they profit.

4. The bill benefits non-solar ratepayers almost to a fault.

From the beginning of the stakeholder process we expressed the concern that the Public Advocate’s proposed structure assigned too much of the value of solar to non-solar customers (i.e., ratepayers in general) and inadequately compensated solar customers for their investments. We find it ironic that some have criticized the bill for being harmful to ratepayers. While we think the bill creates the opportunity for a fair deal (that depends on the rulemaking), you should feel confident that the bill squeezes much of the value of solar into the hands of non-solar ratepayers. I guess that’s what you get when you put the Public Advocate in charge.

The PUC’s value of solar study showed that the energy characteristics of solar will make it increasingly valuable over time. The price to build or install solar, on the other hand, will continue to go down over time. This creates the opportunity for a win-win. The bill is designed to pay declining rates for solar over time but this can co-exist with solar customers getting the return on investment they need and deserve.

5. The final bill needs to ensure adequate protection for the solar industry and jobs, and keep the diversity of stakeholders aligned toward a common interest.

Finally a few words related to net-metering, As you already know, the most charged and technically challenging parts of this bill revolved around finding alternative ways to encourage residential and small business investment in solar. Net-metering is available in roughly 40 states and has proven to be the most important and effective tool to enable ordinary people to produce and consume their own power. Last year in this country, more than 2,000 MW of residential solar was installed, representing the fourth consecutive year of over 50% growth.

Unfortunately, net-metering alone has not been enough in most places, including Maine, to fully accelerate investments in solar. One reason is that net-metering works best for homes and small businesses, and not so well for larger customers or larger-scale solar. Other states have special REC programs or rebates or other incentives. (This bill places a big emphasis on offering solar investors greater certainty and predictability, rather than additional subsidies.)

In addition, net-metering’s simplicity means it is not an ideal platform for long-term rate design. Our electricity grid is going through a transformation with smart meters and non-transmission alternatives, demand response and time of use pricing. Customer-sited distributed generation and storage will be huge parts of that transformation. For most new solar customers, the “neXt-metering” approach in this bill should be very, very similar to traditional net-metering. But for regulators and utilities it will be a more transparent way of assigning costs and benefits.

So the question is: How to we continue what is good about net-metering while making adjustments? How do we set up a transition that doesn’t risk what we already have, given substantial uncertainty about what comes next?

Here in Maine, virtually every solar job we have is tied to solar that was enabled through this long-standing and simple policy. You can understand why changing it or suspending it in favor of something else sends chills through the solar market – meaning those 300 workers and their families. The revised net-metering approach will succeed or fail in part based on getting the details right though PUC rulemaking. Yes, the same PUC that some expect to weaken net-metering if you fail to act.

The bill is intended to use different checks and balances, moving forward with built-in reviews and adjustment mechanisms. One of those checks and balances is the higher level of legislative oversight known as “major substantive rules,” rules that must come before you before they can take effect. That is critical because as soon as they do, traditional net-metering will be suspended for new customers. We have worked literally to the last minute to preserve consensus on ways to increase confidence and certainty in the rulemaking process. I hope the committee will continue to work with the parties to ensure that the final bill has sufficient protections so that it can earn the broad support of solar workers and others.

We urge to vote in support of LD 1649 and move Maine out of last place. Thank you.