Senator Dill, Representative O’Neil, and Members of the Agriculture, Conservation, and Forestry Committee, I am Melanie Sturm, Forests and Wildlife Director at the Natural Resources Council of Maine (NRCM). I am testifying in support of LD 736, as proposed to be amended by the sponsor. This bill would play a significant role in helping Maine protect wildlife habitats, enhance scientific research and natural resource management, preserve biodiversity, and assist with climate change mitigation.

Maine’s ecological reserve system was created more than 21 years ago and, in that time, has become a successful network of public and private lands that protects examples of some of the many habitat types and natural features found in Maine. The ecological reserve system was established to conserve biodiversity and wildlife habitat; provide sites for long-term scientific research and educational opportunities; and serve as a baseline against which to measure environmental and biological change on the landscape over time. The legislation enacted in 2000 to establish Maine’s ecological reserve system emerged from a broad-based collaboration, the Maine Forest Biodiversity Project, which included representatives from the forest products industry, state agencies, and nonprofit organizations, including NRCM.

The Bureau of Parks and Lands (BPL) is one of a handful of entities that manages ecological reserves, and BPL’s reserves were established as a result of the 2000 law. Unlike other conservation lands, BPL’s ecological reserves are not available for timber harvest or other commercial purposes. In total, BPL currently has 19 reserves in its jurisdiction covering approximately 97,000 acres, which is less than 1% of Maine’s land area (see map on page 4). These reserves include spectacular places that are enjoyed for hunting, fishing, primitive camping, hiking, and cross-country skiing, among other allowed uses. They also offer some of the state’s premier recreation destinations, including the Cutler Coast in Washington County, Deboullie in Aroostook County, Bigelow and Mt. Abraham in Franklin County, Nahmakanta in Penobscot County, Big Spencer in Piscataquis County, St. John Ponds in Somerset County, part of the Mahoosucs in Oxford County, and the Tunk Lake Area in Hancock County.

As proposed in the sponsor’s amendment, LD 736 would protect these special places and give BPL the opportunity to designate additional ecological reserves where habitat types are not adequately protected. The original 20-year-old statute limits the total acreage of BPL’s ecological reserves to no more than 100,000 acres or 15% of the land under the jurisdiction of BPL, and it requires that the total acreage of ecological reserves not exceed 6% of BPL’s operable timberlands. These caps are not scientifically based, but rather were negotiated restrictions developed by stakeholders involved in the initial authorizing legislation. Today, these caps are no longer relevant and create an unnecessary constraint on BPL’s ability to further protect important habitat types not yet managed as ecological reserves.

Representative Grohoski’s amendment is a vast improvement on the existing law, and I would encourage the Committee to consider increasing the limit on operable timberlands to 10% rather than 8%. This 2% increase is a difference of 6,000 acres. Because many of BPL’s current ecological reserve sites are less than 4,000 acres, an additional 6,000 acres of flexibility could allow BPL to designate a couple reserves in strategic areas that increase connectivity between existing conservation lands or it could allow for the designation of a single ecological reserve in southern Maine where there are large, undeveloped, roadless blocks but the rate of development and fragmentation is relatively high.

The sponsor’s amendment would enable BPL to pursue a careful process for further expansions of the ecological reserve system. Since 2000, BPL has followed a deliberate, robust, and public-facing process to designate ecological reserves as part of its planning for all management units. BPL works with the Ecological Reserve Scientific Advisory Committee to review designations that follow the guidelines of the Integrated Resource Policy. Additions are contingent on willing seller/willing buyer land transactions. BPL’s record speaks for itself, with no controversies that we are aware of resulting from ecological reserve designations.

To further enhance the ecological reserve system, we would encourage the Committee to consider ways to add into the bill the desire for BPL to proactively seek out opportunities and work with partners to identify and acquire land, with a goal of adding ecological reserves that involve significant habitat types not yet designated as ecological reserves.

LD 736, as proposed to be amended, would be consistent with the recommendations out of the Natural and Working Lands Working Group of the Maine Climate Council, which recommended expanding the ecological reserve system, and it would be consistent with the 2019 Land Conservation Task Force report, which recommended, “Target[ing] land conservation efforts to effectively protect critical natural resources and help Maine combat and adapt to a changing climate.”

Regarding climate change, expanding Maine’s ecological reserve system can help the state achieve its climate goals through nature-based carbon sequestration and storage. Maine’s ecological reserves are large carbon sinks. On average, ecological reserves sequester 30% more above-ground carbon per acre than other lands.1 Until recently, the scientific community has emphasized the carbon sequestration power of younger trees because the rate of sequestration starts to level off in older trees. However, a study published in 2021 conducted in New England clarifies that white pines, one of the most common tree species in Maine, continue to sequester carbon beyond 80 years old.2 That means, in addition to holding a lot of carbon in trees and soil, older forests may continue to pull carbon from the atmosphere, underscoring their importance in mitigating climate change. Passage of LD 736 also would contribute toward the target in Maine Won’t Wait to conserve 30% of Maine land by 2030. While Maine’s “30 by 30” goal is not focused just on ecological reserves, the emphasis on high biodiversity areas emphasizes that ecological reserves should be a priority.

Additionally, on average, trees on ecological reserves are older than trees on other lands in Maine. It is well documented that big, older trees are prime habitat for certain species, including game and nongame species alike, and these older forests are increasingly rare in Maine. To support scientific research and improve our understanding of the natural world, it would be prudent to expand the acreage of ecological reserves in Maine, including areas with older trees.

The goal of protecting Maine’s rich array of natural communities has grown more important in the past two decades, yet there are significant gaps in the ecological reserve system. According to a recent assessment by the Maine Natural Areas Program of land conservation in Maine, none of the seven ecoregions in the state has adequate representation of all habitat types within ecological reserves or similarly managed lands. High-quality examples of many forest types, lower elevation forests in particular, are underrepresented in each ecoregion. In contrast, high-elevation habitats and emergent wetlands are relatively well-represented and freshwater shorelines and heritage fish waters are fairly well conserved compared to terrestrial natural communities.

Conserving these habitats is necessary to also protect biodiversity. One-third of terrestrial species in the U.S. are threatened with extinction.3,4 According to the National Audubon Society, 52% of Maine’s 230 bird species are vulnerable to climate change across seasons.5 Because only a portion of all habitat types are under conservation in Maine, most of which are in northern Maine, the remaining are vulnerable to degradation, fragmentation, and conversion, putting species that depend on those habitats at risk as well. This is especially true in southern Maine where there are relatively high rates of rare, threatened, and endangered plant and animal species coincident with development pressure and sprawl. New ecological reserves in this region would create accessible recreation opportunities close to where much of the population lives.

We believe the time has come to allow BPL to increase the size of the system, especially given the threats of climate change and trends in biodiversity loss, with no indication that ecological reserves do not adversely impact BPL’s budget.

I respectfully urge the Committee to vote Ought to Pass on LD 736, as proposed to be amended. Thank you for your time and consideration of this issue, and I would be glad to answer any questions you may have. 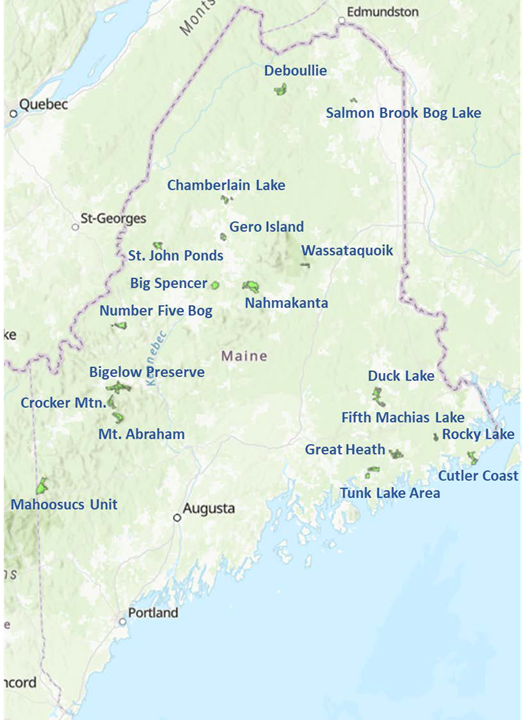 Map of the 19 ecological reserves managed by the Maine Bureau of Parks and Lands, 2022