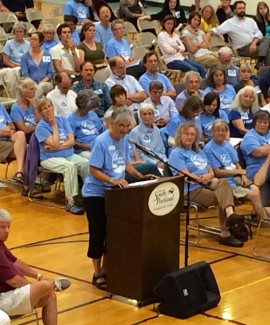 We again would like to congratulate the City Council for its diligent and transparent management of this process. Protecting the health and well-being of the people of South Portland is an enormous responsibility. Mayor Jalbert: you and the rest of the Council have risen to that responsibility while putting good governance to work.

A lot of spotlights are shining on South Portland and your decision tonight. Many big statements have been made in this community over the last year. But you have arrived at the moment of truth when you can let some of that slide away and focus on the core issue.

The ordinance drafting committee did its job well by narrowing the ordinance significantly. They addressed concerns you are still hearing about the ordinance from the oil industry, which, you will recall, were extremely broad last fall.

The only coherent message I’m hearing from oil industry opposition boils down to the fact that maybe someday they would like to load crude oil onto tankers. Although there are still no plans made public, they don’t want you to prohibit this new crude oil use.

All the rest of the comments about how you should redo the process, or the legal posturing, is incidental to the core choice you are making.

When you look carefully, both sides seem to agree on what this ordinance will do. It’s up to you to use your judgment about what the people you represent want for the future of the city.

So please think carefully about whether that intensification of heavy industry, and those new impacts which would stay with the city for a generation, are right for South Portland. We commend the path you have come along, and what you have done so far. You have a very clear path forward. Voting yes tonight is the final step that you must now take.