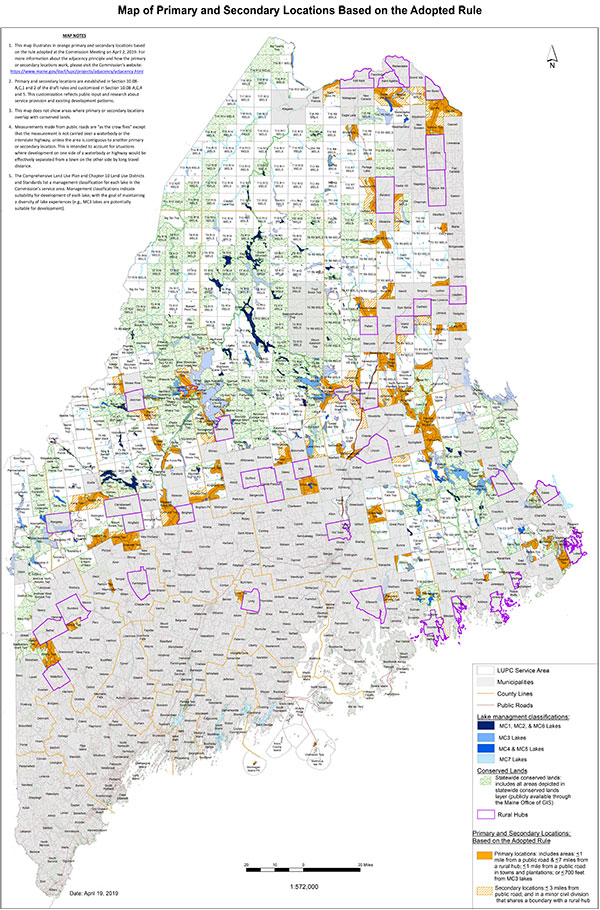 After 14 minutes of discussion at its meeting on April 2, 2019, the Land Use Planning Commission (LUPC) voted to make one of the most sweeping policy changes in its history. In eliminating the one-mile adjacency policy, LUPC made close to one million acres of land in Maine’s Unorganized Territories (UT) vulnerable to development.

NRCM is deeply disappointed in the LUPC’s decision, which ignored overwhelming opposition from Maine people.

For more than 40 years, LUPC’s one-mile policy required new residential subdivision, industrial, or commercial development in Maine’s UT to take place within one road mile of existing, compatible development. Based on NRCM’s decades of watchdogging LUPC to protect forests and wildlife of Maine’s North Woods, we know that the one-mile policy served a critical role in effectively limiting fragmentation and sprawling development by requiring new development to reflect existing, on-the ground patterns.

The new adjacency principle is displayed in the map above. There are now 39 rural hubs, and development is meant to be concentrated within a few miles of each in areas termed “primary and secondary locations,” which are represented by orange and striped, orange areas on the map, respectively.

What Changes to the Rules Did LUPC Make?

The Commission did make some limited changes to its Location of Development rules, including the adjacency principle, throughout the review process in response to thousands of comments in opposition to their proposal. However, we still have several concerns about the approved rules:

Given that LUPC’s decision to eliminate the one-mile policy ignored many of the concerns raised by Maine residents, NRCM will pursue other policy mechanisms to protect the natural resources and character of Maine’s North Woods while also strengthening the economies of communities that are adjacent to LUPC’s jurisdiction.

Incentivizing developers to build in existing communities will help protect forests from fragmentation while maintaining wildlife habitat and migration corridors. Furthermore, the forests, lakes, and rivers that are the backbone of Maine’s forestry and outdoor recreation industries in the North Woods will be better protected when new development is not scattered throughout the mostly undeveloped UT.

Evaluation of the Effectiveness of the New Rules

The LUPC is charged with periodically evaluating the effects and effectiveness of the new Location of Development Rules. In September 2020, agency staff released a draft Work Plan describing the information they plan to collect to conduct the evaluation. Based on public feedback, including from NRCM, the LUPC updated the Work Plan, and the Commission approved it in January 2021. The Work Plan can be found here.

News clips during the rulemaking process that amended the Location of Development Rules in 2019: