Leading the Way in e-Waste Recycling 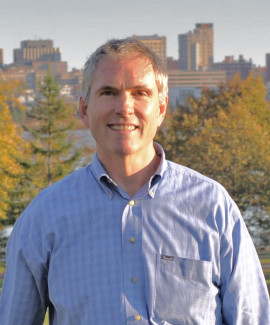 In 2003, NRCM took on the task of resolving the developing crisis of discarded and highly toxic electronic waste, or “e-waste.” Maine was not the first state to discover it had an e-waste problem but took the lead in finding a workable solution. “Our investigation showed that e-waste was being stockpiled in people’s homes and spilling out into Maine’s environment,” says former Maine legislator Jon Hinck, who served as staff attorney when NRCM was working to get the bill passed. “In one old tourist cabin set along a river, we found a tangled pile of broken TVs and computer components. Another time, an NRCM member called when one Maine town woke up to find that someone had dropped an old, busted-up console TV right in the middle of the town square.”

Although e-waste was fast-becoming a problem, Maine taxpayers were not anxious to pick up the tab, and Maine retailers didn’t think they should have to shoulder this burden, either. “We honed in on the companies whose names were emblazoned on the equipment, the companies whose engineers determined the products’ contents regardless of whether they were easy to recycle or not—the companies who make the most money when the consumer takes home the product,” Jon explains.

The first hurdle was getting the right provisions and language for an e-waste bill. This took a year of research and a full state-led stakeholder process. “NRCM got behind the draft manufacturer responsibility law that emerged from this work and helped to ensure that it was introduced in the Legislature and sent to the right committee.” NRCM soon found that Apple, Mitsubishi, Sharp, Panasonic, Philips, and other giants were lining up to fight manufacturer take-back. “We had HP with us and Dell was not opposed,” says Jon, “but otherwise, we were up against all the big names in electronics.” The companies opposed to manufacturer responsibility hired more lobbying power and appeared to be unfazed by those who had a different view.

“The e-waste battle in the Legislature broke some new ground for attempted influence-buying, but it was gratifying in the end to affirm that facts and reason can still prevail over sheer lobbying power here in the Maine. We won with heroic efforts from grassroots supporters and some enlightened Maine businesses who care about our environment and understand what makes Maine special.” The Maine e-waste manufacturer responsibility law was first-in-the-nation legislation—a huge achievement. With the passage of one law, NRCM helped keep many tons of toxic materials out of Maine’s environment and continues to save Maine people millions of dollars in taxes.

“With e-waste and other product stewardship efforts, NRCM has made great strides creating incentives to remove mercury, lead, and the newer endocrine-disrupting toxics from products that would otherwise end up in our air, land, and water,” says Jon. “We understand that when you put poison into the stuff we use every day, that poison comes back at you in the air you breathe and the water you drink. Product stewardship is an important part of earth-keeping and air and water protection.”