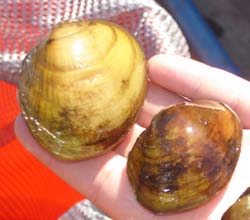 Cool fact: Mussels may move no more than a few feet during their adult lives, and the only time that they can move great distances is during the larval phase when they are hitchhiking on fish.

The empty shells scattered along the shallow edges of the Kennebec, Sebasticook, and Penobscot rivers are not clams, but the remains of freshwater mussels like the yellow lampmussel. The shells may have been left behind by an otter, muskrat, or raccoon after a meal. By serving as food for river mammals, filtering the water for their own food, and linking to fish populations, freshwater mussels play a unique role in river ecosystems.

Of all the earth’s continents, North America contains the greatest diversity of these bivalve mollusks, with 300 different mussels, or roughly one-third of all known species.

Yellow lampmussels are large (up to five inches long), with a yellowish tinge. They look similar to another mussel, the tidewater mucket, but yellow   lampmussel is not quite as bronze. According to Maine Department of Inland Fisheries and Wildlife, the yellow lampmussel is currently known only from the   Penobscot, St. George, and lower Kennebec River watersheds in Maine. They can live as long as 15 years.

In late summer, male yellow lampmussels release sperm that is then filtered out of the water by females. The female broods the fertilized eggs until the   following year, when she releases thousands of young mussels (called glochidia). The female waves a fleshy appendage shaped like a minnow to attract fish,   because the larvae must attach to a fish “host” in order to grow to adulthood. When a fish bites the lure, the female releases her young. The glochidia attach   to the fishes’ gills (harmlessly), where they grow into tiny mussels before releasing and settling to the bottom, in areas of silt, sand, gravel, or even cobble. Using a muscular “foot,” the mussels burrow into the bottom and anchor themselves. Once settled in a good spot, they continually filter the river water for food, straining out bacteria, algae, and other particles of organic matter. In this way, freshwater mussels help to maintain and improve water quality.

Known fish hosts for the yellow lampmussel are yellow perch and white perch. Because each mussel species uses a specific kind of fish as host, their populations are linked to those of their preferred host. The linkage also means that sustaining and restoring populations of mussels requires attention not just to habitat, but to fish passage as well.

According to biologist Ethan Nedeau, mussels do not like change. “Mussels may move no more than a few feet during their adult lives, and the only time that   they can move great distances is during the larval phase when they are hitchhiking on fish. Mussels either persist or die; they cannot escape an area   if conditions become inhospitable. Once gone from an area, it may take years or decades for them to return, depending on the distance to the closest viable   population,” he wrote, urging close monitoring of mussels during dam removals.

As the Fort Halifax dam on the Sebasticook River was dismantled in July, volunteers helped resource managers relocate mussels that were exposed when the   impoundments drained. Mussels are one of the most endangered faunal groups in   the world. By affecting mussels, their habitat and fish hosts, pollution and   dams are two major threats to freshwater mussels. The yellow lampmussel has declined throughout its range and has been lost from many rivers in the   Northeast, and in Maine it is listed as a threatened species.