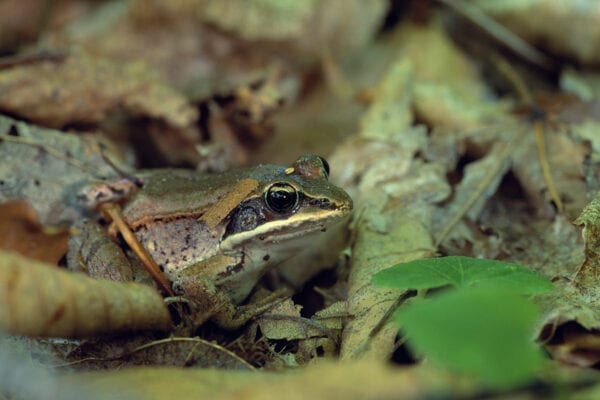 Cool Fact: Wood frogs use temporary wetlands, called vernal pools, for breeding. Wood frogs are essential for healthy forest ecosystems. NRCM worked very hard during the 2011 legislative session to prevent passage of a bill that would have weaken protections for vernal pools.

With spring in Maine comes the return of many wonderful natural sounds. Among them, the short, distinctive raspy clucks of the wood frog (click on link to hear sounds of frogs recorded by Judy Berk), which some characterize as sounding like the quacking of a duck. About two inches in size, the wood frog is typically tan or dark brown overall, with a white belly that may show dark mottling. They have a distinctive dark “mask” that extends to behind ear, a light stripe on the upper jaw, and a dark patch on the chest near the base of the front legs. Some wood frogs bear a pale line down along the middle of back. Unlike many frog species, the toes of the wood frog are not fully webbed. Males have the classic “swollen thumbs,” which helps them cling to the slippery surface of the females during mating.

Even before the ice has melted from water sources, wood frogs begin to breed. Here in the eastern U.S., they prefer moist forests and woodland habitats where vegetation is relatively heavy. They seek out vernal pools—temporary pools of water in forested areas—for breeding. Females emerge quickly from hibernation and lay large clumps of bluish colored fertilized eggs, often together, in just one or two days. These eggs are typically partially submerged, attached to underwater sticks and twigs. Once their eggs are laid, these primarily diurnal frogs disperse into the surrounding forest, as they are considered a terrestrial species.

By late May through early June, the eggs hatch and become tadpoles, most of which are an important food source for snakes and other woodland creatures. The surviving tadpoles become adult frogs by August. They feed on insects, worms, and other invertebrates. In winter, wood frogs hibernate in forest debris.

The geographic range of wood frogs extends throughout the northeastern U.S.   north to Canada and Alaska and south to northern Georgia, east to Tennessee and Kentucky. As a bonus cool fact: The wood frog is the only North American frog that occurs north of the Arctic Circle.