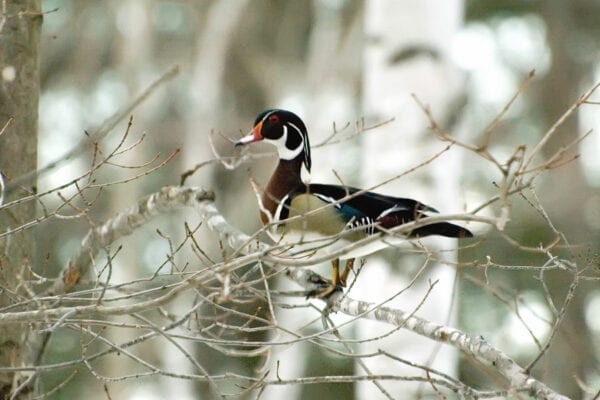 Cool Fact: Female Wood Ducks will practice egg-dumping, or “intraspecific brood parasitism” in which they lay eggs in other Wood Duck nests, leaving them to be raised by the other female. This is more apt to happen when artificial nest boxes are placed too close together.

One of North America’s most beautiful waterfowl species is the Wood Duck. They are so colorful, and their shape so distinctive, that they are difficult to confuse with any other duck species. Males are especially colorful—a combination of iridescent greens, blues, tan, and chestnut. Their bold white chin strap and facial stripes adds to their distinctive beauty. Females, grayish-brown with a delicate white eye ring, are less colorful but also handsome. Both have a strong crest.

In the breeding season, Wood Ducks are found along rivers, small ponds, and swampy wooded areas. Most spend the winter in the southeastern U.S. (with a few sometimes overwintering north of that region, including, rarely, in Maine). They begin pairing up in January and are already paired when they arrive back to their breeding grounds in Eastern U.S. north to southeastern Canada and along the Pacific Coast of the U.S. to the southern edge of British Columbia and eastward to Montana. They breed in pre-existing cavities in trees (they cannot excavate their own cavities) but also will accept nest boxes if placed in the right habitat. They prefer trees that are located near or over water, though they have been known to nest more than a mile from water, and nests have been found more than 50 feet off the ground.

The female lays nine to twelve eggs, whitish or tan in color, in the nest, which is usually made of down. Soon after hatching, young Wood Ducks jump from   the nest cavity to the water or ground below, paddling through the quiet waters close to their mother. It’s during this time that many are taken by snapping turtles and other predators. They are one of few ducks that can produce two broods each year.

Wood Ducks are “dabblers,” meaning rather than dive as some duck species do, they tip their heads into the water, their rumps in the air, and only make   shallow dives for food. They eat arthropods and plant materials, and have been known to fly dry land for acorns and grains, even blackberries and wild   cherries.

It’s not uncommon to see Wood Ducks in small groups. When startled, they may take flight—listen for the distinctive whistle of their wings. Both males and   females vocalize; the female gives a loud woo–EEK while the male’s voice is a lower jeee?

Wood Ducks are so common in Maine that it might be hard to believe that they were once hunted nearly to extinction during the late 19th and early 20th   centuries, until the hunting season was closed in 1918. Since then, Wood Duck population numbers have rebounded strongly, and estimates now put their numbers at more than a million and are once again hunted. Nonetheless, they continue to face threats.

Here in Maine, the Department of Environmental Protection proposed regulations to weaken protections for inland water bird habitat, including breeding habitat used by Wood Ducks. NRCM fought hard against the proposal and successfully convinced the Board of Environmental Protection to require a 150-foot buffer zone and consultation with the Department of Inland Fisheries and Wildlife for any construction that would take place in the period of time when water birds are most active nesting and rearing their young.