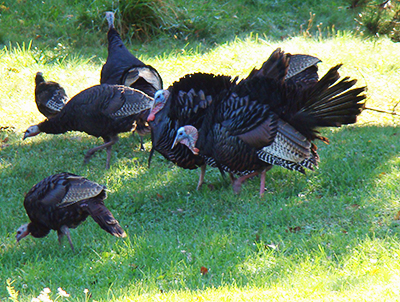 Cool Fact: Wild Turkey is one of only two domesticated bird species that are native to the New World. The other is the Muscovy Duck. Many people associate turkeys with Thanksgiving Day. And why not? Turkey is a staple at tables all across the country during this festive holiday. But there is far more to the Wild Turkey than you may think.

Here in Maine, Wild Turkeys (Meleagris gallopavo) are a common sight under bird feeders, in fields, along roadsides, and just about anywhere where they can find nuts, berries, insects, and other food items. They live year-round across North America (including Maine), and in every state except Alaska. Of the 7.8 million Wild Turkeys that breed across the continent, 89 percent occur in the U.S. Another 10 percent occur in Mexico, and the remaining, roughly two percent, make their home in Canada.

Nowadays, a flock may dart across the road in front of your car on any given day, but it wasn’t always that way. There was a time when the Wild Turkey was almost extinct. Their comeback is reason to be thankful. It also makes them conservation success superstars.

At the turn of the 19th century, Wild Turkeys had been nearly hunted to extinction. Concerned people tried releasing farm birds into the wild, but without success. In the 1940s, however, Wild Turkeys in one area of the continent were caught and released in areas where numbers had dwindled or disappeared. The result was a resounding success, and today, Wild Turkeys are now found throughout North America, and can be hunted without risk of endangering the population. A favorite among hunters, the U.S. Fish and Wildlife Service estimates that 21 percent of hunters in the U.S. hunt turkeys, making the species second only to deer in popularity.

Here are a few more giblets of turkey trivia: You probably know that Wild Turkeys are polygamous, with the handsome toms gobbling and strutting about with tails fanned out to keep their harems interested. The males have nothing to do with raising the young, which hatch in nests that are little more than a shallow depression in the soil lined with whatever dead plant matter is there at the nest site. Though Wild Turkeys have just one brood per year, the clutch size can be anywhere from 4 to 17!

How about another serving of trivia: Did you that know Wild Turkeys have good eyesight, strong hearing, and are very good runners? When startled, or darting across a road, they can scurry surprisingly fast for a bird that looks as prehistoric as they do! And how about this: Wild Turkeys often roost over water, as an extra safety measure against potential predators such as coyotes and foxes. What if they should fall in? No worries; Wild Turkeys can swim, doing so by tucking their wings in close to the body, spreading their wide tails, and kicking through the water.

You’ve probably heard the term “talking turkey” and may have even used it yourself to describe a frank conversation. Some say this traces back to the colonists’ dealings with the Native Americans, though that has not been proven. One more morsel of turkey information: It could be that the name “turkey” is a holdover from the shipping routes through Turkey (the country) as the traders brought the birds to European markets. As winter approaches, you could see as many as 200 wild turkeys in a single flock, foraging for seeds and berries in clearings along field and forest edges. If you’re a bird-feeding enthusiast, you may also have shared a feast of seeds with this symbol of the Thanksgiving Day feast. The next time you see a flock, remember to dish about the bird as a story of conservation success, worthy of a silver platter.