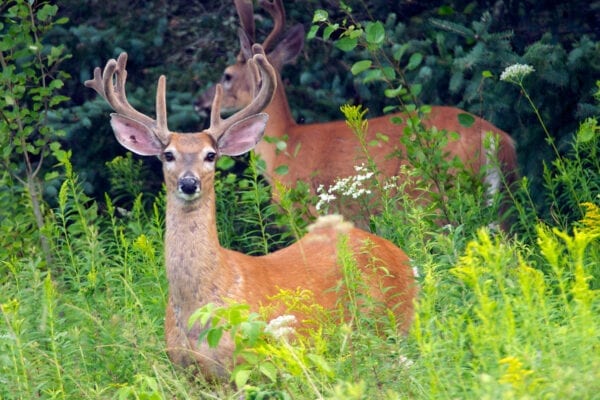 Cool Fact: The summer coat hairs of the white-tailed deer are short, thin, and straight; its winter coat hairs are longer, thicker, curly—and hollow, so that the shafts will fill with air for added warmth.

Rare is the person who does not recognize a white-tailed deer when they see one! Their fur is a rich, reddish-brown in summertime and grayish-brown in winter. They stand at about three and a half feet tall at the shoulder and measure about six feet in length. Females weigh up to 250 pounds, with males weighing in at as much as 400 pounds.

When we think of deer, we think of antlers, bone-like structures sprouting from the animal’s head that begin to grow in spring. A few females will grow antlers, but this trait is more of a guy thing. Males may use their antlers as weapons during the rut, and the opponents may remain entangled and die of   starvation. Antlers are rich in blood vessels that carry nutrients through them as they grow, reaching their full size by autumn. In late winter, the antlers are shed when the deer rubs them against trees, shrubs, and rocks.

The tail—brown above, white below and held in a “flag” position when the deer is startled—measures about a foot in length. When frightened, the deer offers a loud snort to communicate danger just before it flees. These animals can run up to 35 miles per hour, can clear obstacles up to 8 feet in height, and can leap some 30 feet into the air in a graceful arc.

White-tailed deer are found across the state of Maine in mixed forests and fields along the edges of a forest, particularly near water. In winter, deer rely on “deer yards,” also called “deer wintering areas,” for shelter from the cold and for food. Maine’s forestry regulations encourage protection of these areas deer need to survive, but unfortunately, not all companies comply, including Plum Creek real estate investment company, which has been fined for violations.

Largely nocturnal, white-tailed deer may be seen almost anytime year-round. They follow well-worn paths—marked by their split heart-shaped tracks that form a narrow point in the direction of the animal’s movement—and small mounds of scat (pellets that measure about 3/4of an inch). Watch for raggedly browsed vegetation along these trails, or for tree bark rubbed off by antlers. Deer beds, flattened areas where the animals rest during the day or as they wait out a snowstorm, may be found in secluded areas of grass or snow. When snow gets heavy, these animals that typically remain in loose herds, will congregate in larger herds, or yards.

White-tailed deer are an iconic part of Maine’s forested landscape. NRCM works for forest protections that provide protections for this much-loved species.

This Creature Feature was provided by Catherine Schmitt, a biologist who lives in Bangor.