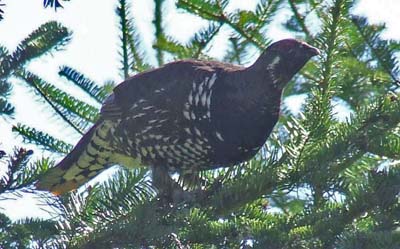 Cool Fact: The gastrointestinal organs of the Spruce Grouse change according to seasons. In winter, the gizzard expands by about 75 percent, with other digestive features expanding by about 40 percent. This accommodates the bird’s need to increase food intake during colder months.

You probably know that thousands of people travel to Maine to see the Atlantic puffins that breed on offshore islands along our rocky coast. But did you know that many people also come here to see a bird you may not have even heard of?

The Spruce Grouse is one of many “boreal specialties” for which Maine is famous among birders. Its year-round range extends northward from parts of Maine across the vast boreal forest region of Canada and Alaska, making our state one of the best places in the lower 48 to see one of these beautiful yet inconspicuous species. As the name suggests, Spruce Grouse inhabit coniferous forests of spruce, pine, or fir, where it feeds mostly on pine and spruce needles, foraging both on the ground and in trees. During summer months, they sometimes also feed on small invertebrates. The male’s plumage is striking: dark gray and brown overall with strong white barring on the belly and lower breast. Red combs above the eyes are another distinctive feature. Female Spruce Grouse tend to be grayish overall, though also with strong barring on the underparts. Both the plumage and habitat can make the Spruce Grouse hard to see, making it the bane of many birders. Stories abound of birders combing an area known for Spruce Grouse and finding no sign of the bird, only to hear from another birder later who saw a female parading her chicks in the same spot that same day! Several areas of Maine are well known for Spruce Grouse. These include the spruce-dominated forests in the Rangeley area and also parts Downeast, where Spruce Grouse Lane in Jonesboro is a destination for many birders hoping to see this elusive species. Baxter State Park and Moosehead Lake are also fairly reliable places to look for the bird. Like many boreal species, Spruce Grouse can be fairly tame once you find them; in fact, their tolerance to fairly close proximity means they don’t flush so readily, making them that much harder to find.

In the spring, Spruce Grouse males give showy displays to establish territories and attract a mate. They fan and sweep their tails and give loud wing claps. The birds nest in a depression formed in the ground, lining it with pine or spruce needles and feathers. They prefer to nest at the best of a tree, with overhead cover. The female lays four to six eggs, olive-colored and speckled. Unlike their Ruffed Grouse relatives, Spruce Grouse are not allowed to be hunted. In some states, the Spruce Grouse is listed as “endangered” or “threatened.” Spruce Grouse are a great reminder that Maine is a special place, not only for people but also for wildlife!