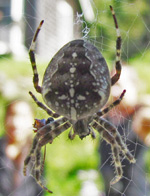 Yet not one of Maine’s 600-plus species of spiders are truly poisonous to humans (and barely 100 of the 43,250 species worldwide are life-threatening).   Though most can bite, they usually don’t. Spiders aren’t insects. They don’t damage crops, they don’t spread disease—but they eat the bugs that do. Spiders are food for frogs and birds.

“Spiders compose an outcast race, the age-old object of human innuendo and reprehension,” wrote Maine author, Audubon Magazine editor, and spider expert Frank Graham, Jr., who began paying attention to insects after reading Rachel Carson’s Silent Spring, published 50 years ago this year. Graham realized that insects and spiders were vital members of the ecosystems where he went in search of birds.To see the spider’s drama of predator and prey, their architecture of tensile silk, zoom in on blades of grass, branches of shrubs, woodpiles, eaves and doorways. Look in the morning, when dew cloaks their webs with silver. While humans have invented plenty of synthetic fibers over the last 150 years, we have never been able to replicate a spider’s technique of stretching the silk after spinning, aligning the fiber molecules into a stronger whole.

You might see one of Maine’s striking but common spiders, like the cross orbweaver, Araneus diadematus. This arachnid builds a large web, usually about two feet off the ground or in the eaves of houses and other buildings, which it uses to trap flying and jumping insects.

The yellow garden spider, Argiope aurantia, also builds a large, circular web, but prefers to stretch its home among tangled grasses, weeds, briars, and other low vegetation. Argiopi decorate their webs with a bold, zigzag band of silk. When threatened, they shake and vibrate in the web, creating a blur that appears larger than their actual size, scaring away predators.

Not all spiders build webs—some are active hunters. The fishing spider, Dolomedes scriptus, is Maine’s largest native spider. From a nighttime perch on a tree trunk, fencepost, or wall, the fishing spider ambushes large insects and even minnows or tadpoles, if it is waiting along the edge of a stream or lake. Fishing spiders can skate across water and dive beneath the surface, although they can also be found in the woods.

With eight prominent eyes and compact body, the jumping spider (Salticidae family) is a swift hunter. Getting ready to jump, it raises the blood pressure in its legs then releases, launching like a spring.

Frank Graham has counted more than 300 species of spider within the boundaries of his hometown in eastern Maine. How many can you find?