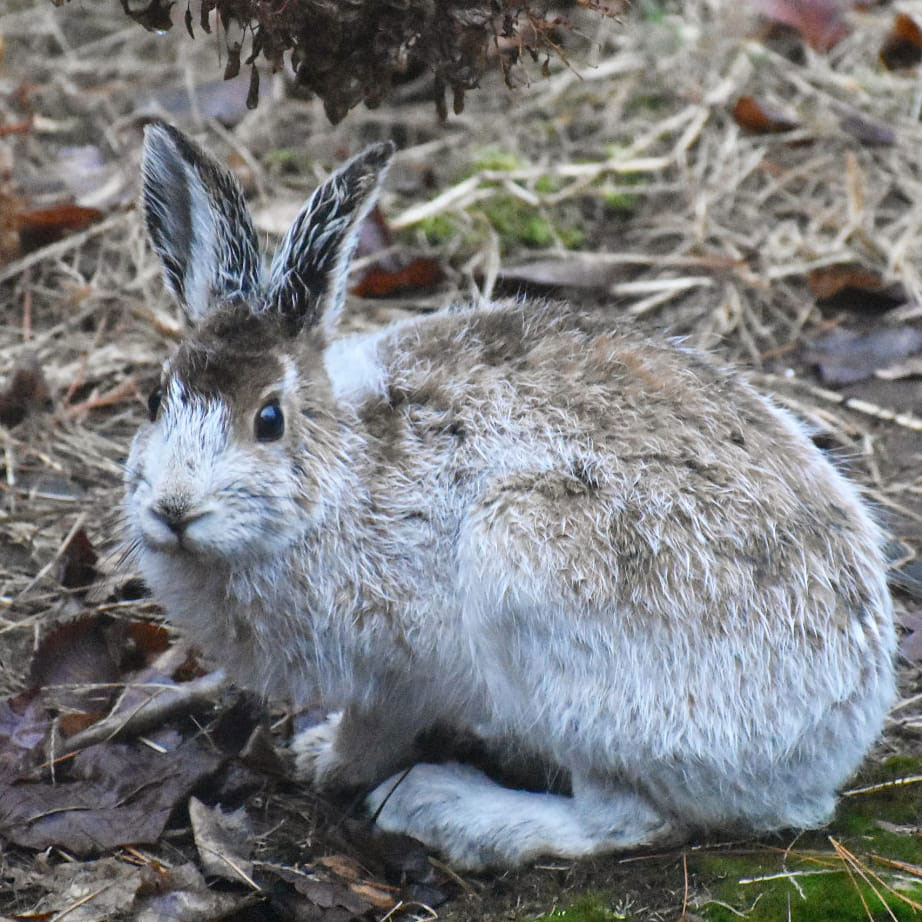 A snowshoe hare in Richmond changing from winter to spring coat, by Beth Comeau

Cool fact: Except in very southernmost Maine, where they overlap with the cottontail rabbit, snowshoe hares are the only wild “rabbit” species in the state.

Somewhere right now, in the dense spruce-fir forest of northern Maine, a wild cat is stalking a white hare. The cat, a lynx, is hungry; the hare is alert. Both are well-adapted to the deep snow and cold.

Together, they repeat a scene in a cycle older than memory: A disturbance clears the forest, and within a few years appears new growth of birch, red maple, aspen, cherry, alder. The sticks poking out from the snow provide abundant food for hares, who cleanly snip the tender shoots with their two rows of sharp front teeth. Early in the morning and late in the day into the night, they chomp away on twigs and bark or dig down for grass beneath the snow, shaping the Northern Forest. During the day, they rest in dense groves of spruce and fir or thickets of brush and grass. Their summer-brown fur turned white to match the landscape, tips of the long ears black, the hares hop and shuffle with their big feet, covered in long lofty hairs, like snowshoes.

The hares grow fat and healthy and promiscuous. Breeding begins in March as the days lengthen and the snowpack softens, and the hares shed their white fur for brown. Several litters of young, called leverets, will be born, fully furred and open-eyed, ready to be on their own within weeks. The seasons turn and turn again.

As hare populations increase, eventually so do populations of their primary predator, Canada lynx. Bobcat, coyotes, red fox, weasel, mink, fisher, marten, goshawk, and Great-horned Owls also prey upon snowshoe hare, but the cycle is best documented for lynx. With more hares around, female lynx give birth to more kittens. With more lynx around, most hares won’t survive a year, though they can live five years or more. When captured, injured or frightened, they may scream. Those that do survive experience increased stress, the threat of predation encoded in hormones and passed on to the next generation. Snowshoe hare populations begin to decline, and a few years later, lynx and other predators decline, too. Every 10 or 12 winters, the cycle repeats. 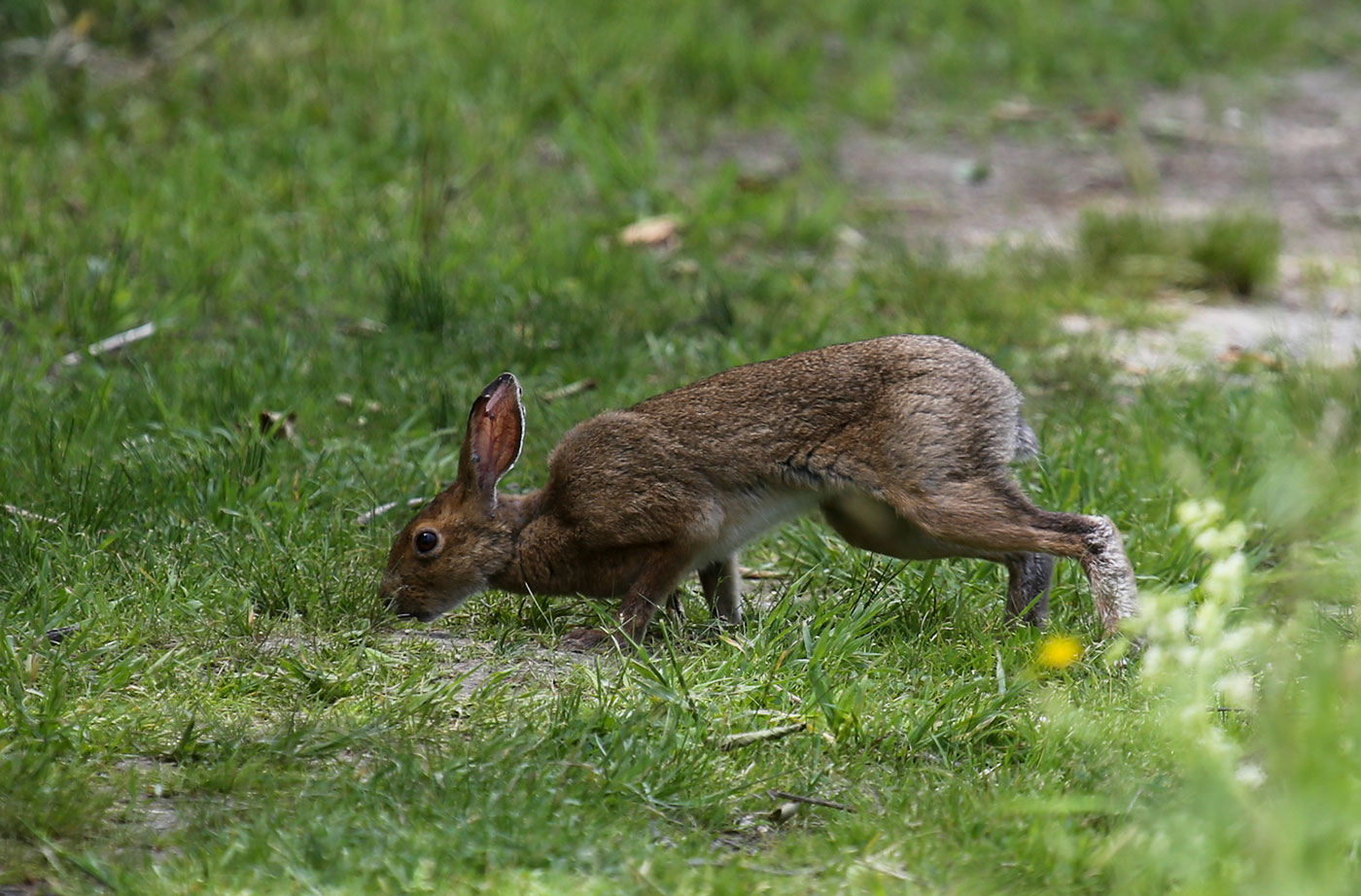 A snowshoe hare in its spring/summer brown coat, by David Small

Of course it’s not that simple. Humans, too, are predators, shooting hares from fall through winter (usually with the help of beagles), sometimes for their fur and meat (but usually not). Weather has a role. But the cyclical relationships of place, predator, and prey are known throughout the snowshoe hare’s range, from the edge of the northern tundra through the boreal forest, and south along the mountain ranges as far as conifers grow. Except in very southernmost Maine, where they overlap with the cottontail rabbit, snowshoe hares are the only wild “rabbit” species in the state.

Beyond their cyclical fluctuations, snowshoe hare populations in Maine have declined to half of that observed in the early 2000s, according to the US Fish and Wildlife Service, and they are predicted to decline further as the globe warms. A statewide assessment by Manoment Center for Conservation Sciences identified snowshoe hare as “highly vulnerable” to climate change, in part because warming temperatures are expected to shrink spruce-fir habitat. Not any old spruce-fir forest will do for the snowshoe hare. They need a very specific kind of spruce-fir forest, the regenerating kind. They use dense stands of young trees 8-16 feet tall for “daytime sanctuary,” and in winter find food in areas with new woody growth. Where sanctuaries are separated from food sources, they prefer to travel between the two through older forests of taller trees. They are not able to disperse long distances across the landscape in search of new habitat.

Their habit of changing color, perhaps the most famous thing about them, is also now a source of vulnerability. The molt coincides with changes in day length, which no longer coincide with snow cover. They do not seem to be aware that their camouflage is now a liability. They go on with their resting, eating, forest-traveling days and nights as they always have, running white against the increasingly snowless ground.

Across centuries and cultures, hares have symbolized vitality and fertility, lust and chastity, purity and rebirth, cowardice and cunning—all things that don’t last very long. For the snowshoe hare, a relation of the White Rabbit in Lewis Carroll’s Alice in Wonderland, time is always running out, the lynx always following close, the trees growing out of reach, the cycle of the winter forest unraveling one season at a time.

Catherine Schmitt is a science writer based in Bangor. She has written many Creature Features for the Natural Resources Council of Maine. For more of her writings, visit her website at catherineschmitt.com.