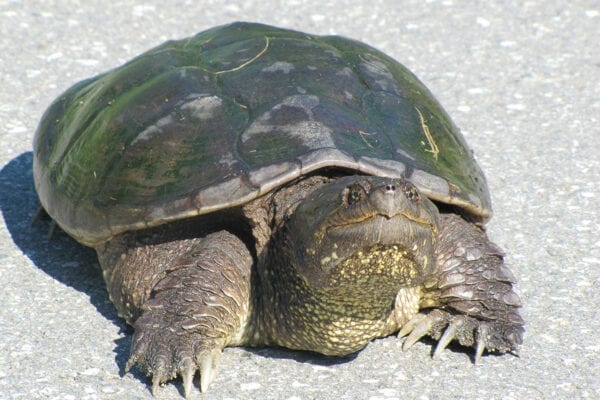 Cool Fact: The shell of a snapping turtle is full of nerve endings and sensitive to scratches.

First, about that snap.

Snapping turtles can’t pull their head and limbs into their shells, so they use their powerful jaws in self-defense. They can raise up on their hind legs, stretch out their neck and, like lightning, SNAP! They reserve this talent for extreme situations, such as when a canoe paddle interrupts their romance or a driver tries to move them out of the road.

Their other form of defense when picked up is to emit a foul-smelling urine.

More often, they are placid. A person could be almost standing on a turtle buried in marsh mud, or a few feet away from a turtle laying eggs without notice. Underwater, they have a “shy and retiring nature,” according to Malcolm Coulter, writing in Maine Amphibians and Reptiles. They walk along the bottom more often than they swim, and they rest more often than they walk. A person could reach into the water to tickle a snapping turtle’s chin or scratch its back without harm to person or turtle. Indeed, they seem to enjoy a scratch. They have sharp hearing and vision.

Humans are relative newcomers to the turtle’s scene. Snapping turtles have been around for 40 million years, and their ancestry dates back 200 million years—one of the oldest vertebrate groups still alive today. They have not changed much, either, except for their aquatic habit—scientists think turtles evolved on land. They shared the Earth with brontosauruses and mastodons.

An average snapping turtle weighs 17.5 pounds but can be as much as 40 pounds and longer than three feet. The shell is somewhat flat, thick, and rough-edged, though full of nerve endings (sensitive to scratches). On older turtles, the growth of algae can give the shell a greenish-gray cast. Some algae grow nowhere else but the backs of turtles.

A snapping turtle’s shell only partially covers the body, revealing muscular legs with sharp, curved claws and skin covered with “wart-like tubercles.” The head is thick, stout, with a beaked snout and sharp jaw surfaces, not teeth. Raised bony plates form spikes along the tail.

It is reasonable, then, that snapping turtles are often mistaken for dinosaurs, especially by the very young seeing them for the first time. 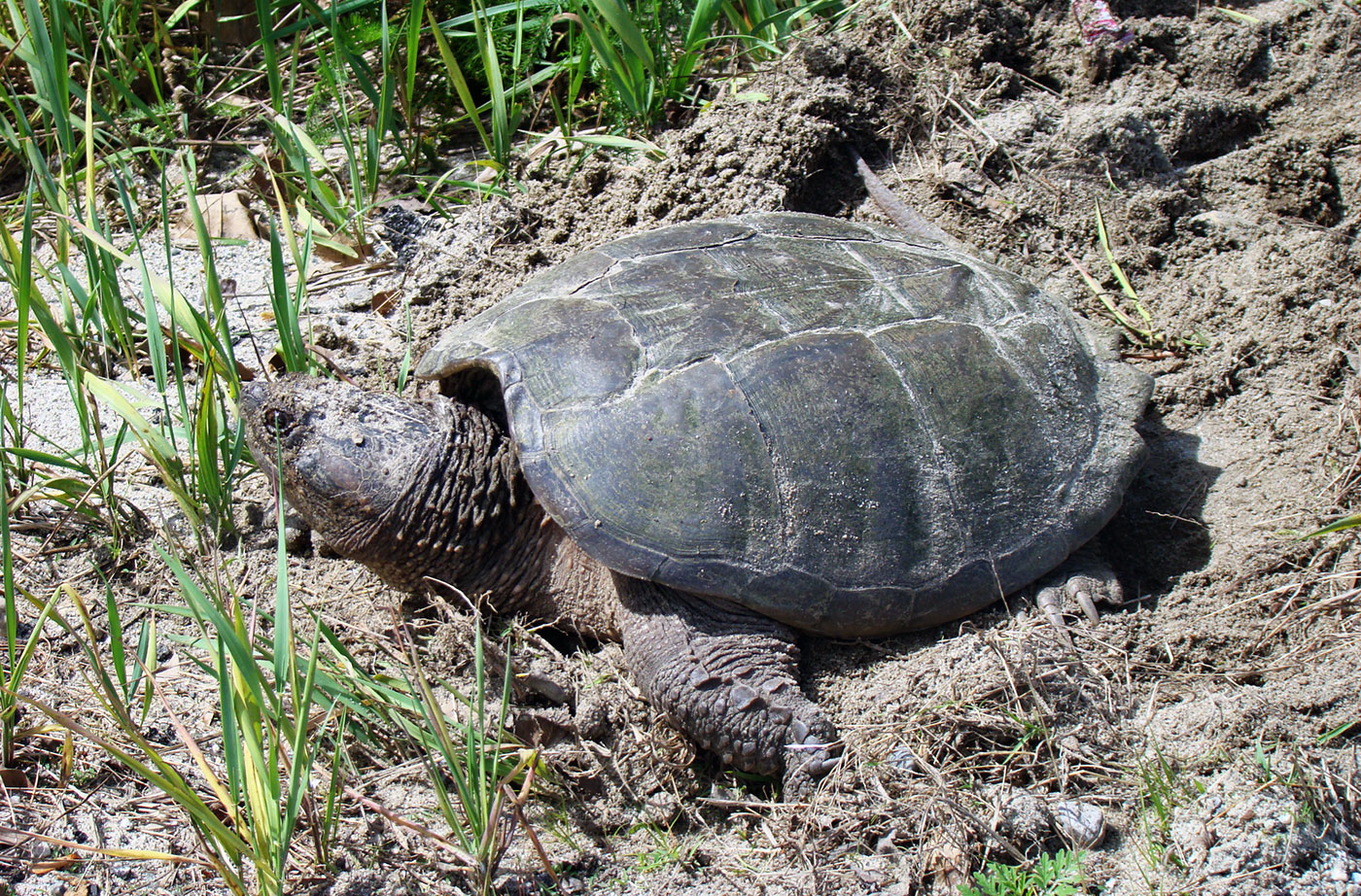 Snapping turtle in Topsham near the Muddy River. Photo by Beth Comeau

And the very young (and very old) can see them, because snappers are common residents of the southern and central Maine coast and river valleys. They can be found in shallow marshes, weedy lakeshores, slow-moving waters, and even some estuaries like Merrymeeting Bay. Juveniles prefer shallow streams with lots of reeds, rushes, and submerged plants for food. Many a Maine lake has its resident snapping turtle. Many a resident snapping turtle has a favorite rock for basking in the sun, which they do to warm up, increase metabolism, and store energy (fat) for the winter. They sleep at night and hibernate buried in the mud, beneath the ice.

Females can also be loyal to their nesting sites, returning year after year to the same patch of gravel or loose stream bank, sometimes miles away, in early June. The sandy sides of roads are also a popular nesting spot. Afterwards, she may wander for a while and choose a new territory, and in this way spread the population.

Most of the eggs will be quickly lost to predators such as raccoons, skunks, foxes, and mink. The rest will hatch in late August or early September. “The hatchlings will dig out of the nest and will somehow head straight for the nearest water, even if they cannot see it,” according to The Tortoise Trust.

Snapping turtle bones, preserved in the ashes of ancient fires, are evidence that ancestors of the Wabanaki people consumed turtles, which are still important part of today’s cultural sustenance diet. Snapping turtle meat forms the basis of “turtle soup,” including, at one time, Campbell’s brand. Hunting and trapping snapping turtle for personal use is permitted by Maine law. However, because snapping turtles live a long time and are relatively high on the food chain (they eat fish and birds), they tend to be contaminated with mercury and other toxic chemicals. They seem to tolerate pollution more than other species and can be found in degraded habitats. The snapping turtle is a survivor.

Who knows? As long as there is water, and mud for burying and sand for egg-laying, the snapping turtle may live for another 40 million years.

Science writer Catherine Schmitt now writes for Schoodic Institute at Acadia National Park. She has written many Creature Features for the Natural Resources Council of Maine. For more of her writings, visit her website at catherineschmitt.com.