Cool Fact: Maine’s otters spend most of their time in water less than 10 feet deep, where they find their preferred prey of fish, crayfish, crabs. 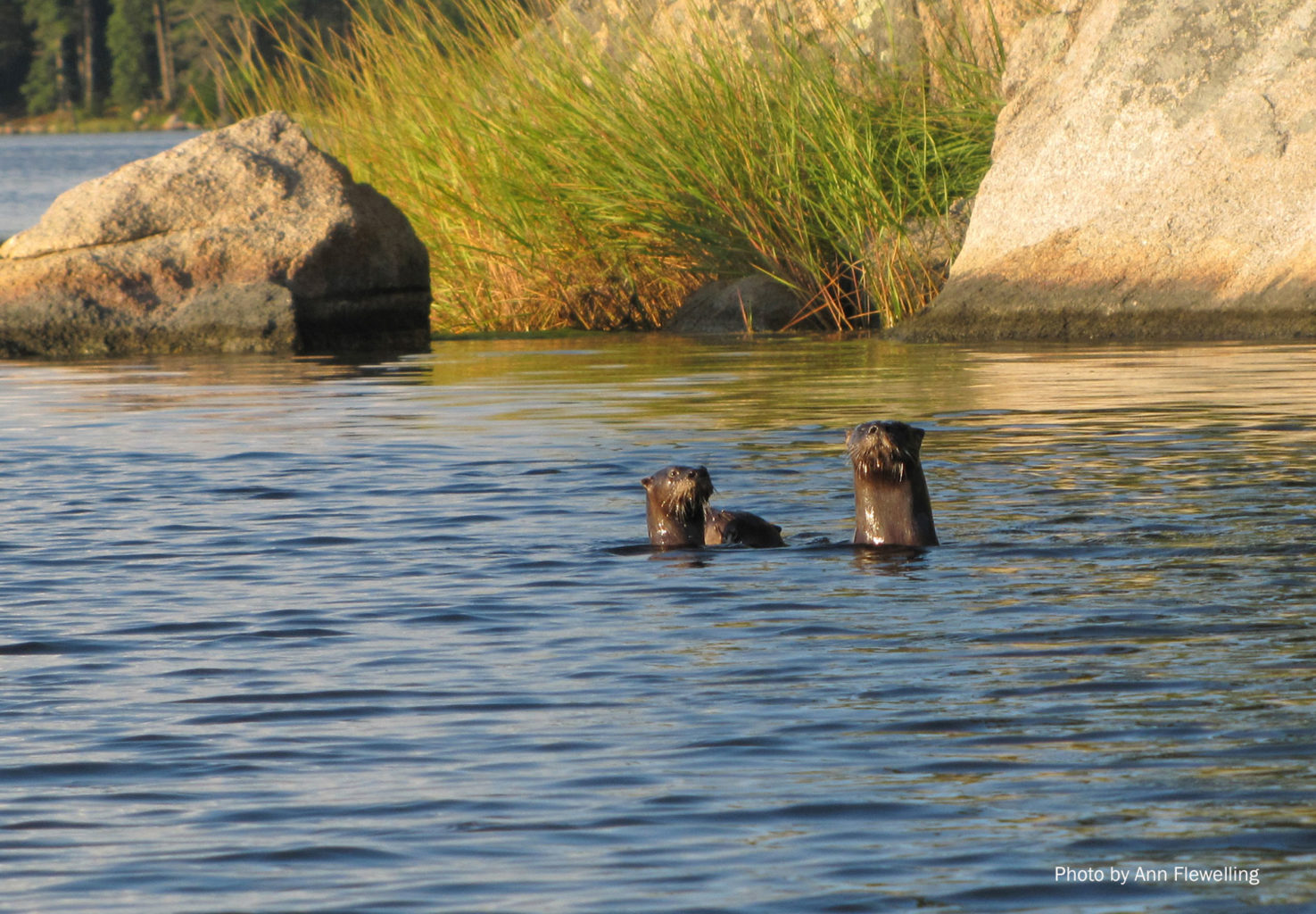 To encounter a river otter in the wild is to know joy. How could it be otherwise? “Otters are highly intelligent; their inclination to make a ‘game’ out of almost any activity is almost legendary,” wrote Maine Inland Fisheries & Wildlife biologist John Hunt.

Imagine a mother with two pups, swimming in the river at high tide. Seeing a human, she snorts, splashes, dives; the young ones follow. They surface nearby, look again, snort, splash, dive—otters can stay underwater for up to two minutes. They surface again, a bit farther away. Their deep brown fur turns silver in the water; their webbed feet and streamlined bodies help them navigate the current with ease—more than ease, delight. They seem curious, more bothered than threatened by the stranger in their midst. With their small eyes adapted to hunting in dark water, they are somewhat nearsighted. They sniff and snort.

The river otter likes rivers, of course, but also lakes and beaver flowages and coastal waters, aquatic environments with diverse shoreline vegetation. Otters are active in all seasons, using ice-free waters where available during winter. They spend most of their time in water less than 10 feet deep, where they find their preferred prey of fish, crayfish, crabs. They like to eat in the morning. In the afternoon, they might rest in a beaver den or hollow log, sliding into the water as the sun slips low. They have been known to inhabit old boathouses and duck blinds, the cool shadows beneath waterfront piers and docks, and the rock piles under bridges. Mostly, they are on the move.

The mother gives birth to pups, usually between two and four, in May or June. The offspring stay with her for a year, learning how to swim and other life skills. The male returns to his solitary life, wandering farther afield. Otter are an important animal in Wabanaki culture, appearing as tricksters in stories and representing family clans.

In their last river otter assessment (in 1986), Maine Department of Inland Fisheries & Wildlife estimated a statewide population of 19,000-24,000 otters. It is illegal to shoot them but legal to trap them (for their thick, durable fur). They live throughout the state and much of North America, but not where humans are densely populated or where the water is polluted.

While the species has rebounded with the Clean Water Act and improved river management, otter certainly were once more abundant than they are today. In some areas, mercury and other toxic contaminants are a problem for otters. David Yates of the Biodiversity Research Institute studied mercury levels in Maine otters, and found higher levels compared to other parts of the country, even in relatively remote locations such as Flagstaff Lake. “We’re not sure why,” he said. “It depends on where they are in the watershed, but lots of factors affect production of biologically available mercury [methylmercury] and exposure.”

Yates also fitted eight otters with transmitters, and tracked their movements over the course of a year. One male traveled more than 30 miles, over a mountain in the winter. “The otter is an interesting creature that we don’t get to see a whole lot, but working with them, I got to sit there and just watch them. What hunters they are! They get whatever fish they want, with agility and grace.” Yates recalled a memory from when he was 10 years old, in Alaska, watching an otter catch fish after fish after fish. He credits the experience with helping to motivate him to pursue a career wildlife biology.

To know the joy of river otters, pay attention to the shoreline. Look for tracks in the mud—five pointed toes around a small heel pad, three inches wide and three to four inches long. Look for trails leading to slides, one-foot wide, smoothed-down strips where otters slip and slide into the water. Sit on a high place, or in a canoe away from the shore, or tread lightly on a streamside trail. Be quiet, and watch.

I noticed these otter tracks as we drove into our camp on Dyer Long Pond late in the afternoon, at the top of the hill, maybe 300-400 feet uphill from the frozen lake. Got side-tracked when we got down to the house because both birdfeeder poles had been bent 90-degrees to the ground (bear? no one seems to have any other ideas on that! and snow had covered any tracks near the feeders). So we got busy fixing the poles. Finally, the next morning I walked up the hill to investigate the tracks, which looked a little like a mini-snowmobile had run through our garden. The tracks went through the garden, over the raised beds, across the driveway, past  the garage, and off into the woods.  The photo is where the tracks disappeared into the woods. I never did see the otters. 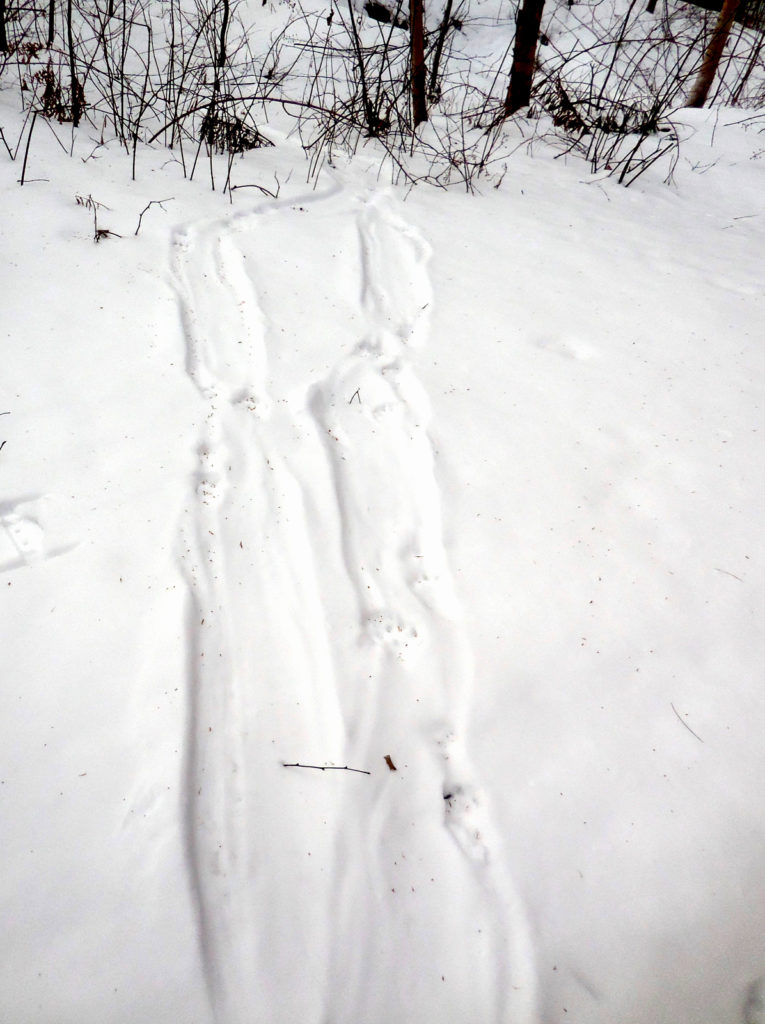 However, I have occasionally seen them while out in the kayak, usually in early spring or late fall.  This photo was taken in November 2014. 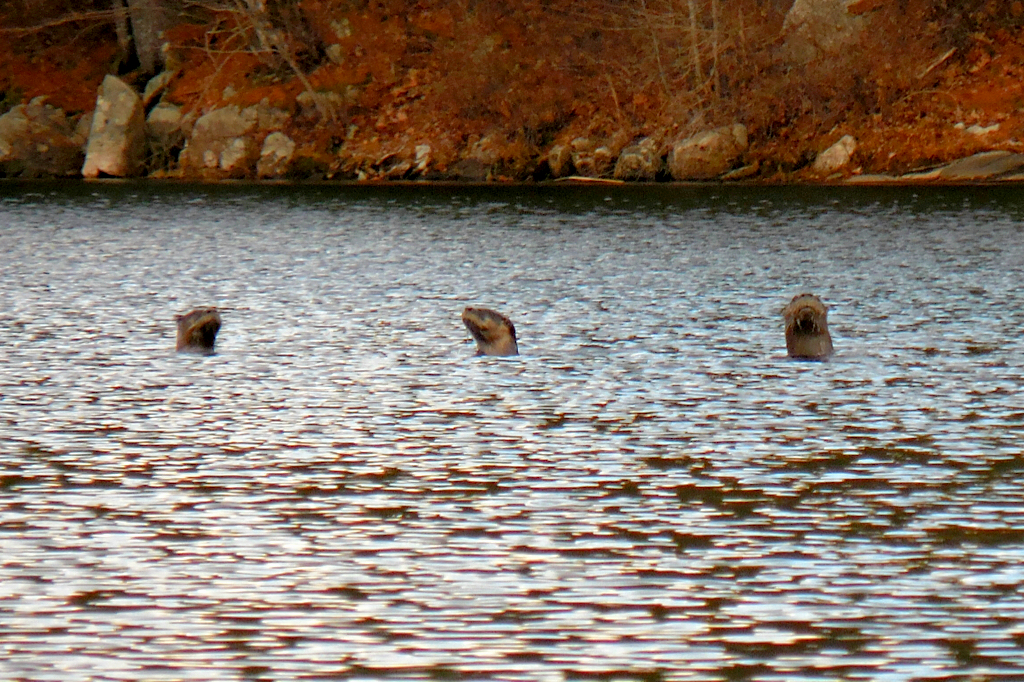