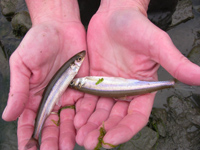 Cool Fact: Smelt have been fished commercially since the 19th century, with most being landed in Maine waters.

One of the great rites of winter in Maine is renting a shack in a smelt camp on the Kennebec River and fishing for smelt through the ice. Warmed by the wood stove and whatever you’ve brought along to sustain you through the midnight turn of the tide, you bait and drop the lines into the icy depths and anticipate the jig. The best part about smelt fishing is that smelt are good to eat. Striped bass, cod, salmon, trout, bluefish, seals, and birds eat smelt; you can, too. Get them fresh—they will smell faintly like cucumber or watermelon—and pan-fry them whole for breakfast.

Mainers are well aware of this long-standing tradition, including the delicious taste of fried smelt. But fewer are familiar with their fascinating natural history and the challenges they face due to climate change and other factors.

At six to eight inches long, rainbow smelt (Osmerus mordax) are the smallest of Maine’s native sea-run fish. They travel in schools in coastal waters, and migrate into estuaries in late fall and early winter. Come spring, the smelt will chase the thaw upstream to spawn in rocky stretches just above the head of tide. Look for their eggs—small, white dots—coating streambed rocks and plants.

The range of rainbow smelt at one time extended from Labrador to Chesapeake Bay, but now their southern limit appears to be Buzzards Bay. Climate change is said to be the main reason for this shift.

Smelt have been fished commercially since the nineteenth century; harvest peaked in 1966 at 360,000 pounds, with the majority being landed from Maine waters. Recreational anglers also have noted declining catches over the last three decades. Based on these observations, the federal government listed rainbow smelt as a Species of Concern in 2004. Since then, the Maine Department of Marine Resources has been working with the Massachusetts Division of Marine Fisheries and New Hampshire Fish and Game Department to document the status of smelt in the region. In their conservation plan released in December 2012, the study team reported that most of the 279 streams they surveyed either supported smaller smelt runs than they did historically or no longer support spawning. They found fewer older fish, fish spawning at younger ages, more males than females, and lower survival rates—all indications that “Gulf of Maine rainbow smelt populations are currently stressed.”

What could stress a smelt, a fish so streamlined and silver, so in sync with its environment? Dams and culverts, and extremely high flows or low flows, can prevent smelt from reaching freshwater spawning sites. Those fish that reach spawning grounds may find polluted water: acidic, turbid, nutrient-rich waters are inhospitable to smelt eggs and juveniles.

Spawning declines were noted in southern Maine, lower Casco Bay, the Kennebec River, and the east side of Frenchman’s Bay. Yet, as is the case with populations of other sea-run fish, Maine still has relatively healthy runs (in northern Casco Bay, the Medomak, St. George, and Penobscot Rivers, and around Cobscook Bay), some of which support commercial fisheries (for example, in the Pleasant River in Downeast Maine) and recreational fisheries.