Cool Fact: In Wabanaki stories, the raccoon tries to sing louder than the river!

The raccoon is indigenous to North and Central America, a cousin of weasels, otters, skunks, badgers, and (distantly) bears. The name “raccoon” is also indigenous, from the tribes of the Northeast, who knew the animals well: their fur, their meat, and their fat, a treat mixed with maple sap and kept in bark vessels.

English colonists adopted the name, not so much to refer to the animal but to its skin and fur, which adorned the bodies and bedrooms of the Algonquian-speaking people and became a commodity with other furs.

Then, as now, people encountered raccoons wherever they lived: in stands of hardwoods, the edges of farms, all along the coast, near rivers and streams, in swamps. The only place they don’t live is in the dense spruces and firs of the northern boreal forest, and the high peaks of the Rocky Mountains.

Raccoons are usually nocturnal, coming out of their dens in hollows and trees after dusk to feed along the water’s edge, in the corn fields, in any garbage bin that is not locked tight. They occasionally look for food during the day.

According to the Department of Inland Fisheries and Wildlife, which last assessed the statewide raccoon population in 1996, raccoons can adapt to a wide variety of habitats and food sources, which enables them to thrive in the developed environment. Part of this adaptability is their high reproductive capacity. They breed in February and young are born in April, raised by the female. At two to three months old, young raccoons first leave the den to follow their mother, crying and cooing, while she forages at night. By October they venture on their own before reuniting with mom to hole up for cold winter months. They live two or three years.

Raccoons are omnivorous, eating wild and cultivated fruits, nuts, grains, buds and grasses. They eat rodents, insects, birds, reptiles, fish, frogs, crayfish, and mussels. They use their front paws, with five long, sensitive toes to grab and claw at prey. Children’s stories often tell of raccoons washing their food before they eat it—really they are just handling it, perhaps moistening it in water. They do love water. But those stories, and the fact that raccoons seem like a cartoon character come to life, endear humans to them. Raccoons are familiar—one of the first animals that children learn to identify and a regular presence in backyards. Some people keep them as pets, and make videos of them doing cute things like sitting on couches, playing with bubbles, turning on the faucet, eating grapes.

But raccoons are not cartoons or pets, they are wild animals. They carry rabies and parasites. They scratch and bite. They are strong, even when young. All of these characteristics cause problems when humans and raccoons find each other in close proximity.

Raccoons’ nocturnal wanderings set the dogs to barking. Like bandits, they dig up the garden and devour all the bird seed. Their dumpster-diving habits have earned them the nickname “trash panda.” They strangle chickens and rip off their heads. They are smart and vicious. They thrive in the presence of humans, and are blamed for their cleverness.

Raccoon, with that black face mask and striped bushy tail and hunched way of walking (because his hind legs are longer than the front) is a trickster figure in Wabanaki stories. Raccoon teases bear, taunts minks, tries to sing louder than the river. Raccoon is always meddling with something.

Raccoon can also be a verb – as in, to walk about at night. But perhaps these days to raccoon could also mean to adapt, smart and vicious, surviving.

Creature Feature by Catherine Schmitt, a science writer based in Bangor. Her most recent book is Historic Acadia National Park. 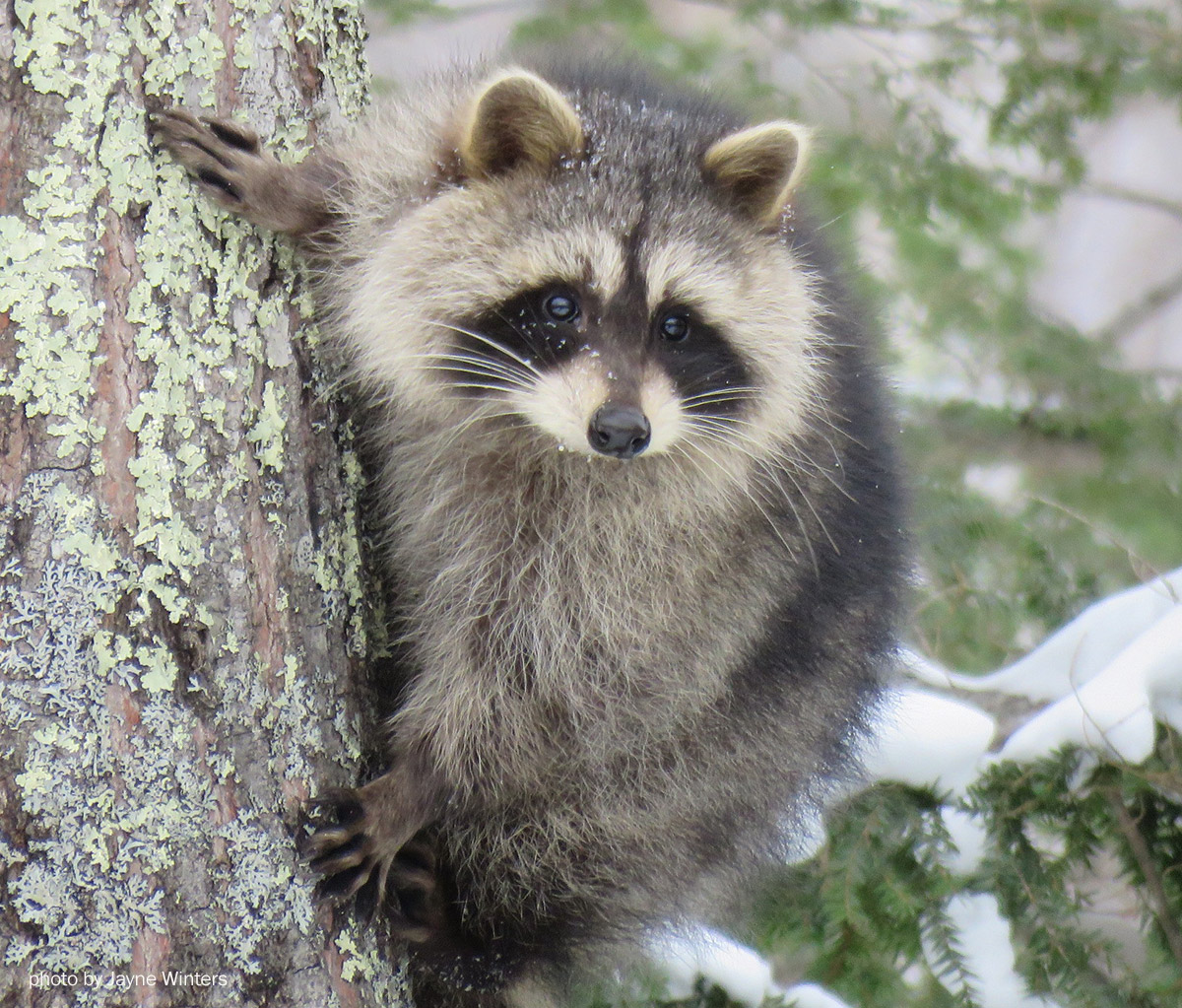