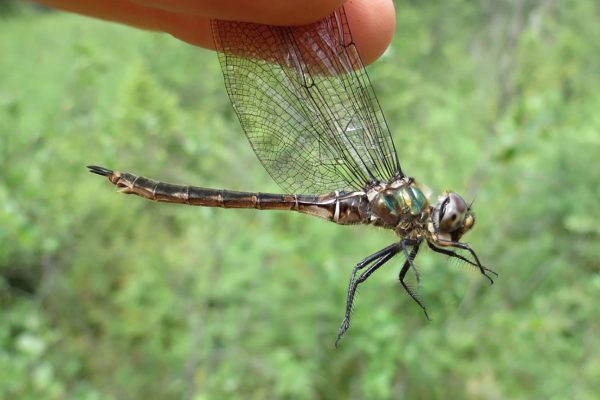 To find the Quebec emerald, wait for the last week of June. From then until about the middle of August, go north of Moose River and west of Moosehead Lake, in Somerset County, Maine, where sphagnum moss grows.

Go past the cedars and jack pines (but take a moment to appreciate the rare occurrence of jack pine so far inland).

Keep going to where water emerges from the ground and flows across land that slopes just enough to move the water but not enough to form any kind of channel. Go where the water trickles over an ancient lakebed, flowing eventually toward a dark, boggy pond somewhere in the distance. Cross the strands of sedges and leatherleaf shrubs rooted in peat, to the parallel, water-filled hollows of rushes and brilliant green moss. Look in those hollows—the low spots ecologists call “flarks.”

Dragonfly larvae that have overwintered will be hatching there, in Number Five Bog, one of only ten peatlands characterized as wave-patterned fens, for the groundwater flow that enriches the peat with minerals, and the string-and-flark ribbing that is most obvious when viewed from above.

But the Quebec emerald must be known from the water-soaked earth. Its body is shiny black and metallic green (as in the first part of its name, Somatochlora), as well as somewhat iridescent and hairy. It has giant green eyes and clear wings with black lacing. Short, white markings partially ring the abdomen, lending the species the second part of its scientific name, brevicincta, and linking it to other striped dragonflies.

The Quebec emerald can be found in Number Five Bog because this wetland is a protected place. In 1984, the Number Five Bog was designated a National Natural Landmark, because of the fen (“the only large, intermontane peatland in the Northeastern United States”) and the adjacent stand of jack pine. In 2000, Number Five Bog gained further protection and notoriety when it became part of a statewide system of ecological reserves created by the Maine Legislature to conserve the state’s diversity of plants and animals, and examples of all the habitat types found in Maine.

The plants and wildlife in the wetland are protected from activities that elsewhere threaten the species, such as logging, harvesting of peatmoss and fuel peat, cranberry farming, and water withdrawals.

The State of Maine considers Quebec emerald a Priority 2 Species of Greatest Conservation Need, ranked as highly vulnerable because of its habitat requirements and boreal character. How will warming temperatures and possibly more frequent droughts affect the Quebec emerald?

Northwestern Maine is the edge of the Quebec emerald’s subarctic range, which includes Quebec and New Brunswick, Canada. A 2006 assessment determined that it is more widespread than previously thought, as it has been found into the Maritime Provinces. Somatochlora brevicincta lives in other places where patterned fens occur—Minnesota, British Columbia—but not in between.

Still, Quebec emerald is rare because its chosen habitat is rare, and rarely encountered. There are only 66 observations of this species in the community science database iNaturalist.

Those who want to find the Quebec emerald know where to look, and when. The dragonflies take flight in summer and can travel several miles, perhaps following sodden game trails through the peat, or flooded tire tracks along woods roads, or the wind shadows along the bog’s sheltered edge.

Most, however, will not pursue the Quebec emerald, and it’s probably better that way.

It’s enough to know that somewhere in northern Maine, where the sphagnum moss grows thick and soft, pools of cold groundwater reflect the rays of the setting sun, and the flash of flying emeralds.

Catherine Schmitt is the author of The President’s Salmon: Restoring the King of Fish and its Home Waters. Find more of her work at catherineschmitt.com.