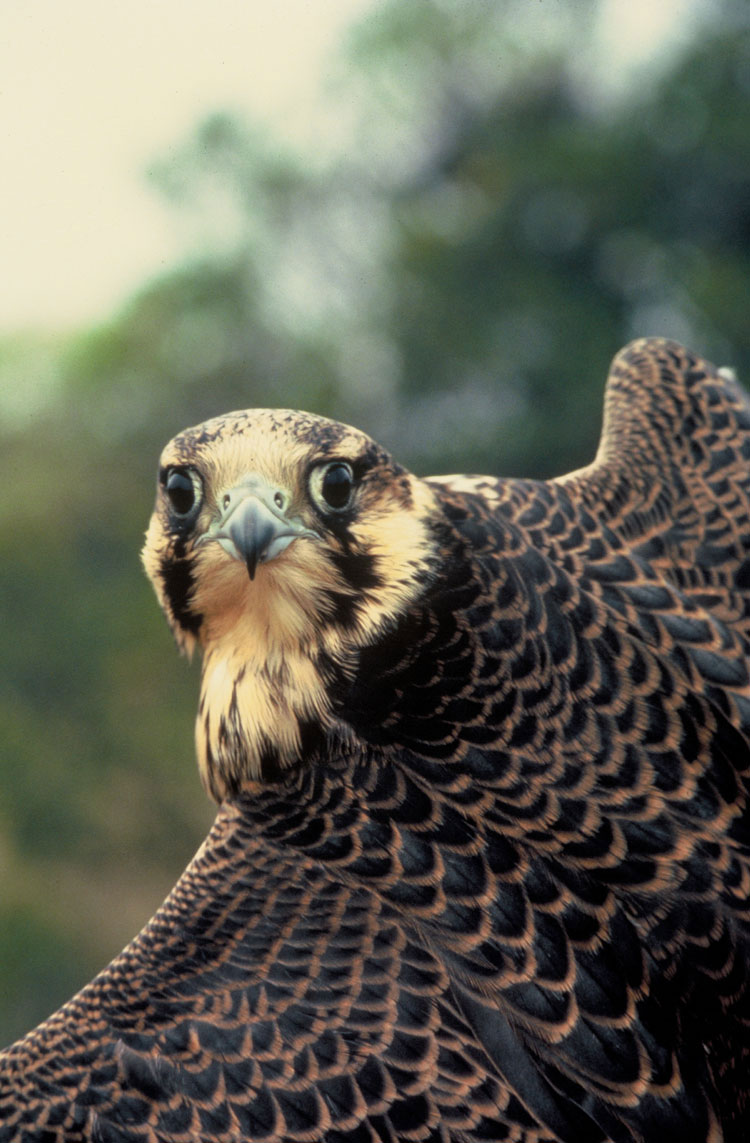 Photo by US Fish & Wildlife Service

COOL FACT: The Peregrine Falcon is the fastest flying bird on the planet and can reach 200 miles per hour in its hunting dive, called a “stoop.”

You don’t have to be hard-core birder to know about falcons. These fast-moving hunters of the sky capture the imagination of birders and the uninitiated alike.

Falco is Latin for falcon, from the Latin falx, a farm tool with curved blade; peregrinus, is Latin for “wanderer,” for the bird’s migratory nature. Peregrines not only wander but do so at amazing speeds. The Peregrine Falcon is the fastest flying bird on the planet and can reach 200 miles per hour in its hunting dive, called a “stoop.” The stoop is a dive the bird makes after first flying to a great height, then, with wings folded tightly against its body to form a streamlined  bullet shape, the bird “dives,” aiming for its prey—while the prey is still in  flight, giving the falcon the advantage.

Despite its speed, up to 50 percent of the falcon’s attempts at catching prey end in failure. When successful, the falcon uses its talons to stun its prey. Once the prey falls to the ground, the falcon bites the back of the prey’s skull with its hooked bill, breaking its neck. The bird may eat the food immediately or cache it for later consumption.

The peregrine, once known as the “duck hawk,” is a large falcon, the male more than 16 inches tall and the larger female measuring up to about 20 inches, with a wingspan of up to 44 inches. One of the most widespread birds in the world, the peregrine is found on all continents, with the exception of Antarctica.

Adult peregrines have a dark head that appears to be black capped or “helmeted,” a black moustache and a pale throat, with a barred belly. The upper parts are blue-gray, with long, pointed wings that have black and white barring underneath, which appear dark in flight. The long, thin tail has gray and white bands. The legs and feet are yellow.

Peregrines prefer the tundra and coastlines with cliffs, as well as urban areas for the tall buildings and bridges on which they will nest. They frequently opt for a nesting site that resembles what they were raised in—some aeries have been used for hundreds of years. Courtship behavior includes high circling and sitting on  high perches. Now is the time of year females will lay up to five eggs—mid-March to mid-April.

For about 20 years, in the middle of the last century, peregrine populations plummeted because of DDT poisoning—the eastern population essentially extirpated—and the  species was added to the Endangered Species List. In 1999, thanks to the work begun in 1970 by Tom Cade and The Peregrine Fund, the World Center for Birds of Prey, Peregrine Falcons recovered enough to be removed from the Endangered Species List.