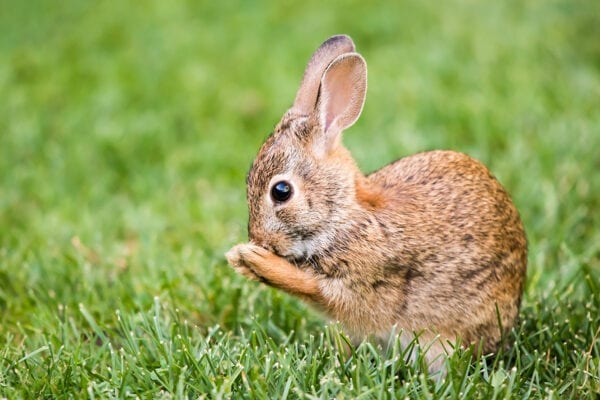 The State of Maine considers the New England cottontail rabbit endangered, and the primary reason is a decline in its habitat: large areas of young forest and shrubs, landscapes of new growth once created by wildfires, beavers, and abandoned farmland. In the dense tangles of briar, bramble, brush, and branch, New England cottontail rabbits found a home, a place where they could hide from predators during the day and hop around at dusk and dawn, browsing on goldenrod, plantain, chickweed, sheep sorrel, buttercup, smartweed, wild strawberry, cinquefoil, and violet. In fall they chewed on blackberry and raspberry canes, blueberry and willow branches, holly, dogwood, rose, sumac, birch and aspen.

But now New England forests are older, and our approach to managing land suppresses wildfires and prevents beavers from flooding real estate. In an interview on necottontail.com, Maine Department of Inland Fisheries & Wildlife biologist Wally Jakubas said, “New England cottontails are in trouble because there are few areas that they can live in anymore. These rabbits prefer to live in old fields that have thick brush, with lots of places to hide. Most of the old fields in New England have either grown up into forests, or have been developed for houses or businesses…The old fields that are left are often very small and are separated by roads and buildings from other old fields. These roads and buildings make it very dangerous or impossible for rabbits to move from one field to another.”

There also are fewer rabbits now because there are more coyotes, foxes, house cats, owls, and hawks. I like seeing owls and hawks, coyotes and foxes. But I like seeing rabbits, too. Rabbits once made a nest in the front lawn of the house where I grew up in New Jersey, but my memory goes dark when I try to remember what happened to the warm, soft babies. Later, I shared the edge of a salt marsh on the Chesapeake Bay with numerous rabbits. They scattered with the quail as my car crept up and down the long gravel driveway; they lounged in the yard beneath the fig trees.

Telling the difference between the New England and Eastern cottontails is not easy. Both are small brown rabbits. Assuming you are near one of the five areas where the New England rabbit still lives, you might note that the New England cottontail is smaller; a rabbit larger than 17 inches or about two pounds is likely an Eastern bunny. The New England cottontail has a small black spot on its forehead and black fur along the outer edge of its ears. The Eastern rabbit has larger eyes—because it evolved in more open areas and needed to see across longer distances than the forest-dwelling New England rabbit. Because of this sharper vision, Easterns can survive here better now, as the landscape has been fragmented into smaller and more open patches of habitat.

Wildlife biologists believe the best way to help the rabbit is to create more of its preferred habitat, so multiple agencies, conservation groups, and volunteers work to maintain and increase cottontail habitat by mimicking natural disturbances that prevented forests from maturing.

We forget that the landscape changed before we changed the landscape, and plants and animals like the New England cottontail, American woodcock, brown thrasher, and the wood turtle adapted to the changes unique to this place, and can’t live anywhere else.