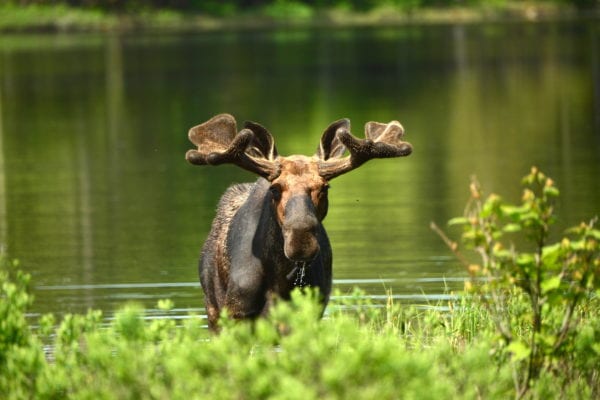 COOL FACT: A bull moose’s antlers, which begin their annual rapid growth in spring, measure up to 6 feet from tip to tip and can weigh up to 100 pounds, including the skull.

Few things thrill Mainers and visitors more than spotting a moose! Their massive size and dramatic antlers (males only!) peering through the woods leave a lasting impression.

The moose is the largest of the deer family, with adult males reaching up to 10 feet (about 7 feet at the shoulder)  and 1,400 pounds. Females are about three-fourths the size of the males. Adults may forage an area up to 10 miles and eat as much as 35 pounds of vegetation in one day.

A bull moose’s antlers may be used as weapons to attack a competing bull moose. Once one of the two in conflict is down, he can expect to have his opponent’s antlers thrust into his side, piercing a lung, heart, or other vital organ. By August, the male’s antlers are fully developed and the velvet is dry and flaky. They will scrape their antlers on trees or shrubs until the antlers fall off, leaving behind a scent to alert other moose of their presence, and a clue about  the quality of their health.

Early September to the end of  October, the rut season for deer, moose watchers should be particularly careful around these huge animals. When the female responds to a male’s “mating roar,” which can be heard some three miles away, the bull will charge through the forest in a blind rush to reach his potential mate. Once paired, the bull will  remain with the cow for as long as 12 days before he moves on in search of another cow.

Come spring, the cow will deliver one, sometimes two, and rarely three calves. At birth, calves weigh up to 35 pounds; they can gain up to two pounds a day during their first month. The cow moose will raise her offspring on her own, keeping the calf with her for one year, up until about two weeks before she births another, at which time she drives off the yearling to find its own way, completing the circle.