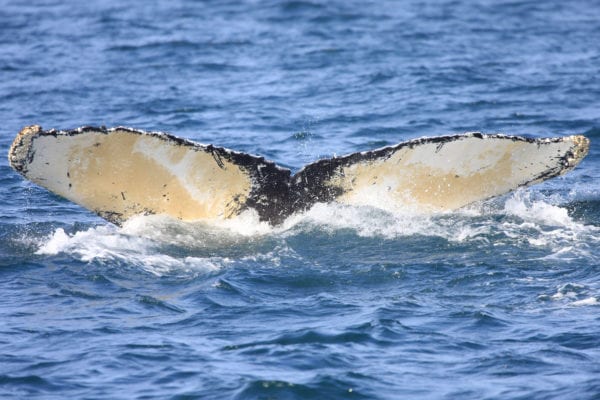 COOL FACT: A humpback whale’s flukes, or tail, are scalloped such that each whale has distinct markings, the way humans have distinct fingerprints, making it possible for researchers to distinguish between them as they study these mammals.

Each year in Maine, thousands of people take whale watch cruises off the coast in hopes seeing humpback whales! Sometimes playful, and the most active of all the whales, the humpback whale is the only species to breach—or leap in the air—completely leaving the water, before rolling over and crashing back down into the water, where it may slap its tail.

Humpbacks, blackish above and white below, can grow to about 60 feet in length and can weigh up to 45 tons! The average humpback is 50 feet and about 35 tons. Its throat is marked from the tip of the jaw down to the area of its belly by as many as 40 pleats. Along the whale’s head and throat, bumps sporting a bristle on each are thought to allow the whales to detect nearby movement in the water.

The humpback’s extremely long flippers are white with scalloped edging and measure about one-third of the whale’s body length. The  flukes, or tail, are also scalloped, and each whale has distinct markings, the way humans have distinct fingerprints, making it possible for researchers to distinguish between them as they study these mammals.

Humpbacks mate in winter or early spring. About 10 months later, in March, usually along the tropical coastline, a female will deliver a calf measuring up to 15 feet in length and weighing up to 4,000 pounds. The calf will remain with its mother for the first year of life.

Humpbacks travel mostly alone or in small pods and feed on crustaceans along the water’s surface. They may be found in the Atlantic and Pacific oceans from the Arctic to Antarctic regions. In the Atlantic, they winter in the Caribbean region and summer along the New England coast, making them the key target species on whale watches out of this area from May through November.