Cool fact: Gray squirrels will hide food all over the neighborhood, each time taking note of surrounding landmarks and use spatial memory and smell to recover buried food.

This is harvest season, a time to prepare for the long winter ahead. In the city and in the country, gray squirrels are busy taking advantage of autumn’s abundance, putting up acorns and other food items they will need during the cold months when food is scarce. 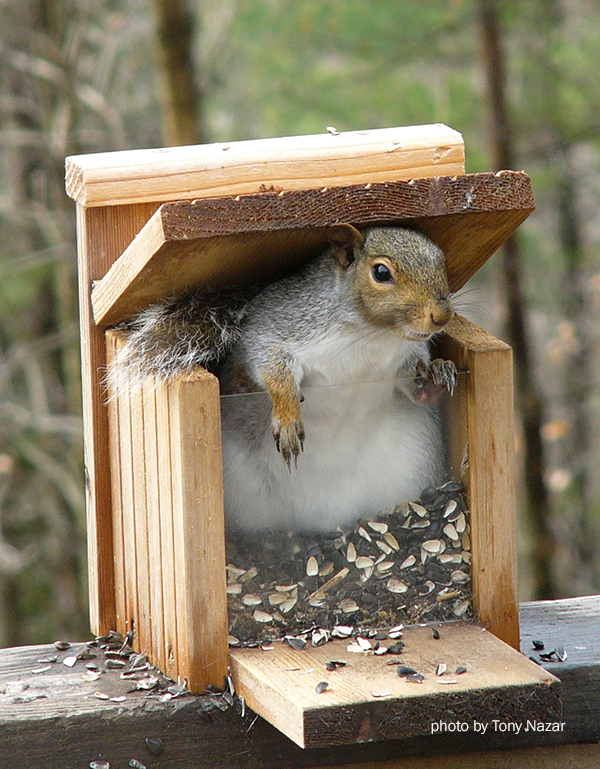 They eat a variety of foods: seeds, nuts, leaves, bulbs, roots, bark, mushrooms, insects, worms, eggs, small birds, even other small animals. They will eat tomatoes and strawberries out of the garden. They will eat the food you put out for the birds; if to distract the squirrels you also put out peanuts, they will take the peanuts and bring them to the neighbor’s yard, dig a shallow hole in the perennial bed, and stash the peanut for later. They will hide food all over the neighborhood, each time taking note of surrounding landmarks. They might bury the food quickly and come back in an hour, a day, or a week, using spatial memory and a sharp sense of smell to recover and relocate the buried food. Other caches they will leave for months. A single squirrel will bury food in thousands of locations.

The scientific term for this behavior is “scatter hoarding.” It takes up the majority of their day. They will “pretend” to bury food if they think they are being watched. They will hide behind the hosta and ferns while digging, or carry their peanut up into a tree.

Those who dislike squirrels because of this behavior might consider this:

About 30 percent of what they hide will never be recovered, instead the nuts and seeds and cones stay buried and become trees. In this way, squirrels are responsible for forest regeneration.

Journalist Rick Bragg wrote that you can tell the character of a person by showing them a squirrel with a jaw full of nuts. “If they don’t smile, there is something bad wrong with them.”

The Eastern gray squirrel, Sciurus carolinensis, is native to eastern North America, from New Brunswick, Canada, to Florida and east Texas. They live in dense forests, especially those filled with oak and hickory trees, but they live just about everywhere and have adapted to city parks and suburban yards. One adaptation is in communication: in the woods they are more vocal but in noisy cities they rely more on visual signals like stamping their feet and twitching their tails. They have spread to other parts of the world where they are considered invasive.

Here, they are run over by cars and eaten by bobcats, raccoons, hawks and owls, foxes, weasels, cats and dogs. Hunters can take them from October to December (daily limit four). If predators are absent, genetic variation in the population might result in black or white coloring; otherwise they are gray as gray. Females and males look the same. Their distinguishing feature (aside from the aforementioned scatter-hoarding) is their tail, a soft plume at least as long as the body, a shadow rippling with each leap and bound.

They jump and run up trees, and climb back down head-first, tail streaming behind them. They build big leafy nests (a “drey”) in trees, easily seen when branches are bare.

Really, there is nothing common or ordinary about them. Henry David Thoreau noticed the work of squirrels along his walks. He envied their ability to keep their paws and whiskers clean when handling pine cones, which to him was the “stickiest work I ever did.” Thoreau noticed a lot of things. He paid attention.

Squirrels persisted in the landscape when so many other native species could not. All too often, the familiar and the common are ignored as focus turns to the unique, the rare, the vanishing: chestnuts, puffins, warblers, cottontails over gulls, robins, oaks, and squirrels. But what happens when the ubiquitous becomes scarce? If the gray squirrel were to stop surviving for some reason, would they be missed? Their chatter, their movement, gray streaks of life among the forest they themselves helped create? Perhaps we would miss their company. As Bragg wrote, “It is hard to be lonely with a yard full of gray squirrels.”

Catherine Schmitt is a science writer based in Bangor. Her most recent book is Historic Acadia National Park.