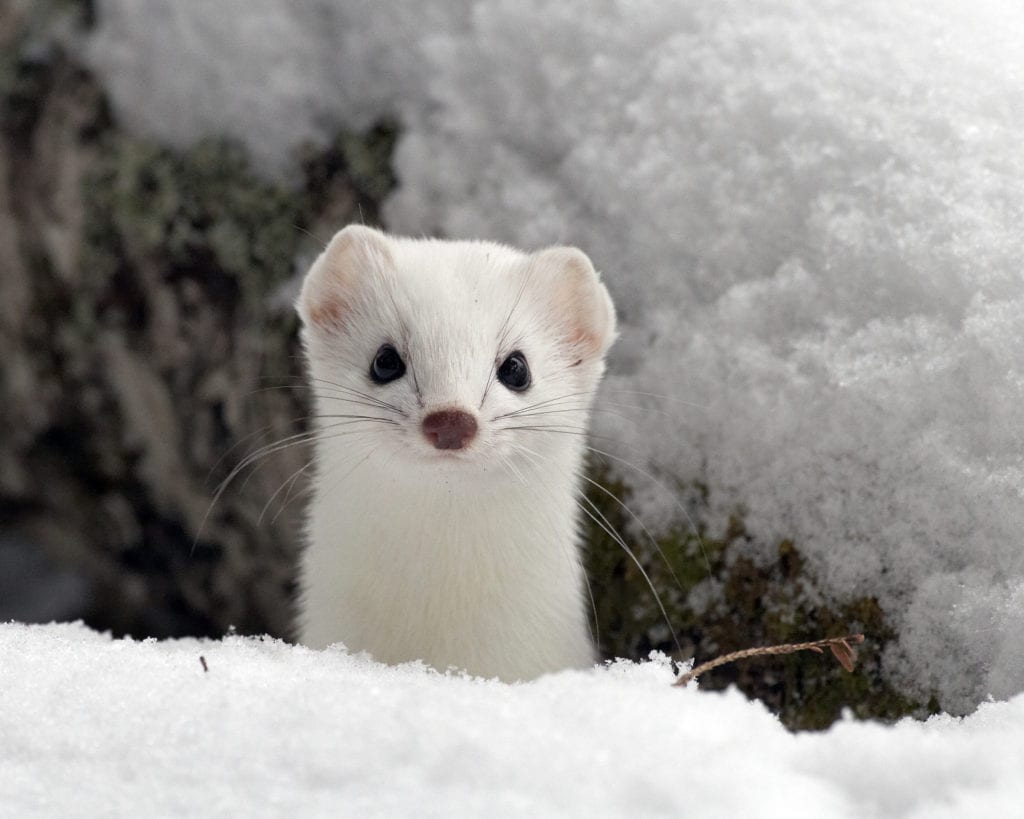 During other seasons, you might call it a stoat, or maybe the more scientific short-tailed weasel, this small mammal with rough brown fur, paler along its belly. But in winter, when its coat is brilliant white and its form distinguished only by its black eyes and black furry tip of the tail, you call it an ermine.

In so doing, you join cultures around the globe who have recognized the dense, short, silky, brilliant white fur (and its contrasting black) as something extraordinary. The ermine lives throughout the boreal forests of the northern hemisphere. To the monarchs of medieval Europe, the ermine’s white coat symbolized royalty and high status. This is the fur that adorns the cartoon version of a queen, her red cloak trimmed with thick, white fur. Spotless (except for the occasional black from the tail), undefiled, beautiful, pure.

Some (the Irish) thought ermines to be bad luck while others (Zoroastrians, Komi, Catholics) liked them because they killed rats and squirrels. And, of course, for that delicate white fur, which adorned the ceremonial headdresses of Tlingit and other Pacific Northwest tribes, the queen of England, the king of France, the official robes of judges, the waistbands of Wabanaki women. A not-to-scale ermine looks alertly from the arms of a young Cecilia Gallerani in Leonardo da Vinci’s 1480s painting, Lady with an Ermine.

The ermine, a member of the weasel family, lives in wooded or open country where thickets, rock piles, and other brush provide heavy cover and proximity to water. With a small head and legs, elongated neck and body, the ermine reaches a maximum length of just over one foot. Nimble and vicious, a hunting ermine will run back and forth, in and out, jumping and hopping in a sort of a dance to distract its prey. In his history of Maine, published in 1832, William Williamson described the ermine as “the sprightliest animal in nature.” Running and bounding, they can reach speeds of eight miles per hour. They can jump as high as six feet. They easily escape potential predators.

In a glass case in the American Museum of Natural History in New York City, an ermine hunts a vole. The title of the diorama is “August Morning, Baxter State Park, Maine.” The text on the wall reads, “In a heartbeat, this ermine will dart at an oblivious vole and dispatch it with a swift bite to the neck. If the vole were in its hole (foreground), the ermine would slink right in. These small, solitary carnivores can amass dozens of kills for eating later and even prey on rabbits. Ermines operate not out of bloodlust but hunger. Their long, lean, active bodies burn so many calories that they must stay fueled to survive.”

After dancing and killing a mouse/vole/shrew/rabbit, an ermine takes over its burrow, lining the chamber with its skin and underfur. There, tucked into a new nest and surrounded by the remains of the dead, the ermine sleeps. Males and females live separately, but not too far apart. They mate in summer and the female gives birth in spring.

Ermine are active at all seasons, preferring to hunt in daylight. Now, the days having grown short, the ermine has turned white. Perhaps you’ll see him, running across the frozen crust of snow, or poking his head up through the powder. Or maybe you only catch the tip of the tail against the field of snow, a pattern echoed in the heralds and classic decorative and royal geometric patterns of black and white.