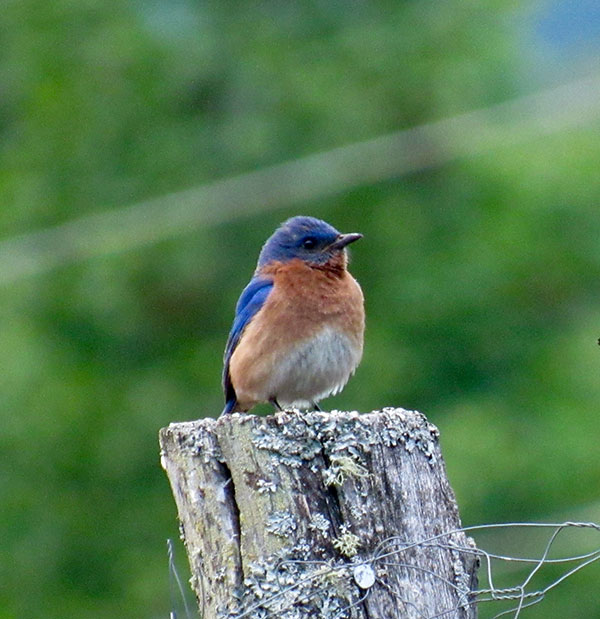 Cool fact: Bluebird houses aren’t just for nesting! Several bluebirds will roost together in a bird box for warmth in the winter.

Does any songbird elicit a smile more readily than a bluebird? “The bluebird of happiness” has long been a trope in our popular culture, and the belief that the bluebird is a positive omen of good luck and prosperity is widespread. Various Native traditions positively associate the bluebird with the sun, sky, and spring. Something about this bird just makes us happy.

Of the three species of bluebird in the United States, the Eastern Bluebird is the one we see here in Maine. And until relatively recently, the sighting of a bluebird was truly cause for joy because it was so infrequent. Bluebird populations had seriously declined, in part due to competition for nest sites with Eurasian Starlings and House Sparrows, both introduced species. The bluebird is a cavity nester, raising its young in tree cavities or appropriately-sized bird boxes. House Sparrows can live up to their designation as an invasive species quite literally, by aggressively ousting bluebirds from nest boxes.

Fortunately, conservation efforts in recent years have led to better stewardship of bluebird habitat and houses, as well as the development of more bluebird trails—sets of bluebird boxes (spaced at least 100 yards apart), because bluebirds prefer other bluebirds as neighbors. Since they usually raise more than one brood in a summer, enabling them to nest safely can make a big difference. Breeding Bird Surveys from 1966 through 2015 show that bluebird numbers have been on the upswing over the past few decades.

Bluebirds are easily identified even by those who may never have seen one. The male bluebird is the more vividly blue of the pair, with a more extensively ruddy breast, but the grayer female is also very striking in her own right. Henry David Thoreau famously wrote in his journal (on April 3, 1852): “The bluebird carries the sky on his back.” (A Massachusetts native, Thoreau was in fact referring to our Eastern Bluebird.) Although he meant to be poetic, he was onto something: a bluebird feather is not blue because of pigment, as is the case with most feathers, but because it is structured in such a way that it only reflects back the blue portion of the light spectrum. And we respond similarly to the deep blue shades of both a bluebird and the perfect sky of what we call a “bluebird day.”

The bluebird also sparks joy because its arrival has long been regarded as a hopeful sign of spring. As The Natural History of American Birds of Eastern and Central North America, by Edward Howe Forbush and John Richard May (first published in 1925) rhapsodizes: “Who does not welcome the beloved Bluebird and all that his coming implies? His cheery warble, heard at first as a mere wandering voice in the sky, heralds returning spring. There must be something wrong with the man who, hearing this brave and happy bird and seeing him fluttering and warbling in his lovely vernal dress, does not feel a responsive thrill.” 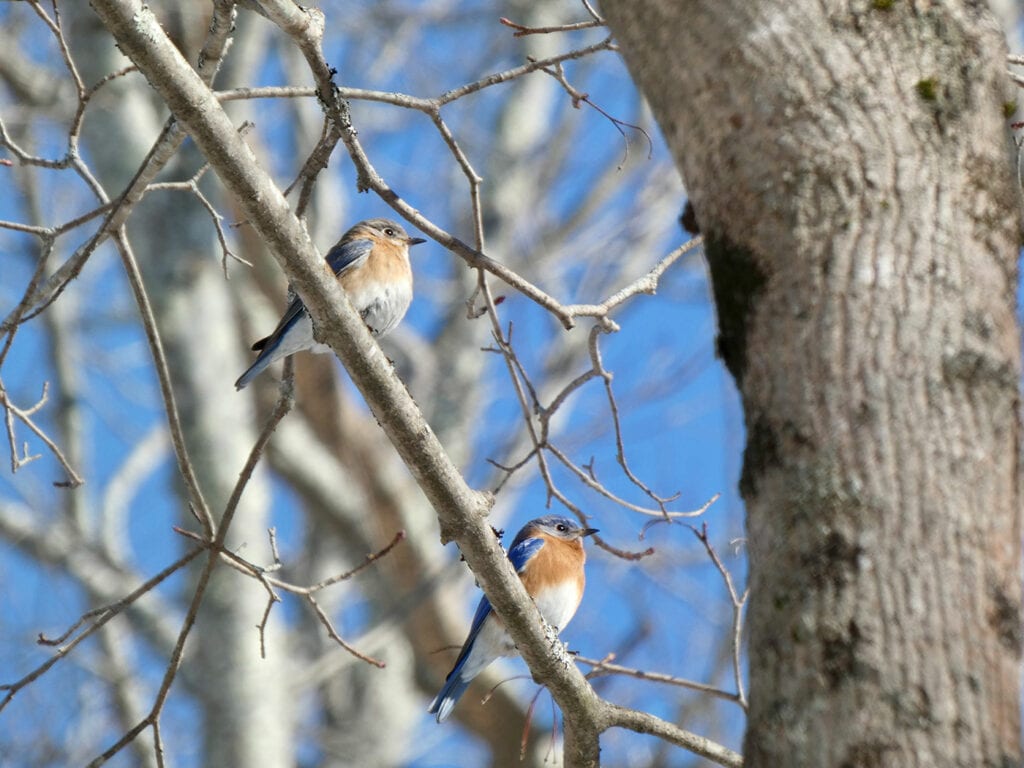 Traditionally, bluebirds start showing up in Maine in their “lovely vernal dress” around the first day of spring in March. However, Audubon Christmas Bird Count data and  anecdotal observations over the past twenty years suggest that more Eastern Bluebirds are lingering in Maine throughout the winter, at least in the southern half of the state. This seems to indicate that the bluebird’s range, along with the documented ranges of many other species, is slowly shifting northward, a trend due in large part to global climate change. We may delight to see the splashes of color they bring to our winter landscape, but these pioneering birds are also indicators that all is not right with our world.

While the bluebird’s summer diet consists of insects, in the winter it shifts to eating fruits, including sumac, viburnum berries, and rosehips. Nomadic flocks of bluebirds roam around in search of these food resources, sometimes in the company of American Robins, their cousins in the thrush family.

If you spot bluebirds in your yard and want them to stick around for a while, offer them dried mealworms. Bluebirds love this protein-rich winter sustenance. Well-placed bluebird boxes in the right habitat may serve as group roosts in the winter, and then hopefully attract nesting pairs come spring. Planting native berry bushes in your yard will also help to sustain foraging flocks through the long cold season—and to boost your spirits in the way that only this symbol of happiness can do.