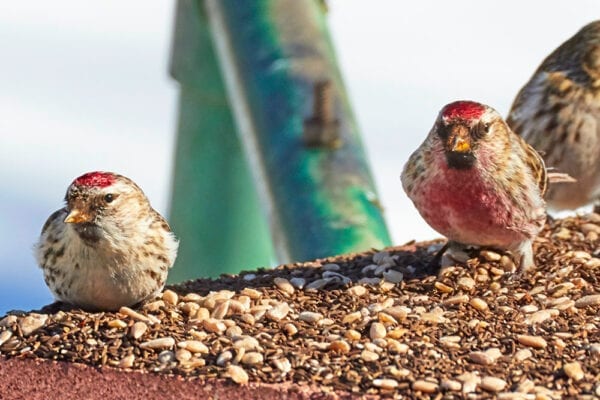 Cool fact: The Common Redpoll has a pouch in its throat that enables it to store food. Thanks to this adaptation, on a very cold day the bird can quickly collect seeds, then remain in a sheltered, warmer spot for several hours while it eats.

Many of our songbirds migrate south for the winter, leaving the Maine woods a quieter place. But some years, flocks of “winter finches,” including Common Redpolls, arrive with the first snows to fill the trees with song again.

The redpoll’s circumpolar breeding range extends well into the Arctic, where it nests in tundra scrub. During the darker, colder months, large flocks typically roam southward throughout Canada and into the northern states, including Maine. Their dispersal is erratic, and how far south they go depends on the availability of their preferred food, seeds from birch and alder catkins. In years when the pickings are slim, nomadic flocks of redpolls may irrupt as far south as the central states. They are not rare, but because redpolls can be so unpredictable in their winter appearances, it feels like a special occasion when they show up at our feeders.

Indeed, when a flock of redpolls gathers, their gregarious energy conveys a party atmosphere. Often in the company of Pine Siskins and American Goldfinches, these vocal birds easily liven up a snowy backyard with their incessant buzzy trills and their constant movement. Even in flight, they’re always chattering, always seeming to have a good time together.

John James Audubon, who collected the bird in Labrador, wrote in Birds of America: “Few birds exhibit a more affectionate disposition than the Little Redpoll, and it was pleasing to see several on a twig feeding each other by passing a seed from bill to bill, one individual sometimes receiving food from his two neighbours at the same time.”

Audubon also mentioned how easy it was to approach the “unsuspecting” birds. Some redpolls can in fact be surprisingly tame. Edward Howe Forbush, in his 1920s classic Birds of Massachusetts, tells of “a farmer near Patten, Maine, sitting on a snow drift about fifteen feet high, surrounded by about a hundred Redpolls. Some of them at times perched on his head and shoulders, and one sat on his knee for about a minute. The farmer said he had enjoyed the previous half-hour more than any other that he could remember and that any man who would kill one of these little birds ought to be sent to the ‘pen.’ The birds had been attracted by seed scattered on the snow in unloading hay.”

About the size of a chickadee, the Common Redpoll shares with our state bird the endearing traits of a round, puffy little body and beady black eyes. In coloring, however, the redpoll is more similar to another feeder bird, the House Finch, featuring a brown back, white wing bars, and white underparts with some brown streaking accented, on the male, by a variable pink wash down the breast. Both male and female sport dashing raspberry berets and black “soul patches” under their pert yellow bills, which make them look, scientifically speaking, very cute.

A similar species, the Hoary Redpoll, is slightly larger and whiter than the Common, with a smaller bill. A pale Common Redpoll can be virtually indistinguishable from a Hoary. Just to further complicate the matter, the two birds also sound alike and often flock together in the winter. 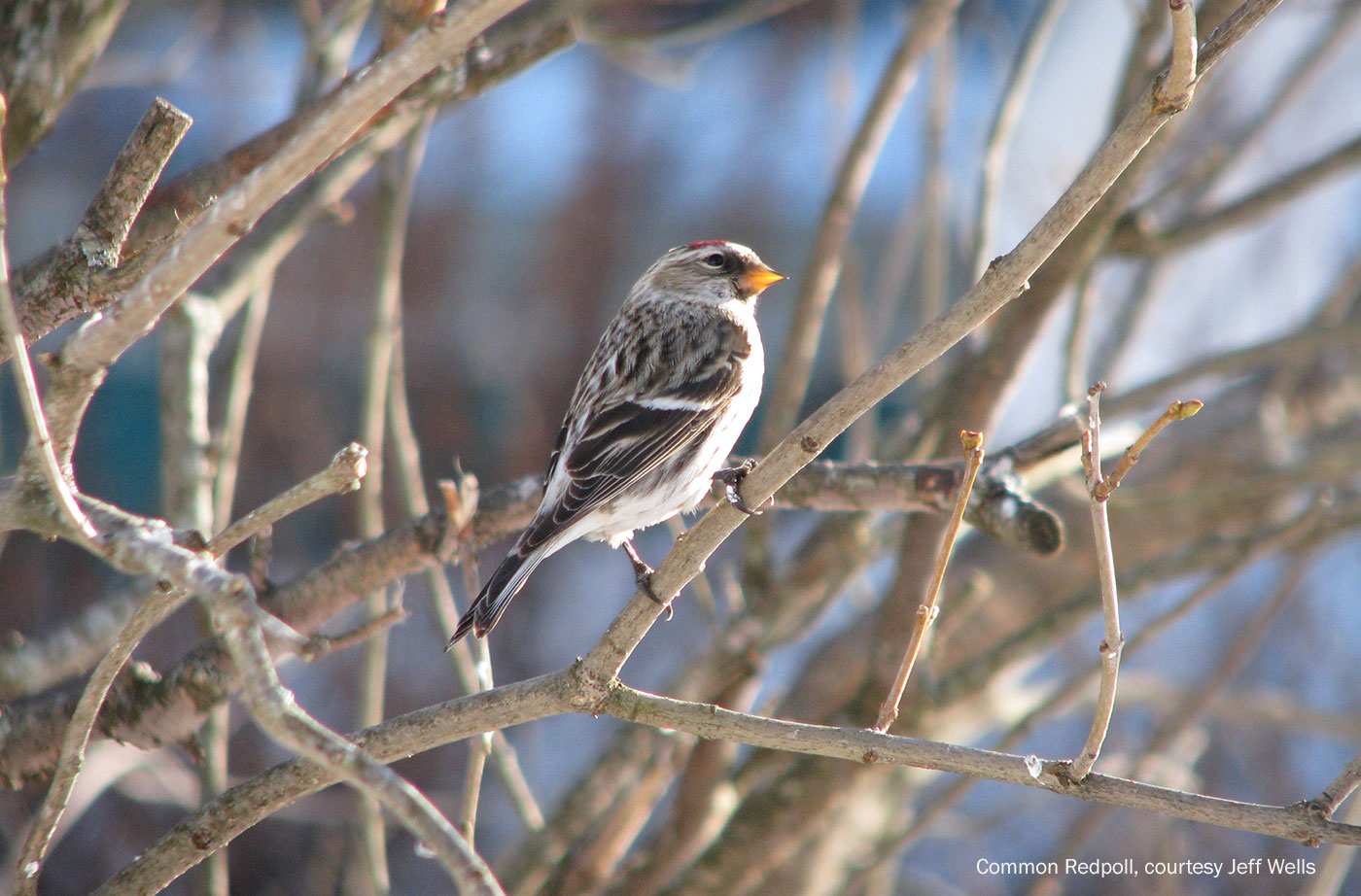 The Common Redpoll is an acrobatic feeder and can frequently be seen hanging upside down as it picks at a catkin. When a flock is intensively feeding in a birch grove, the sound of many loose seeds dropping to the ground can sometimes be mistaken for light rainfall. A redpoll rarely feeds on the ground, but after such a free-for-all it may fly down to glean fallen seeds from the forest floor.

Unfazed by the cold, the little songbird’s restless comings and goings are fueled by almost constant feeding. Studies estimate that it eats more than 40% of its body mass every day in the winter. A special, expandable pouch in its throat allows it to store seeds gathered quickly in cold weather, which it can then eat in a warmer, sheltered spot over the course of several hours. According to the Cornell Lab’s Project FeederWatch, those hoping to attract a redpoll flock to their yard would do well to offer Nyjer and black oil and hulled sunflower seeds.

The redpoll has been known to tunnel into the snow overnight for warmth and to “bathe” by immersing itself in wet snow. In fact, this species thrives in cooler temperatures and is thus very vulnerable to climate change. While the population of Common Redpolls is currently healthy, climate change analyses by National Audubon project that an average temperature rise of only three degrees Celsius would eliminate 86% of the bird’s breeding range. In such a scenario, the sporadic winter visitations of these pretty little chatterboxes would quickly become not just a special occasion, but a thing of the past.

Kristen Lindquist is a birder, naturalist, and poet living in Camden, Maine. She was grateful to see a big flock of Common Redpolls this winter during the Christmas Bird Count.