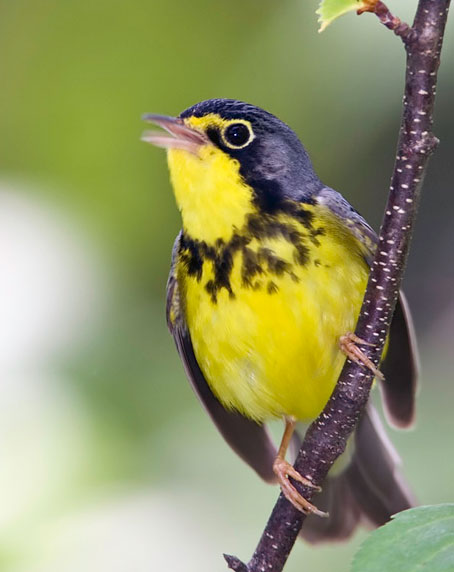 Cool fact: A flurry of feathers rustling in ferny, shrubby thickets is all that is often seen of the bird, as Canada Warblers are secretive.

The Canada Warbler is one of the latest arriving of the 26 warbler species that split their lives between Maine and the tropics of Central and South America and the Caribbean. Only some are lucky enough to see a Canada Warbler, usually after hearing the male first: a chip and then a snappy, exuberant warble, described memorably in Roger Tory Peterson’s classic Field Guide to the Birds as “chup, chupity, sweet ditchety.”

The male sings from a perch on a mossy branch low in the bushes, in a forest of mixed evergreens and hardwoods, a stream trickling nearby. He is a small warbler, bright yellow below and blue-gray above, except for splotches of black that form a necklace across his yellow breast (“as round and black-flaming as a rising sun,” wrote poet Galway Kinnell). Black trim framing the yellow throat quickly fades to gray along the head and back. His large, black eyes are encircled in a thin ring of yellowish-white.

Between songs, the male is prone to hop from branch to branch, snacking on spiders and hawking insects from the air. He is here in Maine for the breeding season and helps tend his young in a nest hidden beneath a loosened root, or in a hollow of moss amid crowded plant stems, or the folds of a moldering stump. “It gives a decided preference to mountainous places, thickly covered with almost impenetrable undergrowths of tangled shrubbery,” wrote John James Audubon, who painted the Canada Warbler on a flowering branch of rhododendron. He knew it from the slopes of the southern Appalachians, and from the North Woods: “I found it breeding in the Pine Forest, and have followed it through Maine, New Brunswick, Nova Scotia, Newfoundland, and the country of Labrador, in every portion of which, suited to its retired habits, it brings forth its broods in peaceful security.”

Throughout its range, the population of Canada Warblers has been declining for decades—by 62 percent between 1970 and 2014, according to Partners in Flight. The State of Maine Wildlife Action Plan designates Canada Warbler as a Priority 2 Species of Greatest Conservation Need. The International Union for the Conservation of Nature cites a lack of knowledge as another major threat to the Canada Warbler.

A flurry of feathers rustling in ferny, shrubby thickets is all that is often seen of the bird, as Canada Warblers are secretive.

Even fewer are seen now.

Scientific studies have identified changes in forested landscapes as a result of development, high levels of deer browse in some areas, and logging as threats. Some studies suggest that Canada Warblers can coexist with working forest landscapes if logging is carried out in ways that retain understory shrubs and other habitat structures.

No matter how the forest is managed, Maine will not be as hospitable for the Canada Warbler in the future, with half of the suitable habitat disappearing even if greenhouse gas emissions are drastically reduced. The National Audubon Society’s new report Survival by Degrees forecasts the future of 604 North American bird species under different global warming scenarios. With unabated continued output of carbon dioxide and methane, the Canada Warbler will abandon Maine entirely, shifting north as the boreal forest spreads closer to the Arctic Circle. But with major efforts to quickly reduce overall greenhouse gas emissions, it may be possible to retain Canada Warblers as a breeding species within the state.

Beyond stopping planetary pollution and preserving the survival of the boreal forest, our best hope for ensuring the Canada Warbler’s future is to respect his desire for privacy: thick, brushy cover near water in summer woods; wild shrubby sections of parks and fields during spring and fall migration; shaded coffee plantations and dense forests of the northern Andes Mountains in South America.

If we do this, like John James Audubon himself, we might still know the Canada Warbler, “and other sylvan choristers, equally fond of their wild retreats, skipping in all the freedom of nature around us.”

Science writer Catherine Schmitt now writes about birds for Schoodic Institute at Acadia National Park. She has written many Creature Features for NRCM. For more of her writings, visit her website at catherineschmitt.com.